Pennsylvania men stole crab meat by stuffing it in their pants, police say 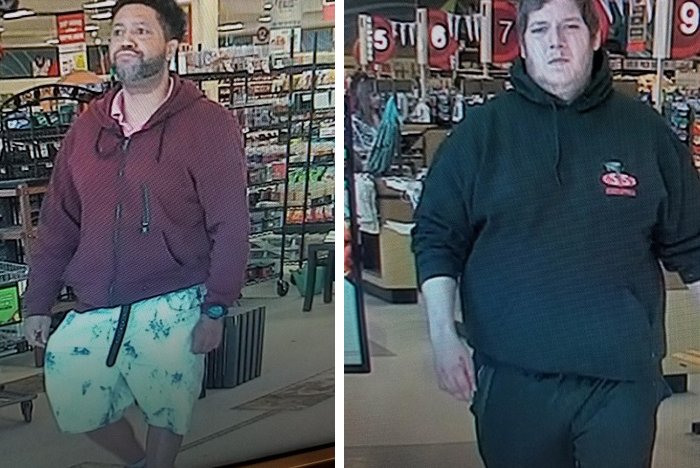 The two men pictured here are suspected of stealing crab meat from a Cumberland County Weis Markets by placing the seafood in their pants.

Two Pennsylvania men are accused of stealing crab meat from a Weis Markets grocery store by shoving packs of the seafood into their pants.

The Lower Allen Township Police Department in Cumberland County is searching for the men who police said were caught in the act, multiple times, on security cameras earlier this week.

The first alleged theft happened the evening of June 2, when the men entered the store on Lowther Road near Camp Hill. Police said one man put nearly $42 worth of crab meat in his pants. Then two men then left the store without paying for the items. The other man then returned to the store to return one pack of crab meat, receiving cash back.

The second alleged theft happened the afternoon of June 4, when the same two men performed the same routine at the same store, police said.

On its Facebook page, the police department noticed that a black, hooded sweatshirt worn by one of the suspects in the picture above has the logo of the SS Storm Chase and Forecast Team, an independent weather-tracking organization based in Pennsylvania.

The police tagged the SS Storm Chase team in a comment and asked if anyone could help identify the man to no avail.