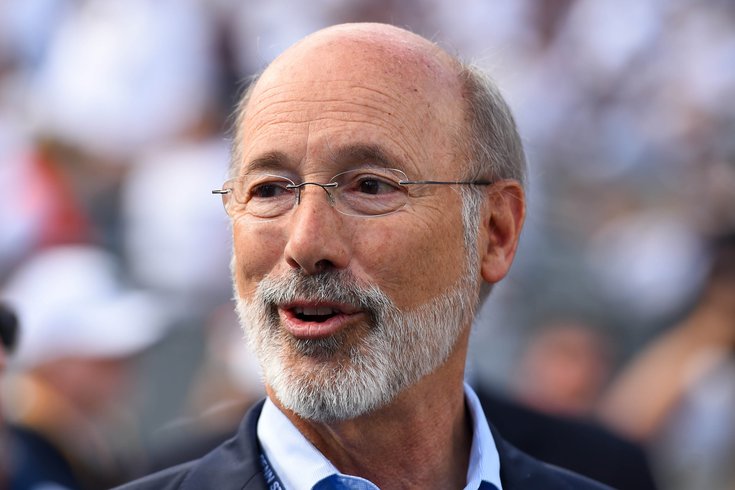 Both Pennsylvania Gov. Tom Wolf, above, and New Jersey Gov. Phil Murphy have called for a coordinated regional approach to reopening the economy after the COVID-19 crisis.

Pennsylvania Gov. Tom Wolf and New Jersey Gov. Phil Murphy defended their decisions to enter into a regional coalition tasked with identifying the best path forward from the COVID-19 crisis.

The governors emphasized the need for a multi-state approach to reopening the economy in press conferences Tuesday. But they stressed the federal government will play an important role too.

Their remarks came after President Donald Trump claimed he has "total authority" to end the coronavirus-related shutdowns implemented across the United States.

Wolf said it remains the states' responsibility to determine the timeline and approach for lifting restrictions.

Wolf also commended the federal government for being “as responsible as they possibly can given the scarcity of resources that the nation faces."

Pennsylvania, New Jersey and Delaware joined a seven-state regional council tasked with creating a blueprint for reopening the Northeast. Each state is represented by its governor's chief of staff, a public health official and an economic development expert.

New York, Connecticut, Massachusetts and Rhode Island also are part of the council, which will consider economic, social and scientific data to develop a plan that reopens the economy while minimizing the risk of spreading the coronavirus.

A trio of states on the West Coast, including California, also have joined together to determine the best path forward there. Nine of the 10 states are run by Democratic governors.

In a tweet, Trump compared the governors to the mutineers depicted in the 1962 film "Mutiny on the Bounty," saying that "a good old fashioned mutiny every now and then is an exciting and invigorating thing to watch, especially when the mutineers need so much from the Captain."

When asked about the tweet, Murphy said reopening the economy calls for an "and-both" solution, saying the federal government and neighboring states need to work together.

“We’re the densest state in the nation and we sit in the densest region of the nation,” Murphy said. “We would be abdicating our responsibilities if we first and foremost didn’t do what we needed to do within the four walls of New Jersey. But we gotta make sure we’re at least harmonized, if not more so, with our neighbors. That’s an absolute necessity."

Having different sets of restrictions in the Philadelphia and New York City metropolitan areas, which straddle state lines, could result in an "unintended consequence," Murphy said.

"We have to have that same level of coordination as we begin to think through what we’re gonna need to reopen," Murphy said. "We’ve just put more of a specific ring around this calling it a council.”

He insisted this is not in lieu of cooperation with federal officials.

“You need both. There’s no substituting the federal government of the United States of America in any challenging period, let alone a once-a-century healthcare crisis," Murphy said. "There’s no substitution for that big gorilla. I can say with great confidence that we need the administration. We need the federal government and the full force of it, and I can say with a similar passion that we need the same reality with our regional partners.

"Both of those statements can stand. They’re not at odds with each other, nor the actions which underpin them.”

Pennsylvania and New Jersey have instituted stay-at-home orders and ordered non-essential businesses to shut down to help mitigate the spread of the virus.

Pennsylvania announced 1,146 new COVID-19 cases, bringing the state’s total to 25,345 as of Tuesday afternoon. There have been 584 deaths. Philadelphia and the four surrounding counties in Southeastern Pennsylvania have 13,124 positive COVID-19 cases and 312 deaths.

New Jersey reported 4,059 new COVID-19 cases, bringing the state’s total to 68,824 as of Tuesday afternoon. The state's 2,805 deaths are the second-most in the country. The majority of coronavirus cases have been in North Jersey. South Jersey has reported 3,806 cases and 92 deaths.