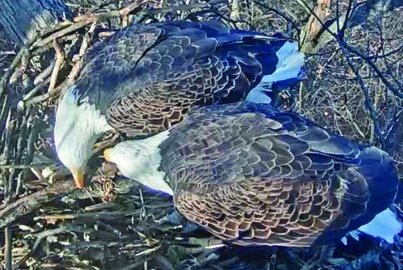 A screenshot from the Pennsylvania Game Commission's bald eagle cam.

Time wasters and wildlife aficionados alike have something to be excited about for the new year.

Pennsylvania's live bald eagle camera is back. The game commission announced Wednesday its live feed of a bald eagle nest in Hanover, York County, is up and running, 24/7.

There had been doubt whether the large birds of prey would return to the same nest in the 75-foot-tall tree adjacent to Codorus State Park.

Although two eaglets had hatched in the nest in March and took their first flights in June, the nest collapsed later in 2017 and fell apart again the last time the camera was online, the commission said.

Still, the adult eagles were able to rebuild their nest in the same spot, where they are settled in for the nesting season, which lasts from around December through June.

"We receive so many appreciative comments from people across the country, and teachers who use the livestream in their classrooms as a teaching tool," Codorus State Park operations manager Deanna Schall said.

The cameras have provided fascinating moments for viewers in the past, such as two bald eaglets feeding on a cat or the live births, as seen in the 2015 video below from Hanover.

Of course, game officials encourage Pennsylvanians to go out and try to see the real thing in person.

“While it’s always a thrill to see a bald eagle in the wild, the Game Commission’s Eagle Cam allows viewers to see bald eagles in ways they never could through binoculars or a spotting scope,” said Game Commission Executive Director Bryan J. Burhans.

You can watch the live bald eagle cam by clicking here.