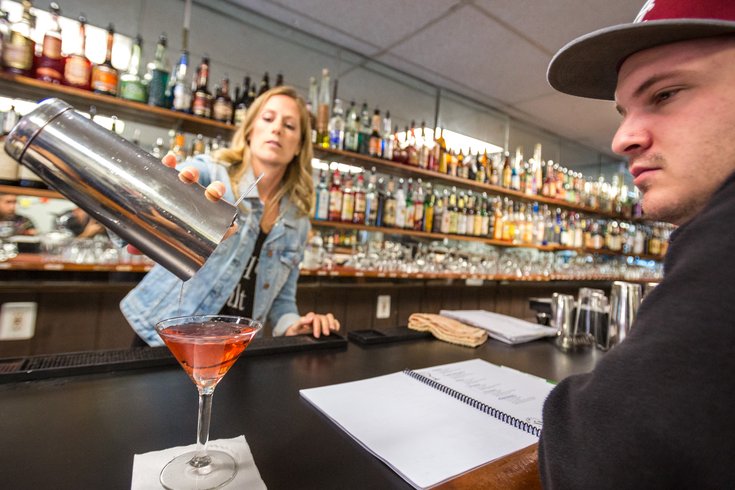 There’s more than one way to have a good time at the bar. Belly-up, draining a few pints — that’s not bad. But the people pouring the drinks are usually having a good time, too.

Tending bar is also a decent way to earn some extra cash in this gig economy.

“Tips from waitressing and Uber is good money, but bartending is way better money, and it’s more fun, and you can do it forever,” said Camille Parlman, a student at The Main Line Center for Bartending (MLCB) in Manayunk.

Tony Mamo, founder of MLCB, said his students leave the center with a new skill set, a new way to make money and an inroad to meeting new people.

“We’re a state-licensed bartending school that offers our students an official bartending certification,” he said.

“And we don’t just teach you how to mix a ton of different drinks. We have a wine seminar. We have a beer seminar. There’s an optional flair class. And we teach responsible liquor service so you know how to deal with drunk people and when to cut them off.”

Lifetime job placement assistance comes included with the school’s $585 tuition. Besides the hands-on training — pouring drinks, learning recipes — Mamo said this is the main benefit from taking a course in-person with him as opposed to one online.

“We legally can’t guarantee that everyone will get a job, but I’ve been doing this for 23 years, and everybody knows us. We get calls from bars, fine-dining restaurants, casinos, hotels, country clubs, catering companies, nightclubs — everybody.

“Especially when the economy was real bad, we were able to help people get jobs. And bartenders can make up to $200-$300 per night,” Mamo said.

A training course consists of 40 hours broken down into two workweeks or five Saturdays.

Mamo, who’s owned and operated the school since 1993, has taught more than his fair share of personalities, from students and professionals to an ex-NFL player whose post-football aspirations included owning a restaurant.

And he consistently gets students from all different ages — from 18 to 75.

“Some seniors take the class to get extra money for retirement. And some just do it for fun and use it to entertain guests at their homes,” he said. 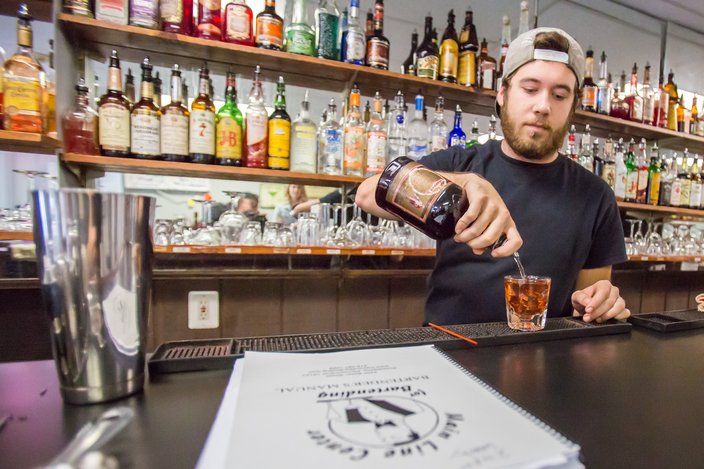 Demitri Grivas, a student at the Main Line Center for Bartending, mixes a faux drink from memory a day before his exam.

Mamo started bartending as a business student at Villanova to make some extra cash.

But, since high school, he’d been telling his family he wanted to own something. Around the time he graduated from Villanova, Manayunk was up and coming with plenty of bars and restaurants. All of those places would need barkeeps, he realized. Soon, he founded MLCB.

“I was a bit young and naïve on the difficulty of running a business,” Mamo confessed.

Appropriately, he had to tend bar while building his bartending school; the business devoured his finances in the early days. He attributes his eventual success as a business owner to having that after-hours income to pay bills.

Many students (including that football player) have followed in Mamo’s footsteps, using their skills to finance a venture of their own, a fact that Mamo said he is very proud of.

"Every week you meet different types of people. That keeps it fun.” — Tony Mamo, founder of Main Line Center for Bartending

Asked what keeps him going, Mamo replied, “Just the people you meet. Every week you meet different types of people. That keeps it fun.”

And, apparently, all that fun can lead to even greater things.

Mamo talked about running into a former student recently who told him he was able to pay off his student loans from bartending.

“But, more importantly, how he found his future wife. He met her when he was at our school. She was a part-time employee at the school when he took the class and they kept in touch and became friends and then started dating. Now they have two kids and are still happily married.”

Lastly, Mamo shared a recipe for one of his favorite seasonal drinks — his pumpkin martini:

“I use pumpkin spice liqueur with Pinnacle Whipped Cream vodka and a splash of Bailey’s Irish Cream. I shake and strain into a martini glass. I rim the martini glass with cinnamon sugar. It’s a great fall-time drink that everyone loves.” 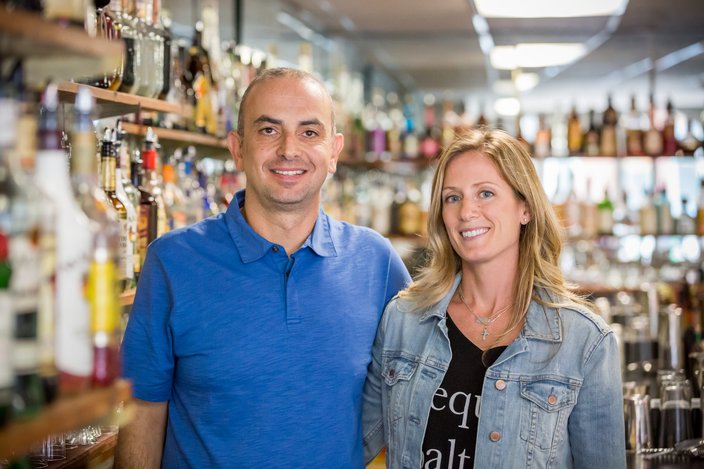