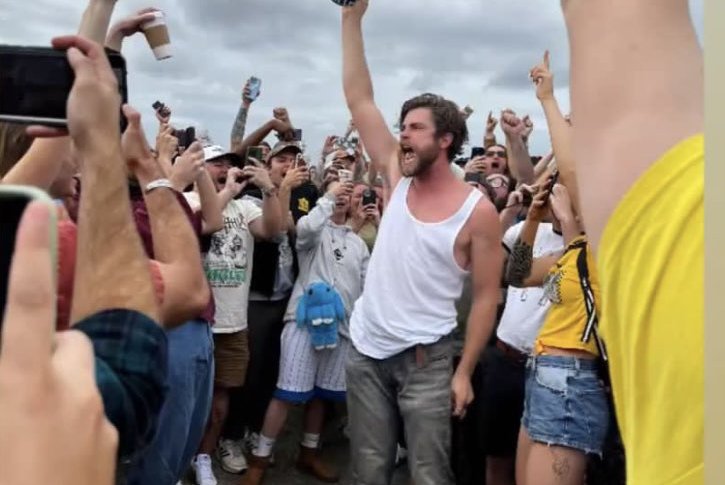 Alexander Tominsky, the Philly 'Chicken Man,' was challenged by PETA to go vegan for 40 days following his 40-day chicken binge. He declined, but has sworn off the bird and is encouraging fans to donate to community fridges and food banks to combat food insecurity.

Tominsky's feat was capped off by one last bird on Nov. 6 at an old pier near a Walmart in front of spectators who cheered him on as he scarfed down his meal.

In response to Tominsky, who garnered national attention, PETA, the animal rights activist group, issued a new challenge. They wanted the "Philadelphia Chicken Man" to go vegan. PETA said it would offer Tominsky a starter kit with a 40-day subscription to Purple Carrot, a vegan meal service, and supply him with vegan treats if he agreed.

Tominsky, however, had no interest in doing another food challenge. In a direct message exchange, Tominsky shared with PhillyVoice the same message he sent PETA.

"I can understand why my project would inspire you to reach out to me," he said. "At the moment, I cannot commit to any food challenges. However, I understand the symbolism of the offered challenge, and it does have me thinking about the cause and message your organization stands by. To counteract the 40 chickens I consumed, I plan to never eat chicken again. I also plan to cut back on the meat I eat but to choose a vegan lifestyle, I will not commit to it. I would feel like a hypocrite, considering I am using my new platform to help get donations for food pantries in the city of Philadelphia. Sixteen percent of all households in Philly face food insecurity. Turning down animal-based foods is just not an option I can accept. Regardless, I respect your organization has value, and you stand up for what you believe in."

In an email, PETA said it would have liked Tominsky to watch videos of chickens being farmed and killed before they are prepared to be sold and served as food.

"Each one of the 40 chickens eaten during this stunt was an individual who felt pain and fear and didn't want to die," PETA Vice President Tracy Reiman said in the email. "PETA can't bring these birds back, but we can help the 'Chicken Man' become the 'Vegan Man' and save the lives of nearly 200 animals every year."

Since concluding his chicken run, Tominsky, 31, has begun spotlighting organizations that help provide food for those in need. On Wednesday, he promoted the South Philly Community Fridge on Twitter, asking his followers to donate to combat food insecurity.

The South Philly Community Fridge later tweeted it had raised $858 that day.

In an interview with "Good Day Philadelphia," Tominsky likewise encouraged viewers to donate to the city food bank Philabundance.

But after completing his goal of 40 consecutive days of eating an entire chicken, Tominsky told the "Good Day Philadelphia" crew that he actually hates the meat. Consuming so much daily poultry left him cramped and bloated, he said.

"I'm happy it's over with," he told the New York Times. "My body is ready to repair."

PETA agreed with his sentiment, albeit for different reasons.

"He was correct. Birds killed for their flesh are bred to grow such naturally large upper bodies that their legs often become crippled under the weight," a press release from PETA said. "In addition to sparing animals daily suffering and terrifying death, each person who goes vegan slashes their risk of suffering from heart disease, diabetes, strokes and cancer."

In 2020, Vox reported that farm-bred chickens are often overfed and in perpetual pain as they're farmed to be killed and sold to meat plants. Consumer labels like "humanely raised" and "free-range" are often misleading, Vox continued, and while free-range options exist, they are more expensive.

Tominsky's chicken challenge brought joy to Philadelphians. "It just seemed right, and I think that the people of Philadelphia and maybe the world would agree," he told "Good Day Philadelphia." Now, he is helping those in need find access to food.

Nonetheless, by also promising to never eat chicken again and consume less meat altogether, Tominsky's strange journey is a win for both PETA and struggling communities in Philadelphia.