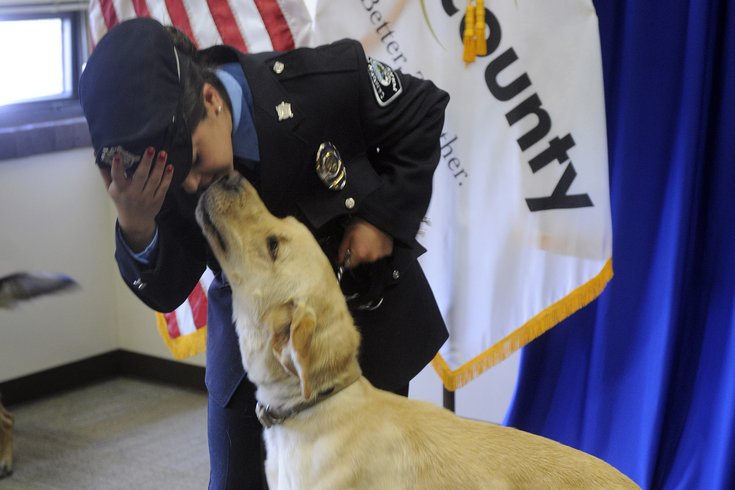 Detective Gabrielle Camacho, with her partner, Peyton at the headquarters of the Camden County Police. She and Peyton will be first when deployed in mid-June. She is the first woman in the K-9 unit. Peyton is the first Labrador retriever.

The first Labrador retriever assigned to Camden’s K-9 unit hits the streets of Camden in mid-June, with the dual objectives of sniffing out narcotics and spreading goodwill.

Camacho joined the Camden County Police Department, which patrols the city of Camden, two years ago.

Being a cop and having a dog as her partner are just part of who she is as a person.

Camacho grew up in adjoining Pennsauken in South Jersey, watching her dad go off to work as a police officer in Camden.

So blue is in her blood.

But dogs are imprinted on her soul.

“I love dogs. I’ve always had a dog. I had three before Peyton, so now I have four. It’s a cool thing having a dog as a partner,” she said.

At 18 months, Peyton is like a rambunctious and happy-go-lucky teenage boy. He is intently focused on his partner and has a friendly personality, less guarded than some of the shepherd dogs already in the K-9 unit.

Peyton is so prone to whipping his long tail when happy that he’s cut it. For now, his tail is covered in a layer of protective tape.

That wonderful personality is why he’ll do lots of community outreach events in Camden, explained Camacho.

A hunting breed, Peyton’s other strong suit is his nose. Camacho said he’s been certified as a narcotics detecting dog.

Meeting reporters in the department’s headquarters, she could tell he was tugging at her, excited because they were near the evidence room.

The American Humane Society has donated body armor dog vests to the department, which would have cost $2,100 for each of the unit’s eight dogs.

Camacho shrugged off being touted as the department’s first female K-9 handler.

“At the end of the day, it doesn’t matter if you are a male or a female. We’re all here to do the same job,” she said.