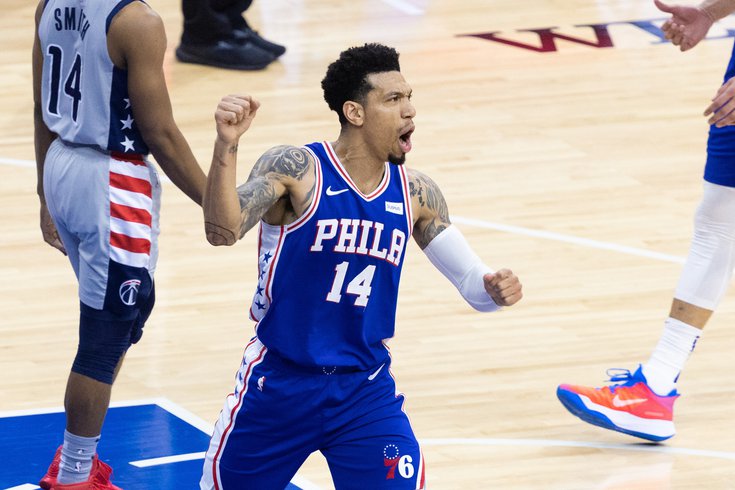 Danny Green said he's excited and ready to learn all about what Philly has to offer in his second season with the Sixers.

Sixers fans, start preparing your Philly restaurant and sightseeing recommendations for Danny Green. The man is eager to finally explore the city this upcoming NBA season.

During an appearance on Sports Illustrated's "The Crossover NBA Show" Tuesday, the Sixers guard was asked by host Howard Beck about why he chose to stay in Philly this offseason on a two-year deal worth $20 million.

The three-time NBA champion cited a number of factors for his free agency decision, including the organization, the opportunity to play for a contender again, his teammates and the 76ers fans — the same fans he was critical of earlier this summer.

But the 34-year-old said that what he's most excited for this year is the opportunity to finally learn all about what Philly has to offer after the COVID-19 pandemic all but prevented any such opportunities last season.

"The biggest thing that I'm looking forward to is being out in the community," Green told Beck. "Learning Philly. Obviously the history and museums, the people. But doing Christmas and Thanksgiving drives, those kinds of things. Having our fans [at the Wells Fargo Center] for the whole year, not just the end of the year."

"I've been in the league for quite some time now. I don't think I've ever been out in Philly," Green continued. "I've experienced the restaurants but I've never experienced a night out in Philly. So experiencing that and the things the city has to offer. That's the biggest thing I'm looking forward to coming back."

Philly sports fans love players who embrace what the city and region have to offer, so the 76ers faithful will be more than happy to see Green engage with the community like many of his teammates have during their tenures in Philly.

Green was a valuable veteran piece on last year's team. He and Dwight Howard played in the most number of regular season games, and Green was top five on the team in minutes per game.

Only Ben Simmons, who by all accounts is on his way out of Philly after demanding a trade, and Matisse Thybulle averaged more steals per game than Green, and he finished second to Seth Curry on the team in three-point percentage.

But Green had a lot of motivation to return to Philly for the 2021-22 season after suffering a year-ending calf injury during the Eastern Conference semifinals against the Atlanta Hawks. Green's defense and three-point shooting were sorely missed as the Hawks sent Philly packing in seven games.

MORE: Danny Green explains why he re-signed with Sixers and why he's giving Ben Simmons space

Green told Beck that the calf injury was about as bad of an injury he's ever had in his career. Had he stayed healthy and not gotten banged up, Green said it might have made a difference in the series.

"I've never had any major injuries really," Green told Beck. "I've had a broken finger before but that was during the season. I've had some stitches here and there. I've had a couple of random sprains, things like that. I've never been injured in the playoffs. That's the most important time of the year and at a time where I felt my team needed me most, where I felt like we could've actually got over that hump had I been playing."

"I think I could've helped hopefully get us to at least the Eastern Conference Finals," Green continued. "But I thought we had a good pathway if we stayed healthy. Me being a part of that, if I stayed healthy, I think we had a really good shot at it. But the healthiest teams that are playing the best are the ones that are the last teams standing and that was Milwaukee this year."

Would a healthy Green have kept the Sixers from losing three of the last four games in the series? Maybe.

Would Green have been enough to overcome Simmons' offensive ineptitude? Probably not.

Nevertheless, Green and the Sixers know that health will be of utmost importance come playoff time this upcoming season.