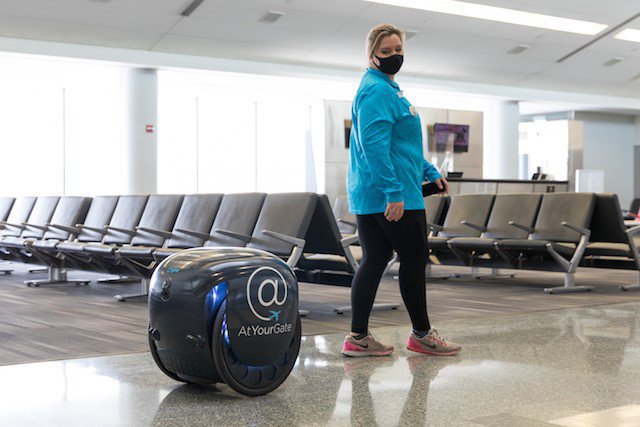 The Philadelphia International Airport's self-operating robot is looking for a new name. The robot, pictured above, follows a team member using bluetooth technology.

The robot, part of PHL's service that allows people to order food from airport restaurants and have it delivered to their terminals, was put into service in late February, offering a contact-less delivery option for travelers.

"You loved our new robot, Gita," a video tweeted by the airport's PHL Food and Drinks account on Monday says. Gita is the manufacturer's name for the robot. "And now PHL Food & Shops needs your help naming it."

We need YOUR help! Our new food delivery robot needs a name and we want you to help us pick one! DM us your favorite name and we will pick a winner in the upcoming weeks.🤖✈️🍕@PHLAirport @atyourgate pic.twitter.com/Twcv07mAiE

The self-operating robot uses visual sensor technology to pair with and follow an AtYourGate team member while carrying travelers' orders inside its hatch.

Philadelphia is the first and only city in the country to launch an integrated meal delivery service for passengers using the robot. The airport said the robot will be around through at least April 2021.

To name the robot, direct message your ideas to @PHLFoodandShops. The airport said it would announce the winner sometime int the coming weeks.

Editor's note: A previous version of this story incorrectly stated the robot used bluetooth technology and visual sensors to travel. Also, the Philadelphia International Airport is not the first and only in the U.S. to have the robot. It is the first, however, to launch an integrated meal delivery service for passengers.