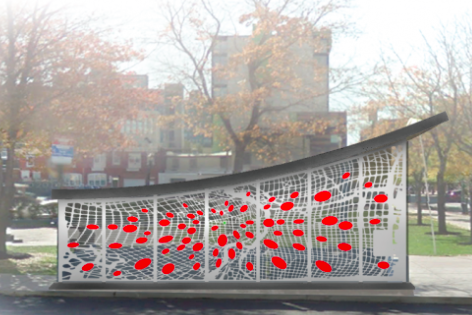 The Philadelphia Art Commission has unanimously approved designs for four new public art installations that will serve as headhouses in SEPTA's renovation of 40th Street Station on the Market-Frankford line.

The project, named Nexus, was designed by artists Marianne Lovink and Scott Eunson as part of SEPTA's Art in Transit program, which aims to provide aesthetic enhancements at stations and facilities to foster community pride and create visible landmarks for Philadelphia residents and visitors.

According to Plan Philly, the four headhouse designs depict "a distorted Philadelphia street grid focused on 40th and Market," with colorful patterns on each entrance.

In their proposal, Lovink and Eunson emphasized that the patterns on each headhouse reflect Philadelphia's interconnectedness, the flow of its waterways, its public green spaces, and the digital information systems that link residents together to share ideas and communicate.

The installations are part of SEPTA's $7.4 million construction project at 40th Street Station, including two elevators at the northeast and southwest corners of 40th and Market streets, which will make the station ADA compliant. There will also be repairs to the station's platforms, upgrades to mechanical and electrical systems and improvements to employee facilities.