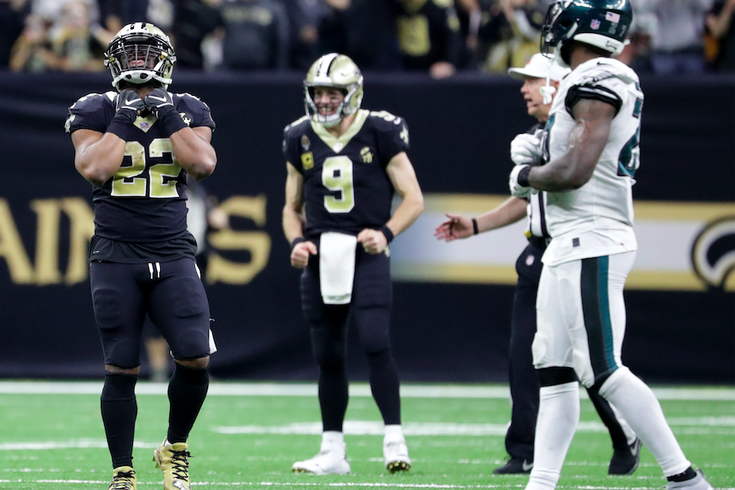 The Philadelphia Eagles fought hard and came up short Sunday night New Orleans — and hey, to the victor go the spoils.

But a familiar pair of Saints players proved they couldn't take the win gracefully. In fact, the whole team lamely copied the Eagles' inspiration for last year's Super Bowl run.

In their post-game locker room interviews, running backs Mark Ingram and Alvin Kamara again put on ski masks to mock the Eagles defense, which had used the masks as a motivational tool to generate turnovers since December.

Ingram and Kamara wore the masks themselves back in December before the Eagles had even clinched a playoff berth. It's a bit bizarre that they seem so fixated on pouring salt in the Eagles' wounds, especially considering the Saints had been heavily favored to win Sunday's game. They only did so narrowly.

It gets worse. The Saints celebrated as a team by playing Meek Mill's "Dreams and Nightmares" in the locker room, the song the Eagles used as their rallying cry last season.

The Saints are partying to Dreams and Nightmares. THE DISRESPECT. pic.twitter.com/8KAnS32AAy

Can't they come up with anything on their own? Usually, there's a tendency to root for the team that beat you to have success in subsequent playoff games, but nothing would be sweeter than watching the Los Angeles Rams upset New Orleans at their own home next weekend.

Call me soft or whatever but this Saints team is a bunch of punks with the exception of Drew Brees. They have the cockiest attitude, mocked the Eagles with the ski masks all week long, and blasted Meek postgame smh. For all that the Rams will end their season on Sunday. #karma

If the saints don't win it all they're gonna look pretty dumb with their ski masks and playing our song.. At least when we broke at the dog masks we won it all #Saints