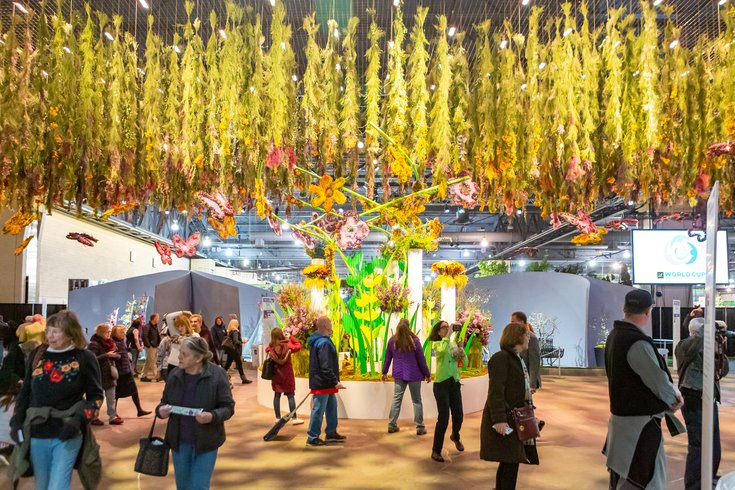 The Philadelphia Flower Show will return to its traditional indoor location – the Pennsylvania Convention Center – in 2023 after two years at FDR Park. Above, a display from a previous show held inside the convention center.

On the heels of another successful Flower Show, the Pennsylvania Horticultural Society revealed plans Tuesday to bring the annual event back indoors next year.

The 2023 PHS Philadelphia Flower Show will be held at its traditional location – inside the Pennsylvania Convention Center – from March 4-12. Additional information, including its theme, have not yet been announced.

For the past two years, the Flower Show has been held at FDR Park in South Philadelphia, its first outdoor venture since the horticultural festival was founded in 1829. This was largely due to COVID-19 concerns, as large-scale indoor events had yet to fully return.

Returning indoors allows PHS to bring back the large, float-style floral displays the event has been known for over the last few decades.

"After two monumental years of producing the Flower Show outdoors, our return to this venue brings us back to our indoor home and the ability to create a colorful and fragrant beginning to the spring season," said Sam Lemheney, chief of shows at PHS.

The Convention Center has been the primary home of the Flower Show since 1996. The first public show was held in June 1829 at the former Masonic Hall on Chestnut Street. It also had been held at the now-demolished Philadelphia Civic Center before moving to the Convention Center.

Though PHS managed to put on two expansive shows outdoors, Lemheney told the Inquirer that PHS always intended to bring the show back indoors when the time was right.

He said the organization will continue to work closely with Philadelphia health officials to determine the safety and feasibility of returning the show to its pre-COVID roots.

Still, crowds at the outdoor event did not match the crowds traditionally present at the Convention Center, and Flower Show organizers hope that bringing the event indoors will boost attendance.

At this year's Flower Show, which wrapped up Sunday, more than 30 exhibitors took home PHS Awards for their expansive, decorative floral and gardening displays.

The illustrious "PHS Flower Show Cup - Best In Show" went to Mark Cook Landscape & Contracting. Cook previously won the highest Flower Show honor in 2020 and 2017, and won the silver trophy in 2014, 2018 and 2019 for his on-theme representations and garden designs.

Fans of the flower show can check out the PHS website for regular updates as organizers gear up for next year's event.