Philly named 'City of the Year' 2018 by GQ Magazine 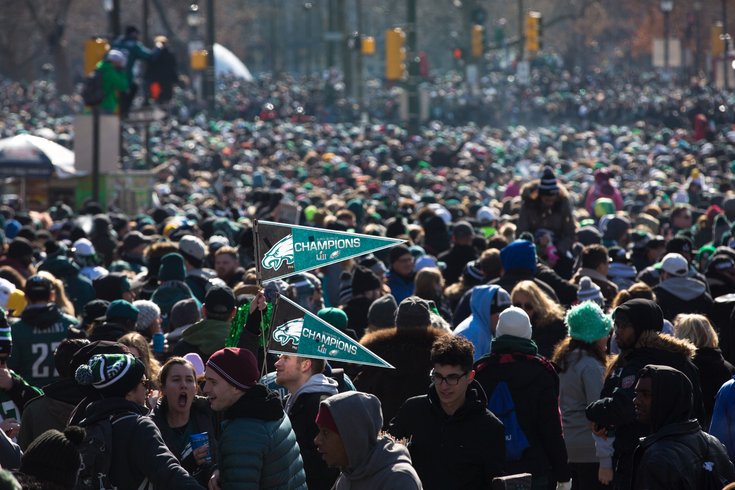 Was there ever any doubt that Philadelphia deserved to be named America's best city in 2018?

The entire year has been spent in a fever dream over the Eagles' first Super Bowl victory. The packed streets from South Philly leading all the way to the Museum of Art, where hundreds of thousands of fans celebrated in February, set a tone for the rest of the year.

GQ Magazine revealed its City of the Year in a two-page spread for its latest print edition. The piece, "Philly (Is) Special," was written by Zach Baron, a Germantown native who's since relocated to Los Angeles. He may be a homer, but it's not as if he hasn't seen the country's metropolitan offerings. L.A. gives you clown pants. Philly gives you championships.

In Baron's view, this year stood in such stark contrast to Philadelphia's history of lovable losing — going back to Revolutionary War battles and the turning point of Valley Forge — that the winning spirit of 2018 has to be commended on a national scale.

Eagles players became activists, speaking out about the flawed criminal-justice system. Donald Trump disinvited the team from visiting the White House out of spite; our mayor, Jim Kenney, then called our president “a fragile egomaniac obsessed with crowd size.” Our recently elected District Attorney, Larry Krasner, is the most progressive D.A. in the entire country. Our restaurants now regularly grace Bon Appétit’s Best New Restaurants list. Will Smith joined Instagram and immediately became incredible at it. You don’t have to sell your plasma or your soul to afford an apartment in the city. It just feels … different in Philadelphia these days. Downright victorious, even.

The clincher in all of this was the debut of Gritty, whose ascension symbolizes the ugly duckling and underdog narratives that turned the tables for Philadelphia in 2018. What other mascot in America sinks a half court shot with this much grace?

The GQ designation follows a few years of growing attention for Philadelphia, which hosted Pope Francis in 2015 and was named the country's best place to visit by Lonely Planet the following year. Philadelphia became a World Heritage City. There was the Democratic National Convention in 2016 and the NFL draft in 2017. It's a place whose attractions and character are finally gaining wider respect in the present day, not just appreciation for their place in history.

But if the Eagles regressing to the mean is any lesson to the city as a whole, we might want to watch out for a hangover in 2019.