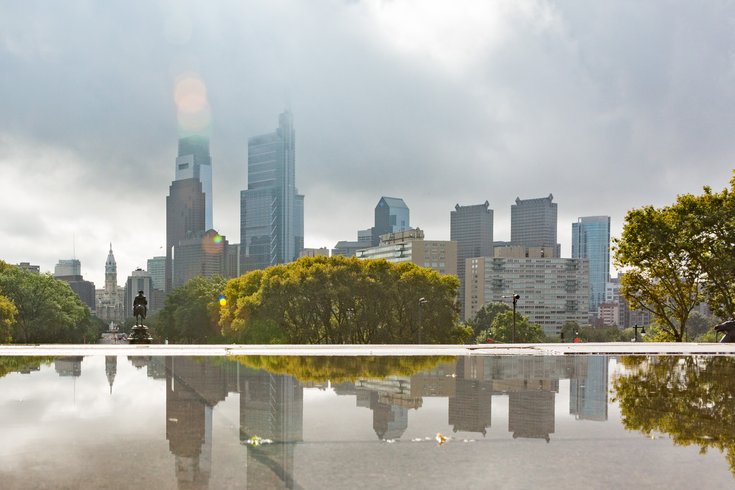 The Philadelphia skyline reflects from a puddle after an early-morning rain storm.

State Sen. Anthony Williams has publicly called on Pennsylvania Gov. Tom Wolf to declare a state of emergency over the surge in gun violence in Philadelphia.

Williams, a Democrat representing Philadelphia, wrote Wolf a letter on Monday urging state action to stem the increase in shootings. The violence was headlined by a Father's Day rampage that left one man dead and five others wounded at a graduation party on Sunday. The incident occurred in Williams' district in Southwest Philadelphia.

"After yet another several days filled with record homicides in Philadelphia, as an elected official I am embarrassed by our lack of action," Williams wrote. "As a husband, father and neighbor, I am frustrated, scared and angry. This level of loss of life should be met with the same dignity and urgency with which we address any other mass shootings in America."

Nineteen shootings occurred in Philadelphia over the course of the past weekend, leaving six people dead and 28 others injured.

Williams noted that the rate of homicide will likely continue to rise during the summer months ahead.

"We must restore some level of public confidence by addressing this epidemic," Williams continued.

The letter calls for Gov. Wolf to declare a state or emergency or crisis immediately, similar to what Wolf has done repeatedly to address Pennsylvania's opioid epidemic.

Last week I renewed the disaster declaration for the heroin and opioid crisis in Pennsylvania.

We won't stop fighting until this epidemic stops claiming the lives of Pennsylvanians.

Williams is also calling on other leaders to get together and develop a coordinated plan to reduce violence.