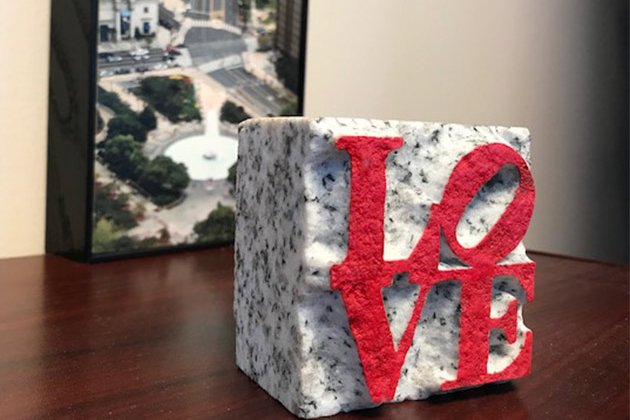 More than a year after LOVE Park's greatest admirers lined up to buy a piece of Philadelphia history, the granite keepsakes the city once promised will finally be available for purchase for some.

Around Thanksgiving 2017, the Department of Parks & Recreation had planned to sell the granite blocks carved with a likeness of the LOVE Statue for $50 apiece to support the maintenance of existing skateparks in Philadelphia — a consolation to a skateboarding community that lost one of its most iconic locations when the original LOVE Park was redesigned.

The plan fell apart when the foundation representing the late artist Robert Indiana, who created the LOVE statue, issued a cease-and-desist letter to prevent the use of his ubiquitous image. Those who waited in line were able to put their names on a list to be contacted whenever the matter was resolved.

It's taken about 14 months to get the proper permissions, but the Parks & Recreation confirmed to KYW that the three-inch-by-three-inch granite blocks will soon be available again.

“Anyone with an emotional attachment to the original Love Park will treasure owning one or more of these mementos," Parks & Recreation said at the time of the original announcement. "People traveled from around the world to walk through the park just before the renovation project began, and now you can buy a little piece of that Philadelphia history to enjoy in your own home.”

But there could be more issues. For the pilot launch, Parks & Recreation had made just 250 keepsakes. Even with a limit of two per person, not enough granite LOVE blocks were made to fulfill the number of orders taken in 2017.

The department and SkatePhilly had salvaged 150,000 pounds of the original LOVE Park granite for use in future skateparks, and it plans to use some of it to create more keepsakes. However, Parks and Recreation Commissioner Kathryn Ott Lovell told KYW, those will not be carved with a replica of the LOVE Statue, but rather a the park's logo.

PhillyVoice reached out to Parks & Recreation for additional information about the availability and design of the new keepsakes and will update the story when we have more information.

The redesigned LOVE Park opened last year to mixed reviews, but has gradually caught on as a place for public gathering.