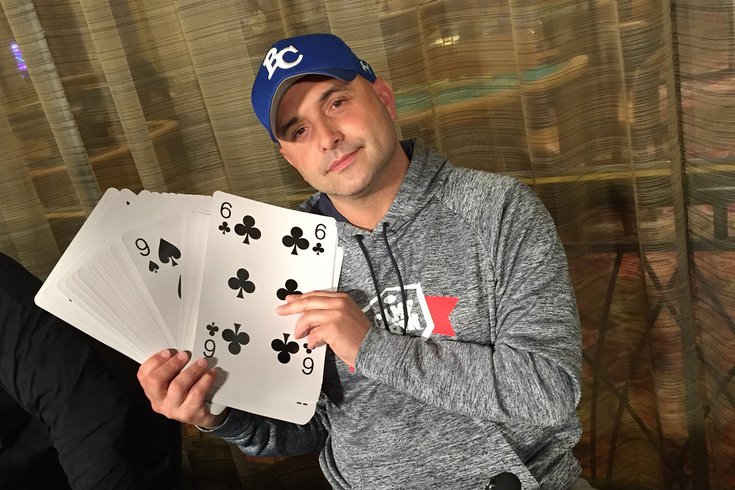 A brilliant sun falling through coiled barbed wire opens HBO’s excellent documentary “Wild Card: The Downfall of a Radio Loudmouth.” It’s cryptically symbolic, since that was once Craig Carton, a shining star who fell supine into a gully of razors.

Carton, 51, who worked in Philly at WIP in the mid-1990s and could return to the city in the not-so-distant future, is the subject of the 76-minute cautionary tale that airs Wednesday, Oct. 7 (9 p.m.). Once the king of sports talk radio, Carton co-hosted the Boomer and Carton morning show with Boomer Esiason on 660 WFAN in New York.

Carton was reduced from living in a $2-million mansion to a dank, gray cell with nothing but a cot, a chair and a toilet in a U.S. Penitentiary, where he served slightly more than 12 months of a 42-month sentence for defrauding millions from investors in an illicit ticket-selling Ponzi scheme to offset a gambling addiction.

Every step of his collapse seemed freeze framed with schadenfreude by the New York city tabloids. It was national news when Carton was arrested in September 2017, complete with a perp walk in a white hoodie down a Manhattan street.

In “Wild Card: The Downfall of a Radio Loudmouth,” Carton takes a sobering reflection of where he was on the sports media landscape, what he lost and how he lost it to a hidden master, a deck of cards at a blackjack table.

He’s been polarizing everywhere he’s gone. The Craig Carton that was in Philadelphia was somewhat of a contemptible figure, a sort of arrogant, full-of-himself persona. Someone easy to dislike.

The post-prison Carton is humble and evolved; someone worth redeeming. He comes across far more transparent and palatable. Though you can’t help but believe that this is Carton’s attempt — though an honest one — to rehab his image. This is Carton falling on his sword, per se.

Carton makes it clear in the documentary that he wants to return to radio.

What’s more is Carton’s return may be on the Philadelphia airwaves. Numerous local radio sources confirm, as does the New York Post’s Andrew Marchand, that Carton has a “firm offer to work mornings at Philadelphia’s 97.5 The Fanatic,” if he does not take a job at WFAN. On Tuesday, however, Marchand reported that a return to WFAN is getting close, but is not yet a done deal, citing the offer from the Fanatic.

Where he goes next is anyone’s guess. But he is a talent. Sports fans want to hear what he says next.

Some radio insiders feel Carton, who was making more than $2-million a year, is using 97.5 The Fanatic as leverage to get back to WFAN. Plus, a move with mornings at 97.5 The Fanatic seems odd right now, considering the morning show is trending up.

Ratings have never been higher, including beating benchmark WIP in a few weeklies in the latest ratings period for the first time in the station’s history (in the 18-to-24 demographic, 97.5’s morning show is the second-highest rated in the market behind Beasley’s Preston & Steve show).

The Fanatic’s afternoon drive time host Mike Missanelli’s contract is up in December, multiple sources confirmed. Though Missanelli’s ratings have recently slid, that may have more to do with his radio audience being diluted by the NBC Sports Philadelphia simulcast.

What helps Carton is his relationship with Joe Bell, the VP/Market Manager at Beasley Media Group, the parent company of The Fanatic.

“Where Craig fits in at 97.5 is anywhere,” a major radio source said. “That will come at a cost, though not at $2-million a year.”

“Craig is a good man, who did a bad thing, but he’s not a bad person and he will recover from this professionally,” said Marc Rayfield, the former senior vice-president, market manager of CBS radio by way of WIP. “Craig is very collaborative; a good listener and it’s why Craig will work in radio again.”

Carton was arrested on the morning of September 6, 2017, by federal agents at his home in New York on criminal charges of securities fraud, wire fraud, and conspiracy to commit those offenses. They handcuffed him to a park bench, where he informed his wife, Kim, that he had been arrested.

“I’m going to tell you my story of how stupidity, bad decisions, and a secret addiction cost me everything, including the one thing I took for granted, my freedom,” says a regretful Carton in the documentary voiceover, punctuated by the metallic sound of a slamming prison door.

Co-directed and produced by Martin Dunn and Marie McGovern, the documentary opens with Carton at the height of his “Craigness,” as Dunn and McGovern put it, on September 4, 2007, the first WFAN show he did with Esiason.

Dunn and McGovern stressed that Carton realizes that this is it for him. If he messes up again, his radio career is over and he knows it.

"The character that you heard on the radio and the real Craig are not the same person. Craig is very soft-spoken and introverted off the air. He plays a character on the air." —Marc Rayfield

“I think Craig is a terrifically talented guy and I think everybody should have another chance; I wish him all of the best,” WIP veteran Glen Macnow said. “This is a country that really believes in second chances and redemption.”

Getting that second chance, however, requires not just contrition, but honesty and openness as well, and that's what Carton gives off throughout this documentary.

In addition to detailing the gambling addiction that led to his incarceration, much of which took place in Atlantic City, Carton also divulges a dark history that no one knew.

As an 11-year-old at a summer camp in 1980, Carton was sexually molested. Carton wanted it in his book “Loudmouth: Tales (and Fantasies) of Sports, Sex, and Salvation from Behind the Microphone.”

But the publisher, Simon & Schuster, omitted the chapter, because it was not a good fit with all of Carton’s hijinks.

Dunn and McGovern decided to keep it, and it's the most poignant part of the documentary.

With his lower lip quivering, Carton reads: “There he was in my bed, on top of me, doing things I knew were so hurtful to me to my core, things that would forever change me in the course of my life, things that should never be done to any human being.”

There is a recurring theme with Carton, which certainly can be traced back to his stay in Philadelphia. He was an ambitious, unfiltered, intuitive talent who had to blow up a few times before finally getting it.

It explains why he bounced around from Cleveland, Philadelphia, Miami, Denver and New Jersey, before eventually blowing up (in a good way) in New York.

“That’s not an uncommon path for a major radio personality,” Rayfield said. “Craig was and is tremendously talented. Personally, he’s a good friend. Professionally, he was a go-to guy in New York. He was a good teammate. The character that you heard on the radio and the real Craig are not the same person. Craig is very soft-spoken and introverted off the air. He plays a character on the air. He’s not pompous and bombastic away from the microphone.

“The public is forgiving and I suspect radio will be forgiving. Radio is not where it was three years ago when he left in 2017. But I think Craig will have a second coming. If I was at a radio station, I would hire him.

"Craig was quite a big figure in Philly. Craig’s time in prison gave him the time to make a serious reflection on his life, what he built up and what he pissed away." —Marie McGovern

“Craig’s going to get a job. Radio needs him as much he needs radio. He was a superstar. They need each other. I looked forward to putting on my radio in the morning with Boomer and Craig. They absolutely made me laugh. I think the country needs to laugh again.”

Whether it was here in Philadelphia, or nationally, Carton was a Larry Bowa, a Billy Martin. His volatile, facile ways were effective, before he would self-implode.

In March 1994 while at WIP, Carton was the first to report that Jeffrey Lurie had purchased the Eagles from Norman Braman.

In February 1997, Carton announced on WIP that Flyers’ star Eric Lindros had missed a key game against the Pittsburgh Penguins earlier that month because of a hangover. Late Flyers’ owner Ed Snider was livid. Snider, who once owned WIP before selling it to Infinity Broadcasting in 1994, threatened to sue WIP.

WIP was also the Flyers’ flagship radio station —compounding that.

Carton and Esiason have mended their differences, a schism, Carton stresses, that he’s fully responsible for creating.

“Craig was quite a big figure in Philly,” said McGovern, who was approached by Carton to tell his story. “Craig’s time in prison gave him the time to make a serious reflection on his life, what he built up and what he pissed away.

“Part of his on-air persona is the class clown, the adolescent boy who was always the one sitting in the back of his class with the wisecracks and quick retorts. That’s still alive and well, but you see that there’s been a transformation.”

After seeing “Wild Card: The Downfall of a Radio Loudmouth,” you want to like Craig Carton. You want to root for him. But the looming mountain before him is large.

Jody McDonald, another WIP veteran regular, recalls Carton as being a “good dude, a funny guy,” and they had some good times at WIP on Eagles’ road trips to Dallas.

“You can tell Craig was talented,” McDonald said. “I don’t know if I would have predicted the high heights he achieved, but I could see Craig having success.

“I wasn’t shocked that I heard Craig had issues with gambling, but I had no idea, with some of the money talked about, that he was in that deep. It’s really a shame what happened to Craig. I hope he does get another shot.

“I’m first and foremost a friend of Craig Carton’s. Secondly, I’m a huge fan of Craig Carton. Craig has paid his price. He deserves to go back on the air, because I think he’s very good at what he does.”

Carton was released from prison on June 23, 2020, but he’s been ordered to complete 150 hours of community service and pay $4.8 million in restitution.

“Colleen from New York. First time, long time,” is how Manhattan federal court Judge Colleen McMahon greeted Carton when he stood before her during his sentencing hearing on April 5, 2019. “Your marriage is over, your kids are terrified … reputation in tatters. Craig Carton, you have indeed descended into a hell of your own making.”

Can his comeback start in Philadelphia?

Correction: This story originally stated that Carton served 30 months of his 42-month sentence rather than just over 12 months.