'Hot spots' for the homeless will be canvassed on a daily basis, throughout the year. 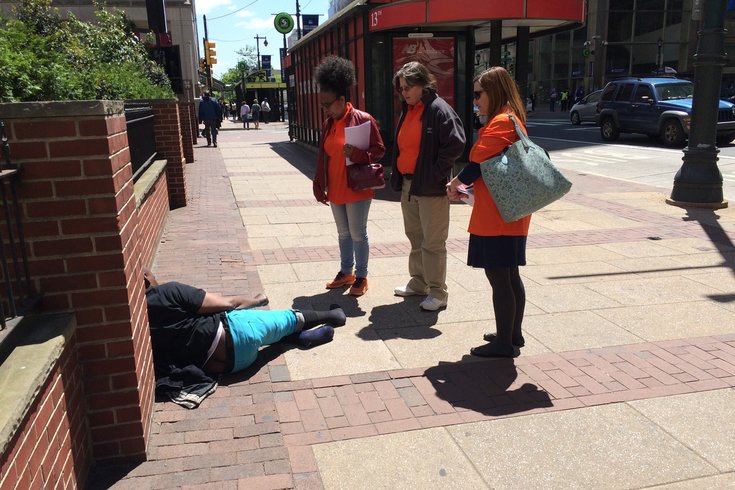 On Monday morning, a man named James stood at 12th and Market streets in front of the city's Hard Rock Cafe, quietly humming along with "Rapper's Delight" as it played through the restaurant's sound system.

James, dressed in a torn, stained polo shirt and dirty jeans, had been out here all morning when members of one of the city's new homeless outreach teams stopped to chat.

James told them he was living on the streets after his father had kicked him out. The outreach group went to work, and within minutes, the man learned that he was able to return home.

Maryann, an outreach worker and employee of Penn Medicine – who asked us not to share her last name citing her work with individuals with mental health issues – offered to call the man's father and see if they could help mediate the situation.

After calling the man's father, she found out that James was never kicked out.

His eyes lit up and a smile crossed his face.

"I'm going home right now," he said, as he hurriedly gathered his things. "Thank you. God bless you!"

That short interaction certainly doesn't fully illustrate the problem of homelessness in the city, but it is an example of how a little outreach at the right time can help get someone the help they need.

'NOT A QUICK FIX'

With the creation of the new outreach groups in the city's Office of Supportive Housing and the Department of Behavioral Health and Intellectual Disability Services, these types of interactions figure to be more common. 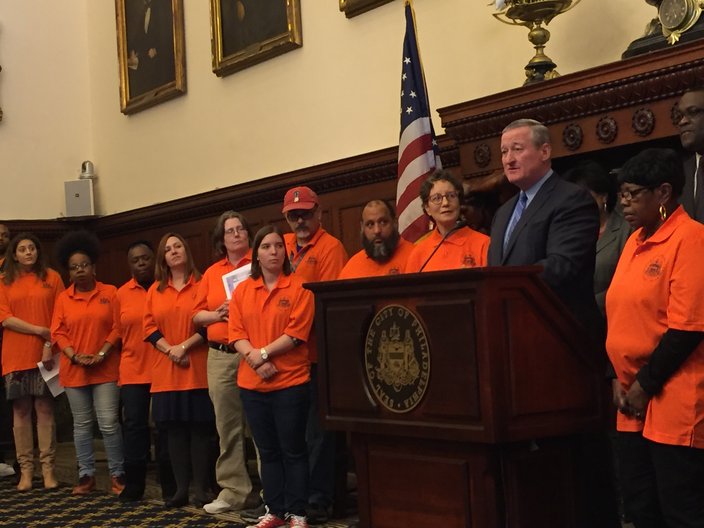 Mayor Jim Kenney announces a new program to combat homelessness in the city, while surrounded by members of the new outreach groups that will target hot spots for homelessness in Philadelphia.

Instead, the new outreach initiative will use existing state and federal funding, said Liz Hersh, the director of the Office of Supportive Housing.

In addition to patrolling hot spots, teams of outreach workers will meet with local business owners and be available to answer questions and provide information to commuters in the city.

"Homelessness outreach is not a quick fix," said Hersh, announcing the new outreach program. "It's a process of working with people who have experienced trauma and loss and working with them to get them the help and support services they need."

"I think this will help. It's all about getting to the right people at the right moment with the right services." – Helena, homeless outreach team member

Members of the outreach program will wear brightly colored orange shirts – emblazoned with the homeless hotline number – and be most visible during the morning and evening rush hours and during lunch time.

Harsh said the shirts will make the groups more visible, but the procedures used by the workers will not change from past outreach efforts, including one-on-one support and access to existing services for the individual.

The big change, however, is the program's focus on being proactive. In the past, outreach workers would only respond to calls about homeless. That will continue, but the new outreach program will put teams on the street to actively search for homeless individuals to engage.

"We haven't had that concentration in these hot spots," said Hersh. "And, we haven't had a high visibility, so, people know our outreach teams are out there."

Asked if the timing of the program meant it was an effort to get homeless people off the streets in preparation for the coming Democratic National Convention, Mayor Jim Kenney said it was not connected to the political convention here from July 25-28.

Instead, he said the program was in the works for some time.

Sam Vasquez, who was formerly homeless himself and spent 11 years on the streets of Philadelphia, has joined the outreach group in an effort to help others get off the streets.

He said that he was finally able to get housing through Project Home and he wants to help other people get the same opportunities he had.

TAKING IT TO THE STREETS

During the Monday lunch hour, outreach workers traveled down Market Street, headed east from City Hall, with plans to interact with any – and every – homeless individual they might encounter.

"If you're homeless in Philly, I've got to talk to you, even if it's just to say hi." said Helena, an employee of Penn Medicine, who also asked to keep her last name anonymous because of the sensitive mental health work she does. 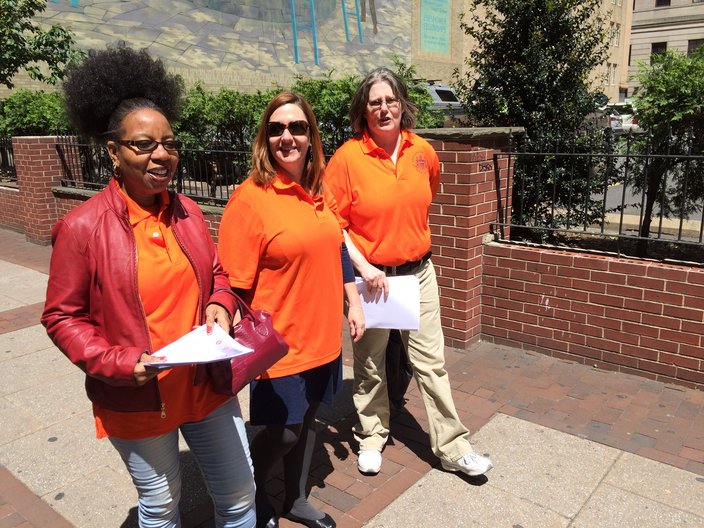 Maryann, Bridgette Tobler, coordinator of homeless outreach services for the city's Department of Behavioral Health and Intellectual Disability Services and Helena, hit the streets on Monday. Maryann and Helena asked not to share their last names due to the mental health work they do for Penn Medicine.

Helena, Maryann and Bridgette Tobler, coordinator of homeless outreach services for the city's Department of behavioral health and intellectual disability services, took to the streets to show how the new program will provide one-on-one support to individuals throughout the city.

Almost immediately, the women encountered a man sleeping near 13th and Market streets. This man, who did not speak to a reporter, told the women he was feeling dizzy and was awaiting a medical appointment.

He was known to the outreach workers – he has a home, they said – but they gave him a Wawa gift card with enough money on it to get something to eat.

"I think this will help," Helena said after walking on. "It's all about getting to the right people at the right moment with the right services."

Tobler makes sure the outreach teams always know how many of the 200-or-so beds at safe havens are open. Check-in points at six locations near the four hot spots so teams help teams keep a record of when any given area is canvassed.

Any concern that the new program will just push the homeless outside of the hot spot zones, the women said that won't happen.

Helena said that since the outreach effort isn't about apprehending any homeless people – Kenney said the city is "not going to criminalize people who we find living on our streets" – it's more about meeting the homeless and seeing if the city can help provide needed services.

"This isn't to push people," she said. "It's to meet them where they are at."

To help a homeless individual, you need to get to know them, let them get comfortable with you and then reach out and try to help get them off the streets, she said. If you're too pushy or insistent, said Helena, an outreach worker with 17 years of experience, you risk sounding like a "used car salesman" and a person could refuse your help.

But, if you don't try, the person might never get the help they need.

"We are all trying to throw a person a life preserver," she said. "We just don't know when a person will grab it."

If you see an individual on the street and would like to notify the city's homeless outreach group, call 215-232-1984.