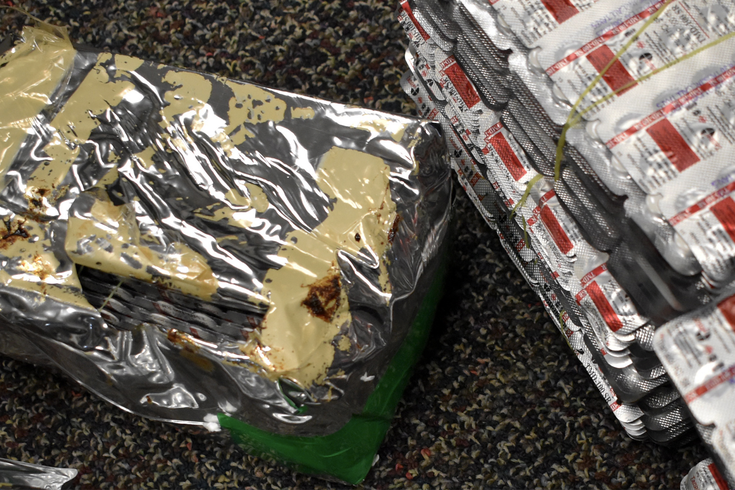 U.S. Customs & Border Protection officials in Philadelphia found 1,000 combined blister packs of the synthetic opioid Tramadol, a pain medication, hidden among cakes that were sent to the U.S. from London.

Federal customs officials have a had a busy couple of days in Philadelphia.

Tramadol is a synthetic, morphine-like opioid used to treat moderate to severe pain. It's a Schedule IV controlled substance known for its addictive drug profile if not taken as prescribed under the direction of a physician. The drug has a high risk for abuse, especially by people who live with chronic pain and health care professionals.

The parcel was inspected in Philadelphia and had a final destination at an address in Charleston, West Virginia. The shipment was labeled as "garments," and while it did contain some clothing, inspectors became suspicious after an X-ray appeared to show packaged pharmaceuticals.

When CBP officers opened the box, they found two packaged food containers that were labeled as sweets from India. Inside were two sticky cakes with aluminum foil pouches in the packaging. The pouches contained 1,000 combined blister packs of Tramadol 100 mg pills.

“Intercepting unprescribed pharmaceuticals being smuggled to the United States remains a serious public health concern and a Customs and Border Protection enforcement priority,” said Joseph Martella, CBP’s area port director in Philadelphia. “Consumers should be wary of any medicines that they purchase from an overseas vendor. The pills could be counterfeit pharmaceuticals manufactured with unknown and potentially dangerous ingredients that could pose very real and very serious health threats to consumers.”

Though the two drug seizures in Philadelphia were especially unusual for their packaging, CBP seizes tons of illicit drugs and controlled substances on a day-to-day basis. In the last fiscal year, CBP officers seized or disrupted an average of 4,732 pounds of dangerous drugs every day in the United States.