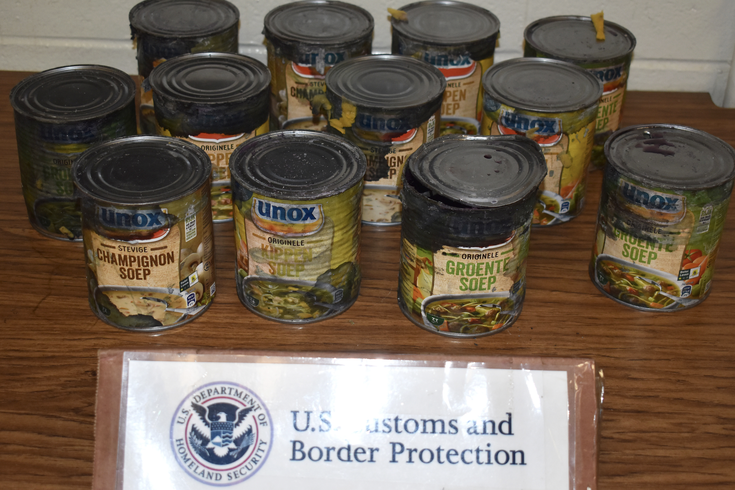 U.S. Customs & Border Protection officers in Philadelphia found 12 suspicious cans of soup in an international shipment. The liquid leaking from the cans turned out to be the party drug ecstasy.

Large soup cans filled with MDMA from the Netherlands were seized Wednesday in Philadelphia before reaching a final shipment destination in Miami, prompting U.S. Customs & Border Protection officials to reference the infamous Soup Nazi from Seinfeld.

The twelve liter-sized cans labeled “Dutch Canned Vegetable Chicken Soup" were inspected by CBP officers in Philadelphia who noticed that they were leaking a purple liquid, authorities said. The cans weighed a little over 24 pounds.

An analysis of the contents of the cans revealed that they were filled with liquid MDMA, the party drug also known as ecstasy and molly. The drug is sometimes mixed with methamphetamine or ketamine and can lead to accidental overdoses.

"No soup for you!" CBP officials said Thursday as they announced their finding.

The joke is among the most iconic from Jerry Seinfeld's nineties sitcom, which is experiencing a bit of a cultural renaissance since debuting on Netflix last fall. The so-called "Soup Nazi," played by actor Larry Thomas, runs a terrifying takeout business in New York and demands that his customers follow rigid steps to get an order of soup. If the rules aren't followed, a staff member snatches the brown bag of soup and the chef doles out an arbitrary punishment, including a temporary or permanent ban.

Some of the main "Seinfeld" characters, terminally inept at avoiding conflict, run afoul of the Soup Nazi throughout the episode. With an unwitting assist from Kramer, the only guy the Soup Nazi likes, Elaine gets ahold of the recipes and threatens to run the entire business to the ground.

Based on that single role in "Seinfeld," Larry Thomas reportedly earns six figures making videos for fans who find him using the celebrity-for-hire app Cameo.

A CBP spokesperson said Thursday that the intended recipient of the MDMA shipment has not been publicly identified. Any future charges likely will stem from CBP's sister agency, Homeland Security Investigations.

During the last fiscal year, CBP seized or disrupted an average of 4,732 pounds of drugs every day in the United States.

“Crooked consumers continue to purchase dangerous drugs and controlled substances from unscrupulous international vendors, chemicals that consist of unverified ingredients that could potentially harm or kill our nation’s citizens," said Joseph Martella, CBP’s area port director in Philadelphia. "Customs and Border Protection officers remain steadfast in our commitment to searching through the proverbial haystack to intercept the needle of illicit shipments."

There's a Darwin Award out there somewhere for the genius who decided that poorly sealed soup cans were a workable method of shipping liquid MDMA across the world.