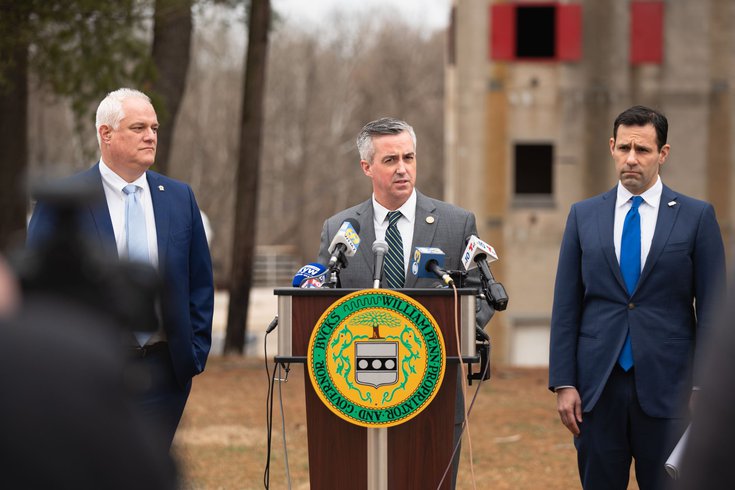 Bucks County is accusing companies of knowingly manufacturing and selling products containing dangerous chemicals that have polluted local water and soil for decades.

The Bucks County Commissioners and District Attorney's Office filed a joint lawsuit Tuesday against a group of corporations that manufacture and sell products containing hazardous chemicals called perfluoroalkyl and polyfluoroalkyl substances, or PFAS.

Among the PFAS manufacturers named in the lawsuit include 3M, DuPont and Tyco.

County officials accused the manufacturers of making and selling firefighting foams containing PFAS that were released into the environment and contaminated water, soil and other natural resources.

"While we will continue to investigate and study the health effects of these harmful chemicals, the time to hold these companies accountable is now," Bucks County Commissioner Bob Harvie said. "They knew that their firefighting foam products contained these toxic substances when they peddled them, and that they were dangerous even when used properly."

Among the accusations that the companies are facing include negligence and civil conspiracy. County officials are also seeking civil fines, penalties and restoration under Pennsylvania's Unfair Trade Practices and Consumer Protection Law. Any compensation received through litigation will go towards remediating places that have been impacted by PFAS, according to the county.

"This lawsuit is about more than the county’s substantial rights as a property owner," Bucks County Solicitor Joe Khan said. "This is about enforcing the people’s constitutional right to pure water. These corporations need to pay for their outrageous misconduct and this lawsuit will help make sure that they do."

Bucks County District Attorney Matt Weintraub described the alleged acts by PFAS manufacturers as "deceptive and unfair" for not disclosing such information to the public.

"These companies interfered with our rights to public health, safety and peace and the right to pure water and to the preservation of the natural environment," Weintraub said.

PFAS are man-made chemicals that do not break down when exposed to air, heat, water and oil, according to the Pennsylvania Department of Environmental Protection. PFAS can spread easily and infect water and soil, and they are oftentimes referred to as "forever chemicals" because they don't biodegrade.

Along with firefighting foams, PFAS are used to make cookware, carpets, clothing, furniture fabrics, food packaging and other materials that are resistant to water, grease and stains.

People are most-commonly exposed to PFAS when eating fish caught in contaminated waters and foods packaged in certain materials. Exposure also can occur when handling products made with the chemicals or unintentionally ingesting polluted soil and dust.

Exposure to PFAS has been associated with adverse health conditions including high cholesterol, an increased risk of cancer and obesity, according to the U.S. Environmental Protection Agency. It can also cause decreased fertility and high blood pressure in pregnant women.

Scientists classify PFAS as emerging contaminants because the risks they pose are still being understood.

Last October, the Pennsylvania Department of Environmental Protection issued a "Do Not Eat" advisory for fish caught in the Neshaminy Creek basin in Bucks and Montgomery counties due to extremely high levels of PFAS detected in fish tissue samples.

State officials have identified nearby military installation superfund sites as contamination sources. PFAS previously has been discovered at high levels in water near the former Naval Air Warfare Center in Warminster, Bucks County and the Naval Air Station in Willow Grove, Montgomery County.