With a state directive to move to paper record voting systems, time is of the essence to get everything in order

Voting machines at a polling location in the dining room of The Gold Standard Cafe on Baltimore Ave. in West Philadelphia on Tuesday, May 15, 2018.

In 117 weeks, Philadelphians of all political stripes will head to their respective polling places to cast a vote in the presidential election. It’s kind of a big deal as far as American history will be concerned.

With energized partisans as far as the ear can hear, it’s not exactly a reach to think voter turnout could reach, or surpass, the 68-percent threshold met in 2008 (though the 90 percent mark in 1960 is probably asking too much).

Heavy turnout elections bring long lines at polls, with voters in many places being forced to wait even a couple of hours outside before casting their ballot. This is just a fact of American-voting life in hotly contested races.

Nerves will be frayed. Patience will be tested. Words will, more likely than not, be exchanged. Discouraged voters will head home before exercising their franchise.

That’s why local officials find themselves approaching crunch time to honor the state’s April directive that requires “Pennsylvania’s counties to have voter-verifiable paper record voting systems selected (for purchase) no later than December 31, 2019 and preferably in place by the November 2019 general election.”

When that news broke earlier this year, a few news stories intimated that Philly getting those machines in place for 2020 was pretty much an impossibility. Those stories should have featured “well, maybe not impossible” caveats.

Shortly thereafter, the City Commissioner’s Office – upon hearing directly from Gov. Tom Wolf’s staff – reconfigured its timetable in an effort to ensure the new voting system would be in place by the mayoral/council general elections in 2019.

The city is on a tight budget and a tighter timetable to make that happen, but the race is on.

The new systems – providing a paper record of each vote is not only the primary requirement, but the driving force behind the mandate – represent the commonwealth’s push to provide machines secure against the threat of hacking.

At the time, Acting Secretary of State Robert Torres said, “We want to bring about the system upgrades so Pennsylvania voters are voting on the most secure and auditable equipment as promptly and feasibly as possible.”

Sure, a panel convened by the Trump administration apparently “found no evidence of widespread voter fraud” despite fears to the contrary, but fair elections are a noble standard designed to protect citizens’ confidence in the overall system.

Lisa Deeley – chairwoman of the City Commissioner’s Office – and deputy commissioner Nick Custodio made clear they’re well aware of that dynamic as they recently provided a closer look at how the conversion to an electronic system is going.

Still confident that the systems would be in place next year, Deeley and Custodio say they're quickly running out of time to purchase machines, find a place to keep them (along with the old machines, which would be kept as backups for at least one election), train poll workers on the new systems, and get word out to the general public about how things will be different at the polls.

Making matters worse at this point, ironically, is the fact that there is only one state-certified, electronic voting system, the OpenElect Voting System manufactured by Unisyn Voting Solutions of California, leading to fears that that limited selection might not work well in the commonwealth’s largest municipality.

The Unisyn machines, which could be coming to Philadelphia in lieu of better options, feature touch-screen technology to scan and validate ballots, provide ballots to accommodate voters with special needs, and tabulate results. (It's already in use in 10 states.)

“There are two separate issues: Voting machines and election systems,” Deeley said. “You can’t hack those machines but the machines are old, and we do need new ones. It’s a conundrum with a swirl of fear.”

“It’s like a new house that you have to buy, and have to pay top dollar, but you can only choose that one house." – Lisa Deeley

For his part, Christopher Deluzio, a University of Pittsburgh cyber law and policy fellow who provides support to the Blue Ribbon Commission on Pennsylvania’s Election Security, said it’s not exactly that cut-and-dried.

Though Philadelphia’s voting machines aren’t connected to the internet or a collective network, direct recording electronic machines without paper records cannot be audited and are exposed to malware infiltration.

“It’s not as safe as a paper ballot run through an optical scanner, which is the gold standard for what we do for security,” he said, noting that the machines were compromised by benevolent hackers testing those systems.

Acknowledging that people “want a receipt that says I voted,” Deeley estimated the cost at between $30 million and $50 million for 4,000 new machines. (Considering each of the city’s 1,688 divisions has at least two, along with the need for backups, that number is expected climb higher.)

“It’s not like we have $50 million laying around. Schools, infrastructure, pension fund – they all take precedence,” she said. “With just one (state-certified) machine to choose from, it would be irresponsible to make a legacy purchase right now. It’s haphazard, unthoughtful. We don’t want to pay top dollar only to be told three months later that the system is obsolete.

“It’s like a new house that you have to buy, and have to pay top dollar, but you can only choose that one house," she added. "There’s nothing else to choose from. We have to find a system that’s right for Philadelphia. It changes the whole voting experience.”

Change things, it certainly will.

From an operational level, the mechanical machines currently in use are simple devices, but nearing the end of their lifespan. They're not connected to anything except a power outlet on a nearby wall.

When votes are cast on them, they are kept in the machine itself and recorded on a cartridge which is removed, taken to one of seven Board of Elections centers, loaded into a reader and uploaded.

The new machines would change that dramatically. Voters would sign in (possibly on an electronic pollbook) and receive a paper ballot to feed into another machine. They would make selections on a touch screen, print it out and place that ballot into an "optical scanner." Instead of cartridges, totals would make their way to the Board of Elections via thumb drives from a WiFi-accessible machines.

When I asked Wanda Murren of the Department of State about the city's conundrum, she noted that the state expects to certify within weeks another electronic voting system for consideration by Philadelphia.

Certification of a third system is “in the process” and could be granted by late fall or early winter, with two others expected to follow next year. (You can keep track of them all via this page on the Department of State's website.)

That comes as somewhat of a relief from those in charge of overseeing elections in the city but the proverbial heat is still on.

The electronic voting upgrade is the primary focus for Deeley, who was elected in 2016 and took over as chairwoman last December.

“We had started down the whole path before the governor’s directive. As soon as I got into office, it was all about hacking and verifiable voting,” she told PhillyVoice in her office recently. “Voters didn’t elect me to get re-elected. They elected me to ensure we have fair elections in Philadelphia.

“I can’t proceed haphazardly with one system to choose from. It would be irresponsible. But, we’re continuing on our path.”

As an important aside, both Deeley and Custodio couldn’t say enough about the benefits that electronic pollbooks would have in “reforming elections” here. The pollbooks would replace the paper books signed by registered voters at a poll with an electronic database.

“That’s what we should be talking about,” Deeley said of a system that speeds up election-day check-ins at polls, and makes same-day voter registration and “no excuse absentee ballots” possible, as well as late voter registration.

“In an ideal world, we would implement them before new polling machines,” Deeley said. “If we’re really talking about reforming elections in Philadelphia, electronic pollbooks are the way to go. There’s no point in not getting electronic pollbooks if you get new machines.”

“It would be like getting a Maserati with an automatic transmission,” Custodio offered as an analogy. 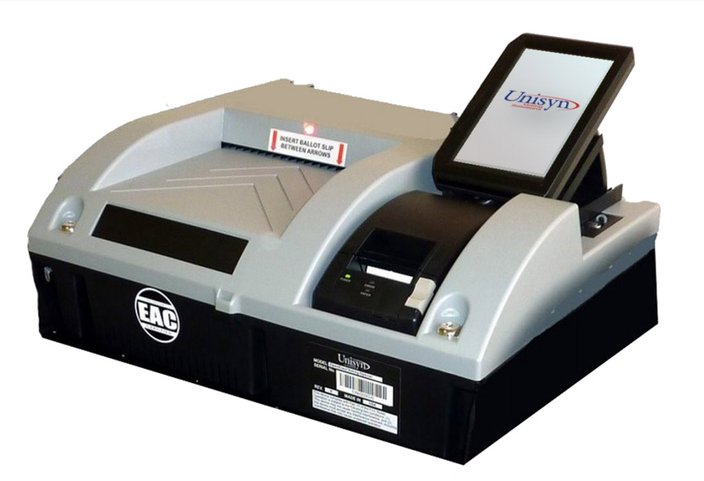 The Unisyn Open Elect voting system is currently the only one certified by the state of Pennsylvania.

Deeley and Custodio have traveled to other cities to learn about their elections process and voting equipment, and attended technology expos to assess other voting systems that might earn state certification.

They also know there’s a little grant money coming in from the feds, via the state, to help cover the cost of a program that involves the city’s procurement and law departments, as well as city council and the mayor's office.

“We’re still in the kitchen-table brainstorming stage,” Deeley said. “But it’s all out of our control right now. It has to start happening quick, though. We’ll have nine, 10 months of work that we’ll need to get done within two.”

Murren said state officials are well aware of the time demands, which is why they’ve come up with a “workable timeline” that gives an outline of steps to get systems in place by various points in the next two years.

“Voters really want to have a paper record of their vote,” she said. “It’s become increasingly important. Voter confidence is one of most important things we can support. We need to be sure upholding the integrity of elections and allowing every voter to see a paper record will go a long way.”

In order to have the machines in use for the November 2019 election, Deeley and company will  have to start making presentations to Mayor Jim Kenney and council members in September.

Public forums across the city will follow to serve as a “listening tour” with residents having the opportunity to tell the commissioners what they want from a new electronic voting system.

From there, the city commissioners would to obtain some new machines in the spring of 2019 so they can start training staff and Election Day poll workers through November..

“We have to roll it out in 2019,” said Deeley. “We can’t wait until 2020 with the turnout expected. Could you imagine? We are fully prepared for 2020 but so many things remain out of our control. Money and something to choose from: That’s what we need.”

Ready for the twist? Some election-savvy experts note that the newer machines may be more vulnerable to hacking since they're conceivably accessible for outsiders in ways the current machines aren't.

The saving grace? The paper ballots would make a manual recount possible, which is an upgrade from the current system which lacks a paper record of how each vote was cast.