Philadelphia Zoo gorilla prefers to walk around like a human 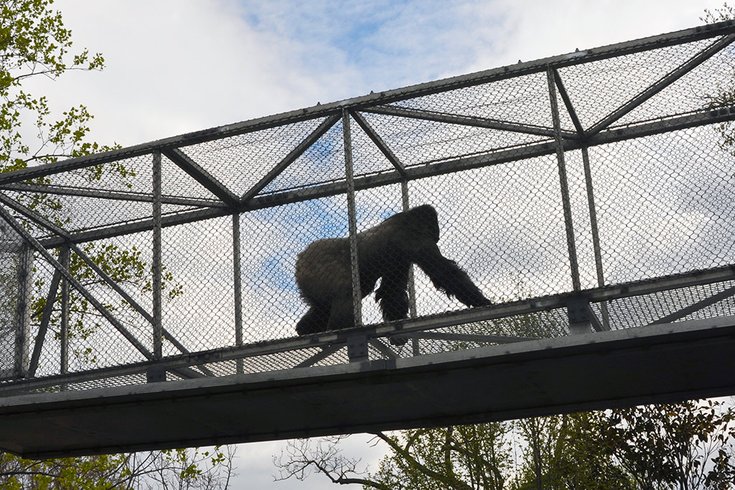 Motuba, another gorilla at the Philadelphia Zoo, is seen walking in the typical way – leaning forward on the knuckles – as he walks on an elevated trail.

Louis, 18, a male gorilla who has been at the zoo since July 2004, is keeping his hands clean by choosing to walk around on two legs, according to an Associated Press report:

MORE NEWS: Progressive Philly D.A. aims to assist the addicted, not arrest them

When Louis has his hands full of tomatoes or other snacks, he walks upright like a human to keep food and hands clean, rather than the typical gorilla stance of leaning forward on his knuckles.

Michael Stern, curator of primates and small mammals, says workers had to install a fire hose over a mud puddle in the yard. The nearly 500-pound, 6-foot-tall primate crosses it like a tight rope to avoid getting dirty. He says it's "pretty unusual" for gorillas to walk around upright. In the wild, Western lowland gorillas like Louis might do it for a few seconds to reach food or wade into swamps.

Louis, who is one of two bachelor gorillas at the zoo, was born in May 1999 at the St. Louis Zoo. He can be seen walking around on his feet in this video tweeted by the Philadelphia Zoo:

Although gorillas occasionally walk on two legs (bipedal), it is less common. Not for Louis though - he can often be seen walking bipedal when his hands are full of snack or when the ground is muddy (so he doesn't get his hands dirty)! pic.twitter.com/6xrMQ1MU9S