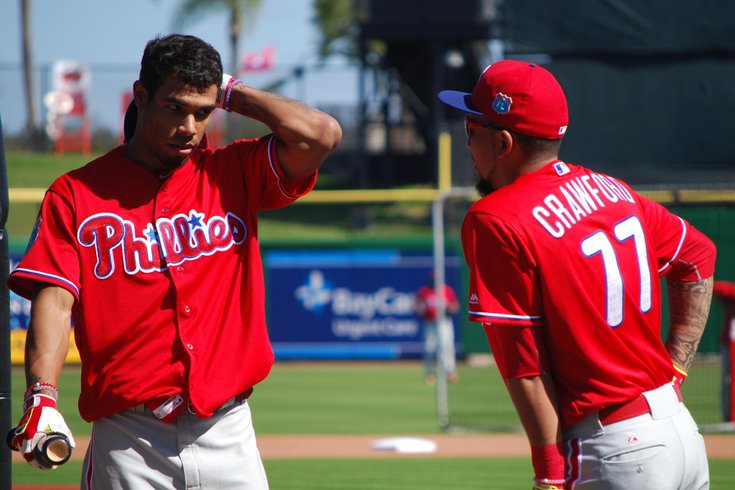 Remember all of the jokes people made in the last few years about the Phillies being too old?

Even after watching the final two members of the 2008 World Series team leave Philadelphia in the last four months (Carlos Ruiz and Ryan Howard), with a couple of other 30-somethings added to the mix in the last two weeks (reliever Pat Neshek and infielder/outfielder Howie Kendrick), the Phillies roster will easily be one of the youngest in baseball in 2017.

The Phils managed to get younger on Friday, the deadline for teams to set their 40-man rosters ahead of next month’s Rule 5 Draft. Any players placed on the 40-man rosters Friday are ineligible for the draft, held on the final day of the Winter Meetings next month.

The Phillies added a whopping 11 prospects to their 40-man roster on Friday. The average age of those players: 22.7 years old.

But that’s only the start. The average age of the 40 players on the entire roster: 25.05 years old.

It’s Neshek, Kendrick, and 38 players under age 30. Twenty-six of the 40 players on the roster are 25-years-old or younger.

“There’s no secret in the last couple of years this organization started to head in a new direction and these roster moves showed the continued commitment to not only building a winner in Philadelphia but to building it the right way,” general manager Matt Klentak said in a conference call on Friday. “With adding this many young players and with the average age of the roster being what it is, I think there’s a reasonable expectation that many of these young players are going to spend time in the big leagues this year.”

In order to fit those 11 players onto the 40-man roster, the Phillies, entering the day with 32 players on their 40 man roster, had to make a few additional transactions.

Elvis Araujo has left the … 40-man roster. Just before the Phillies made their updated 40-man roster official, they announced that the left-handed reliever had been claimed off waivers by the Miami Marlins.

Two other players were designated for assignment: right-handed starter David Buchanan, who had a 5.01 ERA in 35 starts with the Phillies in 2014 and 2015 but never earned a promotion to the big league club in 2016, and right-handed reliever Jimmy Cordero, an attractive back-end bullpen prospect armed with a triple-digit fastball but battled arm issues throughout the season, appearing in just 22 games in 2016.

Like Tirado, Cordero was acquired in July of 2016 from Toronto in the Ben Revere trade.

“Obviously a year ago at this time we were pretty high on Jimmy,” Klentak said. “So much so that we added him to the roster. And his year was not as productive as we had hoped or as he had hoped. It becomes a numbers game. That might sound cliche but truly that’s the reality. We like him a lot. We’d love to keep him in the organization if possible, but, in order to add the players that we felt we needed to add today, we had to make a couple of tough roster decisions.”

The Phillies would also like to keep the likes of outfielders Carlos Tocci, Jose Pujols, and Andrew Pullin, infielder Malquin Canelo, and pitchers Hoby Milner and Miguel Nunez, but all six will be among the prospects who are eligible to be selected in next month’s Rule 5 Draft. Per Rule 5 rules, players who were 18 or younger on June 5 preceding the signing of their first contract must be protected after four minor league seasons, and players 19 and older must be protected after three seasons.

The Phillies, who were recently rated as having the game’s top farm system in 2016, is almost sure to lose at least one prospect in the Rule 5 Draft. But that doesn’t necessarily mean that prospect is gone for good: per Rule 5 stipulations, any player selected must remain on that team’s active 25-man roster for the duration of the big league season.

The Phillies have been able to pull that off in each of the last two seasons with Odubel Herrera and Tyler Goeddel. Will another team pluck a prospect like Tocci away and hold onto him for all of 2017?

The Phillies, of course, understand all of this with not just Tocci, but all of their prospects. Part of assembling a 40-man roster ahead of the Rule 5 Draft is also figuring out who could be most (and least) likely to stick with another team.

“We know we can't protect everybody and we did our best to protect as many as we could,” Klentak said. “Eleven is a lot. But we're prepared for the possibility that we might. There are two ways to look at that. One, it's disappointing we might lose players and on the flip side, organizationally, it's an encouraging sign and it shows that our system is continuing to produce good players.”

The Phillies current 40-man roster is at exactly 40. But Klentak said that won’t prevent the team from continuing to look to add pieces through free agency or trades this winter.

The front office would just have to clear more space, as they did Friday. And with a quick glance at the current, updated 40-man roster, there would seem to be some fairly obvious casualties (particularly among pitchers).

So if the Phillies, say, wanted to add a veteran backup catcher (and not push Knapp into a back-up role), they could sign a free agent and designate someone on the current 40-man for assignment.

“We have the ability to make additions to our roster wherever we choose,” Klentak said. “It’ll just have to come with a corresponding move to it, and that can be the challenge. But we have the ability to add, whether it’s a catcher, an infielder, another outfielder, or somebody in the bullpen or even another starter. We have the ability to do all of those things if we choose to, we just need to be comfortable with the fact that it comes with an additional cost.”

Here, again, are the 11 players Klentak added to the Phillies 40-man roster Friday:

• Dylan Cozens, the 23-year-old outfielder who hit a Double-Reading record 40 home runs in 2016, the most home runs for any minor league player at any level last summer.

• Nick Williams, the 22-year-old outfielder acquired in the Cole Hamels trade, who is the odds-on favorite to be the first position player prospect called into regular major league duty in 2017.

• Andrew Knapp, the switch-hitting 25-year-old catcher who could find himself in line for the backup job in Philadelphia, with fellow prospect Jorge Alfaro (23) in need of more seasoning.

• Jesmuel Valentin, a 22-year-old switch-hitting second baseman and former first-round pick the Phillies acquired from the Dodgers in the Roberto Hernandez trade.

• Mark Appel, a 25-year-old, former No.1 overall pick who came over from Houston in the Ken Giles trade. Appel, a right-hander, had right elbow surgery early last summer.

• Ben Lively, a 24-year-old right-hander who won the Paul Owens Award as the organization’s top minor league pitcher in 2016. He came over from Cincinnati in the Marlon Byrd trade.

What a day to remember! Added to the roster and take this guy down within 10 min of being in the woods! pic.twitter.com/oSlcaZUTKj

• Elniery Garcia, a 21-year-old left-hander who allowed two runs or fewer in 14 of 19 starts at Class A Clearwater before being promoted to pitch for Double-A Reading in the Eastern League playoffs.

• Ricardo Pinto, a 22-year-old right-hander who claimed the Paul Owens Award in 2015 and represented the Phillies as a member of the World Team at the 2016 Futures Game.

• Nick Pivetta, a 23-year-old right-hander who made the Eastern League All-Star team and had a 3.27 ERA between Double-A Reading and Triple-A Lehigh Valley. Acquired in the Jonathan Papelbon trade.

• Alberto Tirado, a 21-year-old right-hander who transitioned into a starting role last summer and had an organizational-best 14.2 strikeouts per nine innings. Acquired in the Revere trade.