It's the first time since 2007 they've lost their first three games. 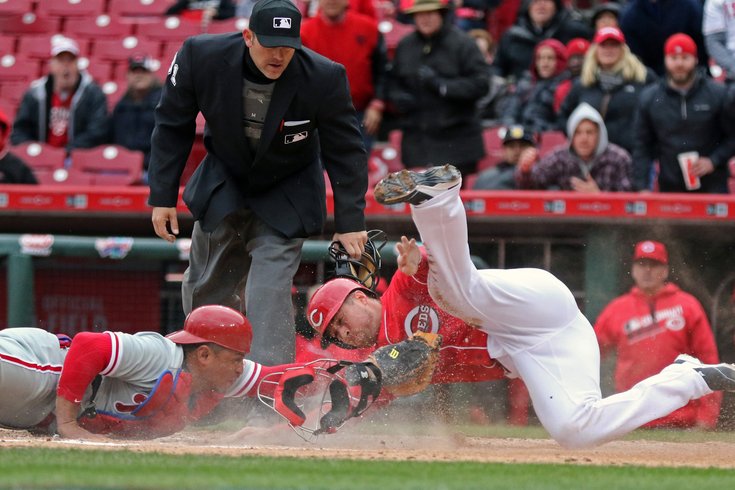 Cincinnati Reds' Tucker Barnhart scores on a double by Scott Schebler as Philadelphia Phillies catcher Carlos Ruiz can't get the tag down in time.

CINCINNATI – Three days after hosting the largest regular season crowd in the 14-year history of Great American Ball Park, the Cincinnati Reds and Phillies played to what the naked eye told you was a sea of 35,000 empty red seats on Thursday.

An early start (12:35 p.m.) on a school day wasn’t ideal. Neither was the first-pitch temperature of 43 degrees, which didn’t factor in the wind chill coming off the Ohio River.

No matter the game time or the weather forecast, it was an atmosphere the Phillies should probably get used to this season. It’s been that difficult to watch.

After the bullpen blew the first two games of the season-opening series (and the offense struggled, too), Thursday’s matinee provided enough material for power point presentation on how the 2016 Phillies could lose more games than the 99-loss team that preceded them.

The starting pitching is improved with an infusion of youth, but it’s not exactly the 2011 rotation of aces, either. The lineup has what appears to be a middle-of-the-lineup fixture for the next decade in Maikel Franco (as long as he’s healthy), but almost nothing else to get excited about. And, yes, the bullpen.

On Thursday afternoon, Charlie Morton was cruising until he wasn’t, and it turned ugly, and the bullpen failed to bail him out, and the offensive production was once again limited to almost nothing except the long ball (from a team that’s not expected to hit many home runs).

Morton and Rule 5 reliever Daniel Stumpf were charged with eight runs on six hits and four walks in a disastrous fourth inning as the Phillies dropped a 10-6 defeat to the Reds.

“Obviously, you try to take the positives and move forward,” Morton said the Phillies coming off an encouraging spring only to drop each of their first three games of the regular season. “But you try not to let the momentum of negative things (affect you), you try not to carry those things with you. It was nice to play well in spring, but we've got to come in and win ballgames. And I didn't do my part.”

The final score made the game look a lot closer than it was - a pair of two-run home runs from the holdovers of the glory years, Ryan Howard and Carlos Ruiz, helped cut into a Reds lead that was 9-2 after four innings.

The winless Phillies will take their season-opening road trip to Citi Field on Friday for the first of three games before Monday’s home opener.

Maybe they’ll win a game in Flushing, where the defending National League champs have both Jacob deGrom and Matt Harvey scheduled to pitch. Maybe they won’t.

Despite sitting pretty the first two games, the Phils couldn’t win one in Cincinnati against a Reds team that;’s also expected to flirt with a chance to secure the No.1 overall pick in the 2017 draft. The Phillies were anything but pretty Thursday.

In failing to win a single game in Cincy, it marked the first time the Phillies had been swept in a three-game to start a season in nine years. The last time came in 2007 at Citizens Bank Park against the Atlanta Braves.

The 2007 Phillies would end up in the postseason as division champs. But there are no Jimmy Rollins or Cole Hamels walking through the 2016 door.

“I’m not discouraged by it, (but) I’m not happy with it,” Mackanin said of the Phillies winless start. “We’re not swinging the bats like we did in the spring. I don’t want to take anything away from their pitchers, but we’re not facing (Zach) Greinke and (Clayton) Kershaw. I would like to have seen a little bit more offense. We got some late today, which was good to see some of the guys getting some hits, but we need to do a better job of hitting the ball.”

Aside from Franco, who reached base four times, the Phillies best at-bats came from the only two players who were around when the team was a contender and the two that are being bumped out of regular playing time this year.

Howard, back in the lineup after sitting Wednesday’s game on the bench as a part of Pete Mackanin’s first base platoon, went 2-for-4 with a 418-foot home run with two outs in the fifth inning. It was his first home run of the season and the 358th of his career.

Ruiz, whom Mackanin said will continue to serve as the backup catcher to Cameron Rupp earlier this week, was also in the starting lineup for the second time in three games. Ruiz was 2-for-3 with a walk, a double, and a mammoth two-run home run that found a landing spot in the second deck of empty red seats beyond the left field fence at GABP.

But neither Howard or Ruiz are expected to be on the roster in a year.

Odubel Herrera, who could very well be the team’s starting center fielder again in 2017, went 0-for-5 with three strikeouts. He is 1-for-11 to begin the season. Fellow outfielder Peter Bourjos also has one hit through three starts.

And Charlie Morton had more earned runs (6) than innings pitches (5).

But at least you can’t blame this one entirely on the bullpen. Well, you can if you put some of Thursday’s loss on Stumpf, who didn’t retire a batter but did serve up a grand slam in his major league debut.

“We have to see what we’ve got in Stumpf and then (Brett) Oberholtzer,” Mackanin said of the two bullpen pieces who had yet to make their 2016 debuts before Thursday. “One good thing out of this was we got those guys in the game to see what they were capable of doing. And Stumpf … he just couldn’t put hitters away or command his fastball. I liked his breaking balls, but it was his major-league debut. We’ve got to see what we’ve got.”

There are 159 games on the schedule to see the 2016 Phillies. Tickets remain available for the home opener on Monday.

They could be still available on Monday, too, after the Phillies meet the Mets this weekend.