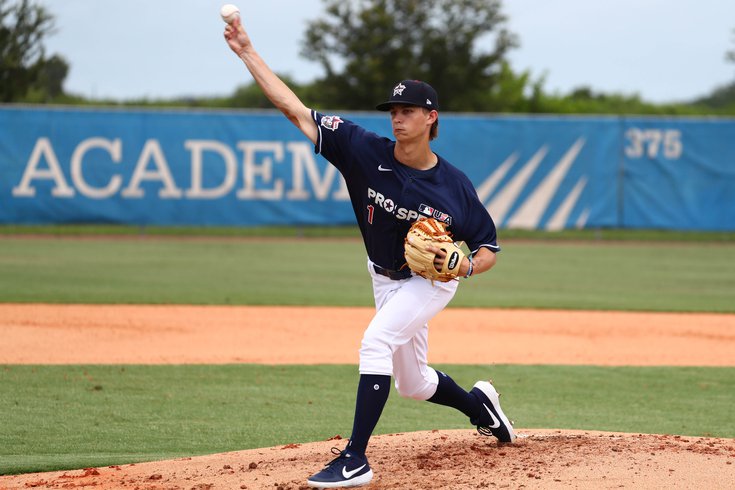 Mick Abel hopes he can be the future ace the Phillies desperately need.

There was live baseball going on Wednesday night. Well, kind of.

Amid a pandemic and contentious financial disputes each keeping Major League Baseball from getting its 2020 season underway, the Phillies drafted right handed pitcher Mick Abel with the 15th-overall pick in this year's draft.

Abel, an Oregon State commit who is from the same state, throws up to 96 mph and was a somewhat surprising high school selection for a team that has avoided that spot for quite a few years.

At 6-foot-5 and 198 pounds, he is huge. And at just 18 years old, he can still get a lot bigger. Here is a scouting report on the newest member of the organization:

Abel has the type of arm that you can only find in the top half of the first round if you’re looking for a pitcher. Scouts graded his fastball highest with a superior score (60) as the pitch typically comes in between 93-95 MPH. According to Perfect Game, Abel has a FB Velocity of 97 placing him in the 99.94th percentile for his class.

Something that speaks volumes about Abel across the board is his maturity at the age of 18. His pitch arsenal shows a lot of versatility and potential for growth as somebody who already throws four pitches. Arguably his most impressive asset might be his slider that was graded top of the line by scouts (55). Throwing it between 82-86 MPH, the sky is the limit for this strikeout pitch.

The repertoire mixes in a quality changeup (55) and a decent curveball (50) which has the early makeup for a devastating pitch arsenal once polished. The Oregon State commit was already voted by scouts as having the best breaking pitch in his high school class thanks to the slider. [LastWordOnBaseball]

His slider is his out pitch and he has a plus changeup to go along with his fireball fastball. He won't be a quick turnover kind of prospect like recent first rounders who were taken from the college ranks.

We would love to keep going but frankly, it just gets worse and we don't want to waste any more of your time.  Looking all the way back to Cole Hamels' selection as the Phils first rounder in 2002, it has been an embarrassment of riches as just three (the three listed above) have made any kind of impact on the MLB club.

Bohm was expected to make his major league debut in 2020 and he still may, as he has been touted as the top third base prospect in all of baseball. Philly hopes they can build on what they hope was a great pick two years ago with another successful player in Abel.

The righty has no one blocking him in the starting rotation, should he be a fast riser through the minor league ranks. It's also interesting and worth noting that Philly decided not to take a chance on Central Bucks East flamethrower, 17-year-old Nick Bitsko who was still on the board at 15 when the Phillies made their choice.

Wednesday's first round was the kickoff to a weird draft for a number of reasons, as not only is there no season currently underway but there are just five rounds. Scouting was also extremely limited, with no (or little) 2020 season to refer to for organizations weighing decisions.