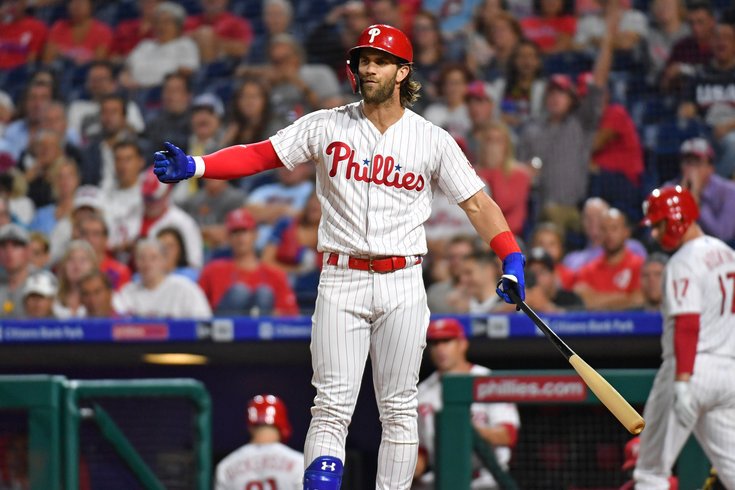 Philadelphia Phillies right fielder Bryce Harper stood behind remarks by Tampa Bay Rays pitcher Blake Snell, who said he did not want to play this year if the MLB's proposed revenue split gets approved.

Snell sparked a contentious debate on Wednesday while responding to questions from fans on his Twitch channel. He said MLB's revised proposal for a coronavirus-shortened season — with steeper pay cuts for players — is a raw deal.

"Y'all gotta understand, man, for me to go – for me to take a pay cut is not happening, because the risk is through the roof," Snell said. "It's a shorter season, less pay. No, I gotta get my money. I'm not playing unless I get mine, OK? And that's just the way it is for me. Like, I'm sorry you guys think differently, but the risk is way the hell higher and the amount of money I'm making is way lower. Why would I think about doing that?"

Harper, who signed a lucrative 13-year, $330 million contract with the Phillies last spring, seemed to agree with Snell in remarks he made Thursday on his own Twitch channel.

"He ain't lying. He's speaking the truth, bro," Harper said. "I ain't mad at him. Somebody's gotta say it, at least he manned up and said it. Good for him. I love Snell, the guy's a beast. One of the best lefties in the game."

Snell suggested that the risk of playing for reduced pay is compounded by the fact that players will have to follow strict rules to mitigate the spread of COVID-19.

"I'm just saying, it doesn't make sense for me to lose all of that money and then go play," Snell added. "And then be on lockdown, not around my family, not around the people I love, and getting paid way the hell less — and then the risk of injury runs every time I step on the field."

A plan approved Monday by MLB owners includes a 50-50 revenue split with players for an 82-game season, 30-man rosters, universal DH and an expanded 14-team postseason. An earlier agreement between owners and players in March would have guaranteed the players the full prorated amount of their salaries based on the number of games played, plus 4% of their 2020 salaries through the end of May.

The owners have since called for a revenue split similar to what is done in the NFL, NBA and NHL, which all have salary caps.

MLPBA executive director Tony Clark said last month that the players union was "done negotiating" further pay cuts beyond the agreement to prorate salaries. He responded to MLB's proposal further on Monday by calling it a salary cap and said the union will not renegotiate the previous agreement.

"That the league is trying to take advantage of a global health crisis to get what they've failed to achieve in the past — and to anonymously negotiate through the media for the last several days — suggests they know exactly how this will be received," Clark said.

RELATED: Is baseball shooting itself in the foot? Bryce Harper's comments show the struggle ahead

The MLB's latest proposal aims to account for a loss of between $4-5 billion in ticket sales that will be forfeited as a result of playing in empty ballparks. Clark said the owners struck the initial agreement knowing that any potential season likely would not include fans in the stands.

Colorado Rockies star Nolan Arenado also agreed with Snell's remarks, but said he understands why they haven't been received very well by the public.

“I think he was being honest, just being real,” Arenado told The Athletic. “He made a lot of good points. There are some points he made that were true, that are facts. A lot of it gets misperceived. Trying to get the public to understand us, it’s not going to work very well in our favor. I guarantee if you read the comments, you’re probably thinking, ‘You don’t have to work 12 hours a day. You’re not the one without a job. You’re still getting paid.’ Those people have a right to say that.”

Any return to the diamond in 2020 appears now to hinge on pay negotiations between the owners and MLBPA, which reportedly has requested financial documents from MLB. If the negotiations stall and the season unravels, 2020 will be the first year in the history of the MLB that no baseball was played.