What would no 2020 MLB season mean for the Phillies? 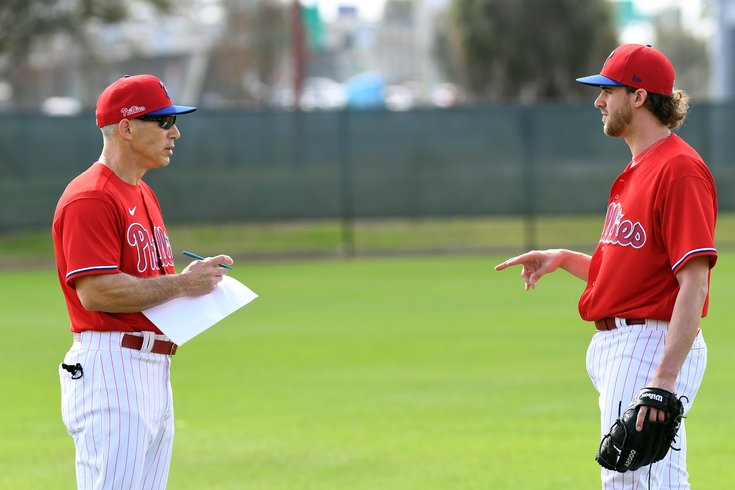 The Phillies have a new approach in spring training this spring.

The nightmare scenario is looking more and more likely, as baseball's ownership and players seem miles apart from striking a deal to start the 2020 MLB season.

We are already in June, and a re-started spring training would take at least two weeks notice to get up and running before three weeks of training camp and then finally "regular season" games. So the best case situation would be for the players and owners to agree this week, theoretically start spring games in July, and start the season in August.

Perhaps we are inevitably headed toward some kind of watered down 30-to-50 game season (extremely less than the usual 162 games). In that potential arrangement, there would be almost no room for error, as the best team would not be as rewarded as the hottest team out of the gates.

Or, maybe the players are so committed to protecting their health and their wallets that they refuse to take what look to be necessary pay cuts and just punt on 2020.

It really could go either way:

Major League Baseball and the MLB Players Association (MLBPA) have been negotiating for nearly four weeks over a plan to play a shortened season in 2020. Discussions have been contentious, and the two sides are struggling to come to terms over player compensation. Negotiations started on May 12, two months after the league went on hiatus because of the coronavirus pandemic. The MLBPA submitted a counterproposal to the league last week that was reportedly rejected a few days later. The league is not planning make a counteroffer.

The MLBPA plan featured a 114-game schedule and a regular season that would have stretched through October. The league, meanwhile, submitted a plan for an 82-game season and wanted players making the most money to take massive salary cuts.  [CBS Sports]

Of course, just as we were ready to post this article, Bob Nightengale tweeted that there "will definitely be a season." And that was shortly followed by the MLB reportedly coming back to the players with what may be a more reasonable plan:

There is no guarantee the players will be good with that plan and this could continue to drag out and the longer it does the more a "no season" scenario comes into play. Still, we are still really, really hoping for the best.

This lost period of sports seems to finally be reaching its end, as the PGA Tour is slated to resume later this week in Texas and the NBA and NHL each have agreed on plans to resume play at the end of July. The NFL, too, looks set to start in-person training camps in August with a target to start their regular season in September.

Will there be no baseball? The Phillies were building (or at least trying to build) a contender. What would a lost 2020 season mean for the franchise?

The first and most obvious consequence of no 2020 season is the impact it would have on the development of important prospects like Alec Bohm and Spencer Howard. We already examined the cost on the organization of the cancellation of the 2020 minor league season, but we surmised that expanded regular season rosters would allow the Phils to include their top two youngsters to help them continue to develop — while providing valuable big league reps. With no season that goes away too, and we have to wait another year to see what the Phillies have in them.

A year away from competitive baseball will have negative effects on nearly everyone in the game, but Howard and Bohm are 23 and on the cusp of making the leap to the next level. If their development is stunted, their careers could forever become "what ifs."

One of the main reasons the Phillies were comfortable spending $330 million on Bryce Harper, and having him under contract for a whopping 13 seasons was knowing the team would get him in his prime. In theory, the money spent on old man Harper would have been worth it, as they team got to also pay him below market value during his prime. He is 27, his prime is right now. And he is sitting at home in Las Vegas — not playing right field at Citizens Bank Park.

Several key Phillies players will be skipping a year in the primes of their career, like Aaron Nola, Jean Segura, and of course J.T. Realmuto. For these guys, it's not about the money. It's about the team missing out on production. In the 1940s, many great baseball players served in World War II. Ted Williams, for example, missed three seasons to serve overseas — his age 24-to-26 seasons. He still hit 521 homers. Imagine how much better his career would have been with those three seasons also in the books? Players all across the league from Mike Trout to Harper to Gerrit Cole and so on will have a blank line on their career stat ledgers.

This is a mixed bag but it's also going to make assembling a 2021 roster all the more confusing. Here's a list of players who will become free agents this coming fall:

The good: Philly's $177 million payroll could drop by $78.9 million next season if all of those contracts come off the books.

The bad: They'll have a ton of holes to fill with a luxury tax number that will likely drop next season.

Philly will have zero information to go off of aside from a brief window in spring training to decide whether they want the previously injured Gregorius back. They'll still be waiting to see Zack Wheeler make his Phillies debut after inking him to a five-year, $118 million pact this offseason. It will be awful, confusing and expensive.

We've hinted at it for a while here but the biggest potential setback for the Phillies from a roster and competitive standpoint could be J.T. Realmuto. The Phils catcher had an arbitration case this past spring and was awarded just $10 million. He will become the highest paid catcher in history next season. Until COVID-19 struck, there was little doubt as to which team would give him the contract. The Phillies were expected to work out a deal to keep him in Philadelphia during the season. Negotiations are obviously not happening anymore.

For starters, teams have absolutely no idea what the financial structure of the league will look like a year from now. Additionally, if the players and teams can't work out a deal to even hit the field, it doesn't sound like a particular player's extension is a priority right now. The sad part is that this crisis could cost the Phils the best catcher in baseball in the long term. If they don't work out an agreement by this fall, another team could outbid them. With no 2020 season, Realmuto (who is a workhorse behind the plate) will keep tread on his tires making him more valuable next season.

The Phillies longterm plan is clearly getting shredded to bits if the 2020 season doesn't occur. They'll have no idea what they have in their young talent. They will potentially have a roster with no starting shortstop, catcher, centerfielder, and 3/5 of a starting pitching staff. They'll have to spend another season investing in middle-of-the-road veterans to give prospects time to become big-league ready — or they'll have to throw Bohm and Howard into the deep end next season when they are both 24. They will have to construct a starting rotation pretty much from scratch, as Nola and Wheeler will be the only mainstays continuing next season.

And they will have decimated revenues. It will be a struggle for them to spend "stupid money." Even Phillies majority owner John Middleton can't justify that.

What will baseball look like when it finally returns? What will the structure of the league look like and what will the Phillies do with their roster? Things were looking up and now Joe Girardi may be looking at a 2021 debut as Phillies manager. There will be ripple effects for years from a potential lost season. Will the fans come back? Will the Phillies still have the incentive to spend to compete in the loaded NL East? It will take a long time to find out. Hopefully you'll still be reading Phillies articles by then.