Considering that Cole Hamels’ nickname is “Hollywood,” it should come as no surprise that he’s capable of Oscar-worthy presentation. Let’s call it “Best Performance by an Actor in a Leading Role Freaking the #$% Out of a Portion of His Fanbase.” You know, one of those awards they hand out before the broadcast.

“Yeah, it’s great,” Hamels responded to the plaudits he was receiving after the game. “Maybe I’ll look for my second job in trying to act but I don’t know if I’ll be able to pass too well.”

Lights, camera, action: Trailing 2-0 after seven innings against the Cincinnati Reds on Wednesday and having just seen his team record its first hit against the opposing starter, Hamels trudged out to the mound at the beginning of the eighth inning. This wasn’t a huge surprise. Hamels was at 99 pitches, which is a number Ryne Sandberg has allowed him to start an inning from before (just last start against Colorado, for instance), and he had retired 11 of the previous 12 batters.

In reality, the signs were there that nothing was amiss. The trainer didn’t come out to look at Hamels and his teammates weren’t saying their goodbyes in the dugout. In a bit of gamesmanship that definitely doesn’t jibe with the MLB’s pace-of-play initiative, Sandberg simply wanted to buy a little more time for Ken Giles to warm up in the bullpen. The Phillies would go on to win the game 5-4 in extra innings.

“Yeah, I was discussing with [pitching coach Bob McClure] about Cole’s outing and we decided that he had some stress through his whole outing with the baserunners and we just wanted to give Giles more time to warm up,” Sandberg said.

In a nice bit of irony, Sandberg was taking a preventative measure when many naturally thought about the possibility that an injury had already occurred. The whole situation does go to show how much Hamels’ health means to the Phillies in a season where they’ll most likely finish with one of the worst records in baseball. The return in any potential deal that comes back in exchange for their ace is absolutely crucial to their future. Hamels now impressively owns a 2.88 ERA and has gone at least seven innings and given up less than two runs in each of his last six starts.

It also shows that technology allows there to be a whole lot of misinformation in a really short time. That too, but who cares? Let’s get back to the important stuff, like the Phillies’ in-house thespian. When Hamels was asked about what the heck he was doing out there, he got a little defensive (playfully, of course).

Yes Cole, yes you were. It was also correctly pointed out that the situation was reminiscent of some real acting that Hamels had done in an old New Era commercial. God bless YouTube:

“Yeah, sometimes that’s the way I feel when somebody comes out,” Hamels said. “You’re onto it.”

While we’re on the subject of Hamels, another very solid outing means another adjustment to the good ol’ trade value chart. One good Johnny Cueto start in Citizens Bank Park can’t keep this runaway train from chugging along: 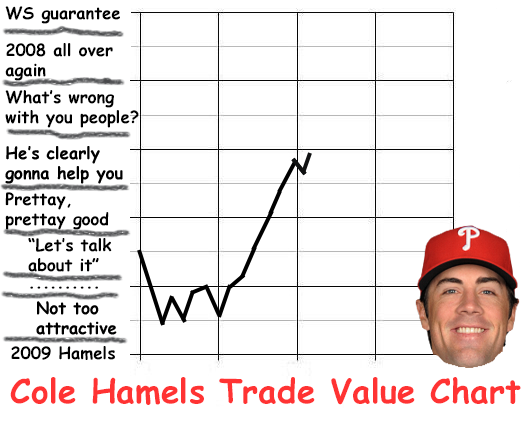 Baseball can be a pretty funny thing. After Tuesday’s game, Freddy Galvis is now hitless in his last 22 at-bats, so of course he was one of the guys that everybody was mobbing in the 11th inning. Thanks to the apparent trampoline stuck in Reds reliever Ryan Mattheus' glove, Cody Asche was able to score winning run from all the way from second on Galvis’ routine grounder to Joey Votto.

This came on a night when the shortstop was moved from his normal spot in the two-hole all the way down to seventh in the Phillies’ lineup. His OPS is down all the way to .646 from.827 on May 15th. There might be some sort of weird inversely proportional relationship with the team’s double-play combo. As soon as Chase Utley started to swing that bat better, Galvis stopped.

Before the game, Sandberg talked about why he believes a longer swing has his shortstop slumping at the dish.
“Freddy is just getting a little bit too anxious and jumpy at home plate, and that’s what’s resulted in the fly ball outs,” Sandberg said. “Not so short and compact like he was, and he’s just a little bit too long and catching some pitches out in front of home plate. That’s resulted in the fly balls.”

So, to recap: Freddy Galvis is still very much slumping, and Freddy Galvis was the player his teammates celebrated around at the end of the game. Sometimes it’s not supposed to make sense.