Phillies president Andy MacPhail: 'Money is not the issue,' but we won't 'do anything impulsive' in free agency 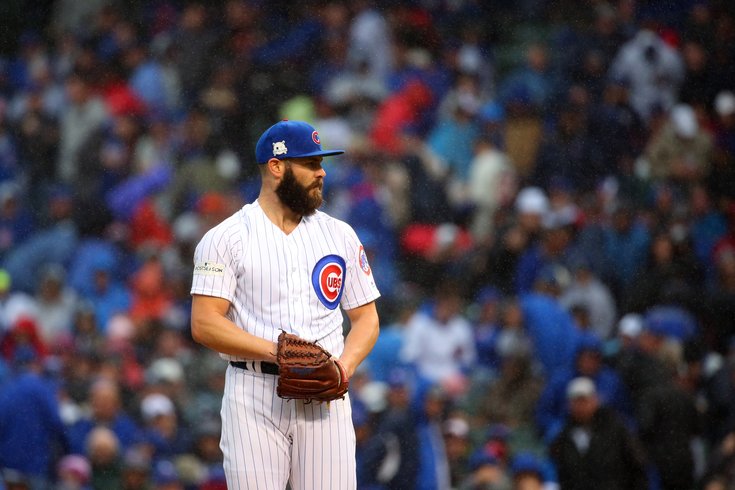 Starting pitcher Jake Arrieta is available, but it doesn't sound like he'll be joining the Phillies.

On Friday morning, Andy MacPhail, now in his third year as president of the Phillies, met with the media in Clearwater for his first press conference of spring training and offered a sort of state of the team address.

According to MacPhail, he likes the way things have progressed since he took over the organization, both on and off the field, but understands there's still a lot of work to be done. After a 66-96 record in 2017, and five straight losing seasons overall, the longtime baseball exec believes the team has a number of players who could take a step forward in 2018, while also recognizing their best chance to compete this season would likely mean adding an arm or two.

"Last year's team lost five more games than the year before, but I think everybody recognizes that was a very positive year for us based on how the team performed after the All-Star break," MacPhail said. "I'm excited. We have a group of young players – particularly position players – that deserve the opportunity to play. They've demonstrated enough ability that we owe them the opportunity to see if they can play.

"No one in this game can ever have enough pitching; that always is a subject for us to try to look into and improve, like every other club. But, by and large, I'm satisfied. It can all change with a collision in center field tomorrow, but right now I'm very happy. Not just with the product you see on the field, but there have been, by my way of calculating it, really significant changes to the organization."

From there, MacPhail outlined several additions made by the Phillies, from their analytics department which now employees nine full-time employees to their 24 additional hires in player development to the projected $110 million they're sinking into renovations at Citizens Bank Park.

Overall, the team has hired 61 people to their baseball staff, but the additions the fans really care about are the ones they'll see on the CBP grass come April.

With so many free agents still available – not to mention the fact that the Phillies currently have the lowest projected payroll in all of baseball at just over $44 million – MacPhail recognizes the team has a chance to add an impact starter to its rotation, something both general manager Matt Klentak and first-year manager Gabe Kapler addressed earlier in the week.

"It's my job to stay on top of that and see what makes sense," MacPhail said. "And that's really kind of the critical element, isn't it? When and where. I don't think anybody questions, or should question, the commitment ownership has shown in the payrolls it's had. It's our job as managing to make sure their resources are deployed as intelligently as they can to get us to the postseason as quickly as we can. In my judgment, that meant an infrastructure adjustment – young players demonstrating how close they are, and then once they demonstrate where you have some holes, you can fill in there.

"I think Matt [Klentak] used the word discipline yesterday, I think the player acquisition business today is a 12-month process. The best signing I ever made in my GM career was in February of 1991, which was unheard of. And the guy was named (2018 Hall of Fame inductee) Jack Morris. So, you're always looking to improve.

"Money is not the issue. It's really more about what makes sense for us now. And you don't want to do anything impulsive because something is out there that you may or may not have anticipated."

In other words, the Phillies don't want to add payroll just for the sake of adding payroll.

And with several of the available free agent pitchers like Jake Arrieta, Alex Cobb and Lance Lynn either getting up there in age or bringing past injuries along with them, they don't want to put themselves in a position a few years from now in which they can't afford to sign the player that might put them over the top because they have too much money tied up in an aging starter who is no longer worth the money they committed to him back when they were still very much rebuilding.

It makes sense, and should certainly make you feel better about their last-place payroll, especially after the Phillies signed Carlos Santana and showed you they weren't afraid to make a big splash in free agency.

That, however, doesn't mean the Phillies are ignoring what's out there on the free agent market. It's actually quite the opposite, given the fact that all three of their top decision-makers admitted a need to add starting pitchers. They're just not in a rush to do so, despite the quality options that are still available.

"There are some guys out there now that would help any team," MacPhail said. "It's just a function of where you are, who you are and where you think you are in that process. And what you're trying to do. The other mistake other people make is – this isn't the only chance you'll ever have to improve your team.

"There are opportunities that are always evolving. We just need to stay on top of those and understand what they are."