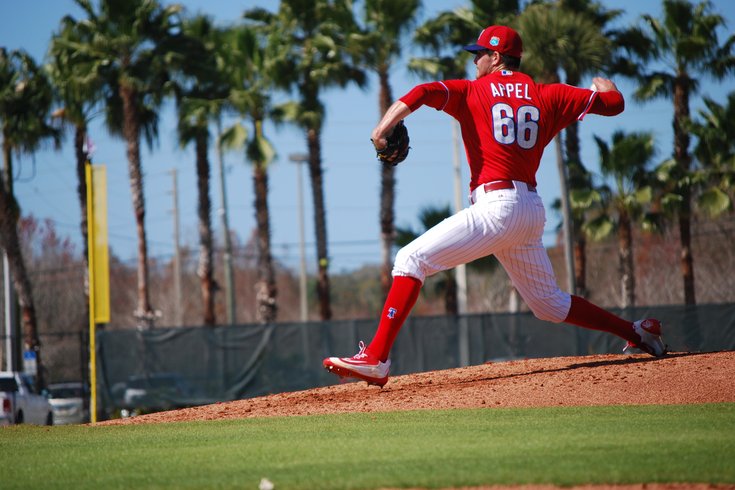 Mark Appel, the former No. 1 overall pick acquired in the December trade that sent Ken Giles to the Houston Astros, underwent season-ending elbow surgery on Wednesday.

Appel had been placed on the disabled list at Triple-A Lehigh Valley a month ago with a right shoulder strain. The elbow issue surfaced after Appel rebooting his throwing program while rehabbing this month in Clearwater, Fla.

Appel’s procedure on Wednesday involved having a bone spur removed from his right elbow. The recovery time is estimated to be between four and six months.

Appel, who turns 25 next month, is expected to make a full recovery and be ready for the start of spring training.

Thank you all who have reached out to wish me a speedy recovery and pray for me! I'm feeling great and thankful for a successful operation!

The No. 1 overall pick in the 2013 draft, Appel was acquired by the Phillies in the December trade that sent Ken Giles to the Houston Astros. Appel was 3-3 with a 4.46 ERA in eight starts wth the IronPigs this season, striking out 34 while walking 20 in 38 1/3 innings.

Appel is 19-14 with a 5.59 ERA in 62 games (61 starts) in his minor league career. Appel was drafted in the top 10 picks of the MLB draft in back-to-back years, but opted to stay at Stanford when he couldn’t come to terms with the Pittsburgh Pirates, who selected him with the 8th overall pick in the 2012 draft.

Appel was ranked the 7th best prospect in the Phillies farm system by both Baseball America and Baseball Prospectus entering the 2016 season.