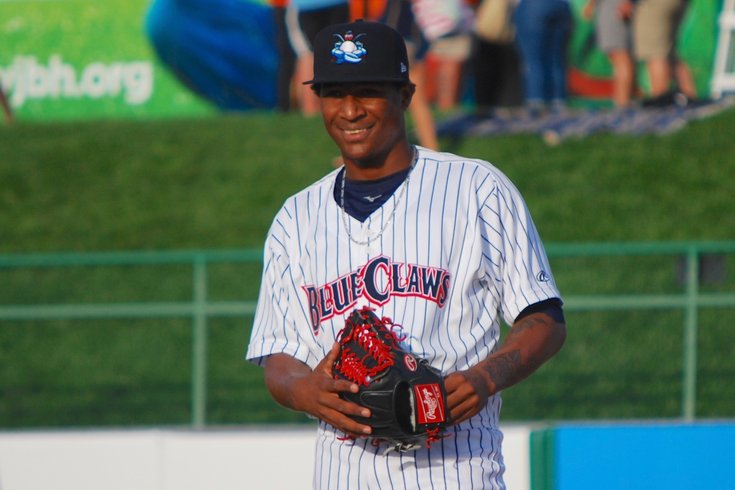 Sixto Sanchez has been clocked at 102-MPH, has a 99-to-14 strikeout-to-walk ratio since last summer, and doesn't turn 19 until the end of next week. Yes, there's a lot to like. And he should be smiling.

First off, an apology to the dozens of pitchers in the Phillies farm system worthy of attention. We see you, Franklyn Kilome, really, we do. You too, JoJo Romero, Ranger Suarez, Adonis Medina, and the rest of those talented arms below Reading.

Perhaps it’s because the Williamsport Crosscutters began their season since the last edition of the power rankings, or because a couple of younger outfield prospects have gotten hot, or maybe it’s just a combination of all of that that led to the latest Phillies Prospect Power Rankings being populated with position players.

Of the dozen names listed below, just two are pitchers. But, don’t worry, we bookended the rankings with a pair of teammates who are more than worthy of their respective spots on the list.

*All stats are through Tuesday’s games

A month ago, we thought about putting Sixto Sanchez at No.1 because there was no obvious No.1, but he had just missed a month with a (minor) neck injury and we honestly hadn’t laid eyes on him in a game yet and didn’t want to label an 18-year-old the best. Well, a lot has changed since then, really. Sanchez hasn’t allowed more than two runs in any of the six starts he’s made since returning to Lakewood’s rotation and we did get to see the kid with the triple-digit fastball and Cliff Lee-like control (99-to-14 strikeout-to-walk ratio since last summer) late last month. Sanchez is special. But we should put out the disclaimer that he doesn’t turn 19 until next Saturday, so, he’s a long way from the big leagues at the moment.

Sixto Sanchez threw 97-MPH FB on an 0-2 pitch to collect 7th K of night to end 5th. He has 46/4 K/BB ratio this season. Here he is pregame: pic.twitter.com/sfndSJWgoS

With the season two months old and J.P. Crawford hitting under the Mendoza line (.194) with seven extra-base hits in his first 56 games of the season, the struggling shortstop prospect got a week-long break with a minor nagging injury. Here’s what he’s done since returning to the IronPigs lineup on June 20, a day after our last power rankings: .271/.375/.583, with six home runs, six doubles, and three triples in 26 games. The next eight weeks will be telling, to see if Crawford can take the momentum he’s built in the last month and finish strong. But it seems like something (perhaps nearly dropping out of Baseball America’s latest top 100 prospect list) has got him going.

Arguably the steadiest performer in the Phillies farm system in the last two years, Hoskins hasn’t had a great July (.160, one home run in 14 games) but his numbers since our last rankings a month ago (.267/.365/.489, five home runs in 25 games) have still been solid. Hoskins probably isn’t long for this list. Once there’s an opening on the major league roster (read: if the Phillies are able to trade Tommy Joseph) Hoskins will have a regular place in Pete Mackanin’s lineup.

Has the power teetered off some since his spectacular six-week start to the season? Surely, but that was probably to be expected. Kingery has six home runs in his last 42 games after hitting 16 in his first 45 games. But the power drop hasn't affected his overall performance: Kingery is still hitting .300 with a .816 OPS in those aforementioned 42 games. Kingery doesn’t have to be added to the 40-man roster this winter (while Crawford, Hoskins, and others do) so it’s likely he’ll finish out the season at Triple-A and get back on the big league radar come spring training. 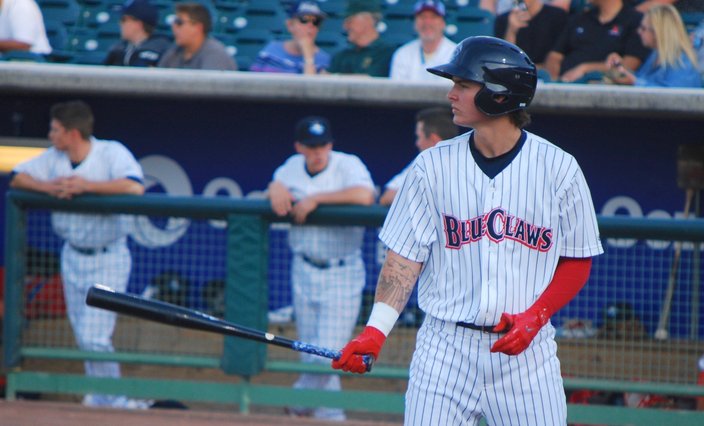 It’s been a streaky first full pro season for the former No.1 overall pick, which should probably be expected. Try going from playing a two to three times a week in high school to playing every day for a six-month stretch over the course of the summer while also trying to put on weight and maintain it, and adjust to life traveling on lengthy bus rides, too. This isn’t said to make any excuses for any player’s overall numbers, it’s said because it’s a fact. Moniak has a long way to go in a career that only began 13 months ago, and his progress should be fun to watch.

Is he going to follow Nick Williams from wearing Pigs clothing to being a regular in the Phillies lineup? Aaron Altherr is likley going to miss 3-4 weeks with a hamstring injury and although Howie Kendrick is likely to come off the DL before the end of the weekend, the Phillies don’t have any obvious corner outfield to get the majority of reps in August, when Kendrick (and possibly Daniel Nava, too) are likely gone via deadline trade. Roman Quinn’s elbow injury (he hasn’t played in a game in nearly two months) prevents him from being that guy. Cozens has slowed down since a monster May, but is probably due to get a big league look before the end of 2017. So, why not August? Well, he has struck out 43 times in his last 95 at-bats in Allentown.

Something pretty remarkable happened since the last edition of these rankings: Alfaro collected a dozen walks in a 20-game stretch from June 15 to July 8. It was notable because Alfaro had just 22 walks in 97 games in Double-A last season, and a total of 32 in 173 games in the previous two years combined. Like Crawford, Alfaro has tools people like. But he’s also got some work to do, both at and behind the plate. He’ll continue getting regular at-bats and tutoring at Triple-A to prepare him for the big league reps that are coming in 2018.

This is Randolph’s first appearance on this list since the initial list back at the end of spring training. And it’s a worthy appearance because it’s difficult to find anyone at any level who’s been as hot in the last month. Randolph has reached base safely in 17 straight games and is slashing .325/.467/.506 with three home runs and four doubles in 25 games since June 19. The Phillies have a lot of talented outfield prospects (more are coming on this list), and Randolph, the sometimes forgotten first-round pick from two years ago, is certainly one of them.

Roman Quinn and Jesen Therrien (2011 draftees) may be the only prospects who have been in the Phillies system longer than Tocci, who signed as an international free agent on his 16th birthday in August of 2011. Tocci has been a talented hitter upon arrival, but he’s really turned it on lately and rather than wasting any more space here you can simply read the story that ran on this site earlier this week.

Jhailyn Ortiz with a two-run triple to left field to get Williamsport on the board pic.twitter.com/9CAjF64SJc

The guy the Phillies selected with the seventh overall pick in last month’s MLB draft deserves a spot on this list, but it was difficult to put him ahead of the other talented hitter who has out-produced him in the first month of play in the New York-Penn League. Ortiz’s 1.002 OPS ranks third best in the league. The big-bodied Dominican, who doesn’t turn 19 until November, signed for a club record $4 million two summers ago and the early returns are promising. Our friend Bob Brookover wrote a fun story on Ortiz earlier this month.

The 21-year-old Haseley literally hit the ground running when he began his pro career last month, banging out seven hits to go alongside two walks in three games with the Gulf Coast League. He earned a quick promotion to Williamsport, where he’s continued to hit. With Tocci, Moniak, and Haseley, the Phillies have a nice collection of center fielders on the farm. It’ll be interesting to see where they all are in the summer of 2019.

Any of the pitchers I mentioned at the very top could easily be in this spot. Ditto the three pitchers who dropped out (see below). But Lakewood left-hander Nick Fanti threw a no-hitter on Monday, and struck out 12 while walking one in that no-hitter. And it was his second no-hitter of the season, after throwing the first 8 2/3 innings of a combined one back in early May. And Fanti, a 30th-round pick in 2015, is almost averaging one walk per start with a sterling 94-to-17 strikeout-to-walk rate in 15 starts this season. Yes, there are pitchers with bigger arms and higher ceilings. But in a power rankings list, none are unseating Fanti this week.

Next up: Therrien. The Phillies are likely to trade at least one veteran reliever and possibly two in Pat Neshek and Joaquin Benoit before the July 31 trade deadline. Armed with a mid-90s fastball and a killer slider, Therrien has continued to shine since his promotion to Triple-A and has a 62-to-7 strikeout-to-walk ratio overall in 37 games this season.