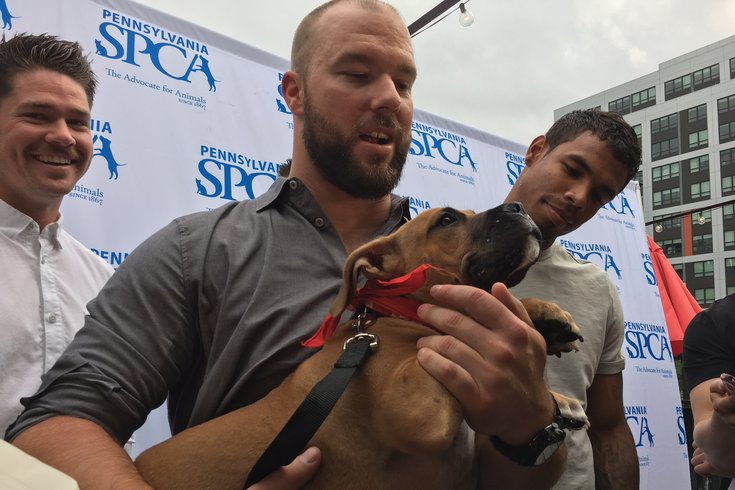 Cameron Rupp, surrounded by teammates Nick Williams and Andrew Knapp, shows off an adoptable puppy from the Pennsylvania SPCA during his "Ruppapalooza" event on Thursday night.

Cameron Rupp is in the middle of a timeshare at the catching position with Andrew Knapp this summer. His third full season in the major leagues has left some uncertainty for his future, although that can be said of a vast majority of players on the rebuilding Phillies in 2017.

One thing was certain this week: Rupp enjoyed the best 24-hour period of the summer between Wednesday and Thursday nights when he followed up a two-home run game in a decisive win over the American League-best Houston Astros with the first charity event of his professional career.

Ruppapalooza, which sold out on the morning of the event, was a rousing success.

“It’s awesome,” said Rupp, who watched established Phillies stars hold their own charity events in his first few years with the team.

“Going to Cole’s, Chase’s, Chooch’s, Howie’s, going to those events, my first few years I thought about having one. So having the opportunity to have one and it sells out, it’s incredible.”

The event at Morgan's Pier, supporting the Pennsylvania SPCA, featured live music from country singer-songwriter Tyler Reeve, raffles and auction items, guest Phillies bartenders (Nick Williams, Tommy Joseph, and Aaron Nola were among the many players in attendance), an appearance by the Phillie Phanatic, and, of course, adoptable dogs.

“I hope somebody takes this guy home before I do, and I’m not allowed to,” Rupp joked while holding one puppy in his hand Thursday night. “I have three at the house and I have somebody that makes the rules, it’s not me.”

A who’s who of Phillies people were at the event – it wasn’t just the Phanatic who dropped by to pet some pups and mingle with fans who paid $35 for the charity event. Ownership partner John Middleton, team president Andy MacPhail, general manager Matt Klentak, and manager Pete Mackanin came out Thursday night, too. 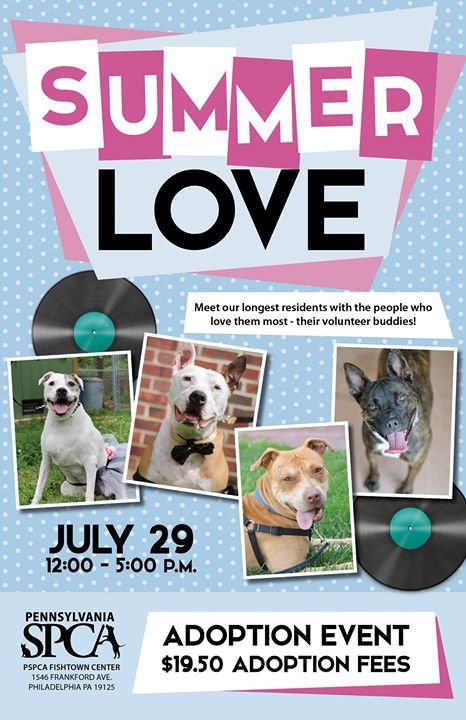 The PSPCA will hold an event this Saturday for some of its longest-tenured dogs.

If you missed out on Thursday, you still have a chance to mingle with some of the night’s attendees – the PSPCA is hosting another event on Saturday at their Fishtown Center (1546 Frankford Avenue). The ‘Summer Lovin’ event, which takes place from 12-5 p.m., will feature the longest-tenured tenants with adoption fees lowered to $19.50 (a throwback to the movie ‘Grease,’ which, of course, was set in the 1950s).

In addition to the adoptable dogs, Laura Garber, a certified professional dog trainer and PSPCA behavior manager, will be on hand to answer any questions potential adopters may have.

“Every dog needs a home, it doesn’t matter how old, how young,” Rupp said. “Older dogs still sometimes act like puppies. They might not be as active or have as much energy, but when they have a home, they’re happy.”