Phillies season preview: How many closers will Kapler use — and does he have enough bullpen depth? 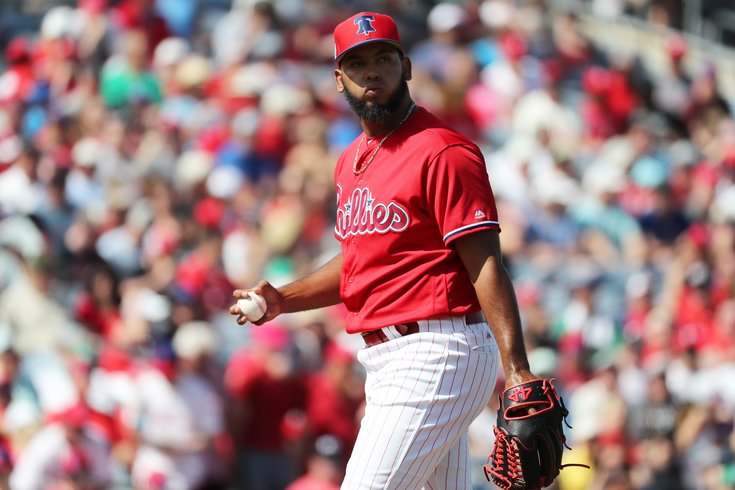 Over the last two weeks of spring training, the Phillies turn their prep work to get ready for the regular season into overdrive.

We'll do the same thing here at PhillyVoice. As the March 28 season opener against the Braves approaches, we'll break down everything you need to know to get ready for one of the most anticipated Phillies seasons ever.

On a macro level, the Phillies' bullpen isn't all the different from their starting rotation — it's top-heavy with a lot of question marks beyond that.

And, much like the rotation, the 'pen remains largely unchanged from a year before, with the exception of one major signing this winter, David Robertson. The Phillies also got Juan Nicasio in the Jean Segura trade and will bring back closer Seranthony Dominguez, as well as Pat Neshek and Hector Neris. If the Phillies opt for an eight-man bullpen, the other names making the Opening Day roster will likely include three of the following, at least until Tommy Hunter (flexor strain) is healthy: Victor Arano, who has struggled mightily this spring, Edubray Ramos, Adam Morgan, Jose Alvarez, and Yacksel Rios.

But for a team without a ton of starting pitching depth, especially one with aspirations of a deep playoff run, is that enough? Let's take a closer look at what the Phillies have — and what they could possibly add before the season gets underway on Thursday...

Breaking down every single member of the Phillies bullpen, one that will likely be in flux throughout the season, would take too much time, so let's keep it basic by focusing on the most important members of the group: the closer, the set-up guy and the set-up guy's set-up guy. In other words, let's focus on the guys who will be in charge of seventh-, eighth-, and ninth-inning duties this year.

For the Phillies, those three innings will likely be split by more than three guys, based on manager Gabe Kapler's penchant for pitching changes, so for today's preview, we'll focus on Seranthony Dominguez, David Robertson, Pat Neshek and Hector Neris.

As you can see by those projections, no one really knows who the Phillies closer is going to be this season, and by the sound of it, it's going to be more of a closer-by-committee than anything else. And knowing Gabe Kapler's style, that certainly tracks.

Beyond those four — hell, even among those four — the Phillies have a lot of questions, and if they don't like the answers they find, there's still some time to address the need for more bullpen depth. Corey Seidman of NBC Sports Philadelphia pointed out some options in a recent post titled "Do Phillies have enough in bullpen besides their top trio?"

But if the Phillies are unsure whether this unit can protect enough leads ... Craig Kimbrel is still out there. Even at this point, you’re not getting him for cheap. Signing Kimbrel might require only a two-year commitment at this point but it would still take the Phillies right up against the luxury tax threshold, which has more meaningful ramifications down the road than just this season.

Former Phillie Ryan Madson, now 38 years old, is also still out there. Like Kimbrel, he’s been unsatisfied with the offers he’s received. Madson was excellent in 2017 (1.83 ERA in 60 appearances) but last season had his highest ERA (5.47) since becoming a full-time reliever in 2007. He wouldn’t cost nearly as much as Kimbrel.  [nbcsports.com]

With the start of the season only a few days away, the Phillies are running out of time to make a decision and Kimbrel is reportedly deciding between the Braves and Brewers.

In baseball, bullpens are constantly in flux, so keeping track of everyone on every other team is nearly impossible. That's why, for today's NL East comparison, we'll be leaning heavily on the local reporters who cover each of the Phillies division rivals. They'll be able to give you a better appraisal of their teams' bullpens than this writer ever will...

According to Mark Zuckerman of MASNSports.com, the Nationals bullpen has even more question marks than the Phillies. The one thing they do have over the Phillies, however, is one of the best closers in all of baseball from a year ago.

The only sure thing in the entire bullpen is the man who pitches the ninth inning. Sean Doolittle arguably was the best closer in the National League last season, owner of a spiffy 1.60 ERA, 0.600 WHIP, ridiculous 60-to-6 strikeout-to-walk rate and 25 saves in 26 opportunities.

The only downside to Doolittle’s season, of course, was the fact he missed two months with a left foot injury that seemed minor at the outset but proved far more problematic. He did look just like his pre-injury self in September, and he insisted this winter the ailment is behind him and should not have any lingering effects. But the cautious-minded observer will nonetheless be watching him closely this spring and early in the regular season for any signs of trouble.  [masnsports.com]

One of the Met's big offseason acquisitions, Diaz led the major leagues in saves last season with 57 while posting an impressive 1.96 ERA. And that was while pitching in the American League. The Mets also brought back Jeurys Familia after he spent the second half of last season in Oakland. The former Mets closer will now serve as the setup man for Diaz, giving New York quite a solid back-end of their bullpen.

Having Diaz and Familia will certainly go a long way to masking the Mets’ deficiencies in the bullpen. Their presence means Lugo can enter in the seventh inning, rather than Gsellman or Wilson. For analytics followers, Lugo owned a 2.2 WAR last year – far better than Gsellman (-0.3) or Wilson (0.7).

Look at it another way. Adding Diaz means the Mets potentially have three relievers capable of delivering WARs of over 1.0 – Diaz, Familia, and Lugo. They didn’t have that last year, and it showed.

Will adding Diaz and bringing back Familia equal more wins for the Mets in 2019? It definitely gives them the chance to do so. The middle relievers will have to show improvement, but the back end of the bullpen should be better.  [risingapple.com]

Last season, Arodys Vizcaíno was the Braves closer until injuries kept him sidelined and allowed A.J. Minter to take over that role. This season, the Braves are hoping Vizcaíno can return to his closer form, but they don't yet seem sold on him, especially if the aforementioned Craig Kimbrel rumors are true.

Vizcaino was effective last year, posting a 2.11 ERA over 38 1/3 innings and converting 16 of 18 save opportunities. Per Statcast™, his average four-seam velocity (97.4 mph) was down just a tick from his 97.9 mph average in 2017. An MRI scan in October once again showed no structural damage in his inflamed right shoulder, but it remains to be seen whether Vizcaino can stay healthy.

Given those concerns, the Braves may opt to open the season with Minter as closer. The southpaw displayed his tremendous potential when he struck out 43.3 percent of the batters he faced while making the first 16 appearances of his career in 2017. The percentage dropped to 26.5 last year, which he blamed on attempting to be too fine on the corners during much of the season's first two months.

Minter posted a 2.18 ERA as he struck out 36.4 percent of the batters faced in June and July. His promising stretch was halted by the lower-back discomfort he battled throughout most of August. The changeup that he used more frequently in September could prove to be a valuable weapon as he attempts to regain the dominant form flashed in 2017.  [mlb.com]

The Marlins bullpen situation is somewhat of a mess — as is the rest of the organization. It appears Drew Streckenrider has the edge for the 2019 closer job, but it's also looking like the Marlins could be going closer-by-committee this season.

When Kyle Barraclough was traded to the Nationals in October, the bullpen lost its most experienced closer candidate. Barraclough, the National League Reliever of the Month last June, struggled from July through the end of the season. Still, he was a veteran with a track record.

Now, the two primary options are right-hander Drew Steckenrider, who appeared in 71 games as a rookie last year, and lefty Adam Conley, a converted starter.

At the Winter Meetings in December, Mattingly didn't rule out using matchups to determine who will close. So, say, in a save situation, if an opponent has its top left-handed hitters lined up in the ninth inning, Conley may get the call. If not, Steckenrider may handle the role.  [mlb.com]

Dominguez could ultimately become the Phillies closer of the future, as he's under team control through the 2025 season and isn't eligible for arbitration until 2022. He's still just 23 years old and has just one season of MLB experience, and that's easy to forget watching him on the mound. It's also important considering the Phillies other top two relievers, Robertson and Neshek, will be 34 and 39 respectively by the time this season comes to an end.