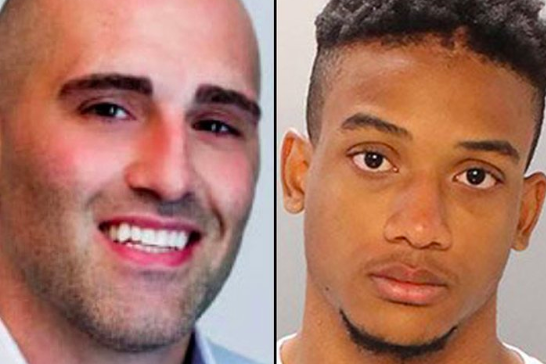 Michael White, 22, (right) was found not guilty of voluntary manslaughter on Thursday in the fatal stabbing of Sean Schellenger.

The three-day trial concluded Michael White being acquitted on almost all charges, including voluntary manslaughter, possession of an instrument of crime and obstruction of justice. He was found guilty of tampering with evidence.

White testified that he stabbed Sean Schellenger, 37, in an act of self defense when Schellenger threatened and tackled him near Rittenhouse Square in July 2018 during a traffic dispute.

White, who is black, said he used a knife to stab Schellenger because he feared for his life, telling the jury that Schellenger, who is white, said through gritted teeth that he was going to "beat the black off" him before charging at him.

The divisive case has attracted a lot of attention among both activists and supporters of each family. After District Attorney Larry Krasner reduced the murder charge to voluntary manslaughter last week, protestors lined the sidewalk outside the D.A.'s office with empty body bags.

Krasner's office released this statement Thursday afternoon regarding the verdict:

"After several hours of deliberation over two days, a Philadelphia jury has found Michael White guilty of the crime of tampering with evidence in order to conceal his role in the death of Sean Schellenger. The jury also acquitted Mr. White of other charges, including Voluntary Manslaughter, after this office rejected higher homicide charges that I determined were inappropriate to pursue as our investigation continued and gathered new information. Simply put, we followed the facts and the law in seeking justice. And we respect the verdict of the jury in this factually and legally complex case.

"I am proud of our Assistant District Attorneys Voci and Dandy, who presented the case skillfully, ethically, and appropriately for what it was: A case about two unique individuals. This Office remains committed to individual justice, which rejects using people as symbols or stereotypes to serve any other agenda.

"My heart goes out to family and friends of Sean Schellenger, whose pain and trauma are evident even today, and to everyone else who has been affected by this tragedy."

After the verdict was announced on Thursday, Schellenger's mother, Linda Schellenger, said Krasner has "blood on his hands" and should be arrested for obstruction of justice, the Inquirer reported.

On the night of July 12, 2018, Schellenger and his friends got into a dispute with the driver of a Ford Taurus near Rittenhouse Park because the Taurus was blocking the intersection of 17th and Chancellor streets.

According to testimony, as the fight escalated, White — who was on his way to deliver a food order to West Philly on his bike — attempted to de-escalate the situation. He said he told Schellenger he didn't need to be a "tough guy."

Schellenger then walked toward White, threatened him with the racial slur and White took out his knife. When Schellenger wrapped his arms around White's waist and lifted him in the air, White stabbed him in the back.