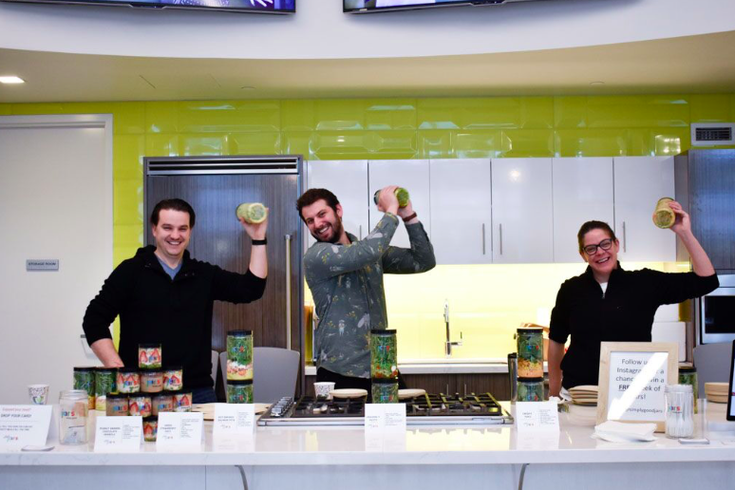 Simply Good Jars, a Philadelphia-based startup that offers jarred salads, will be featured on the season 12 premiere of 'Shark Tank.' Above, chef Jared Cannon, left, and others shake jars of salads.

Cannon recently presented his startup on "Shark Tank" in hopes of landing an investor. His pitch to Mark Cuban, Kevin O'Leary, Lori Greiner, Robert Herjavec and Daymond John will be featured in Friday's episode.

The episode, which airs at 8 p.m. on ABC, marks the premiere of the show's 12th season.

"It was a pretty surreal experience and by far the hardest thing I've ever done. Being on the set was the perfect combination of inspiring, terrifying but surprisingly energizing," the Temple University graduate said. "This year has been tough for so many here in Philadelphia and around the world. It really reinforces the need for social responsibility in business."

Fridges full of the company's signature salads are scattered across the city in gyms, hotels and co-working spaces. The salad needs just 12 seconds of shaking before it's ready to eat.

Cannon created a patent-pending technology to keep food fresh without using preservatives — a move that he said makes restaurant-quality food available in pre-packaged jars for the first time.

The company has championed the reduction of food waste and promoted sustainability. It has reduced 8,700 pounds of trash since it launched, according to Temple's Fox School of Business.

The company also donates one meal to the hungry for every consumer that pledges to reuse the plastic container at home. Consumers can make the pledge by scanning the QR code on the label. More than 45,000 meals have been donated.

Cannon was a chef for 18 years before he pursued his MBA and launched Simply Good Jars, serving at Iron Hill Brewery and Restaurant, Honeygrow and Philly's Tria chain.

The jars can be purchased on the Simply Good Jars website, on GoPuff and at select retailers in Philadelphia, New York and Chicago.