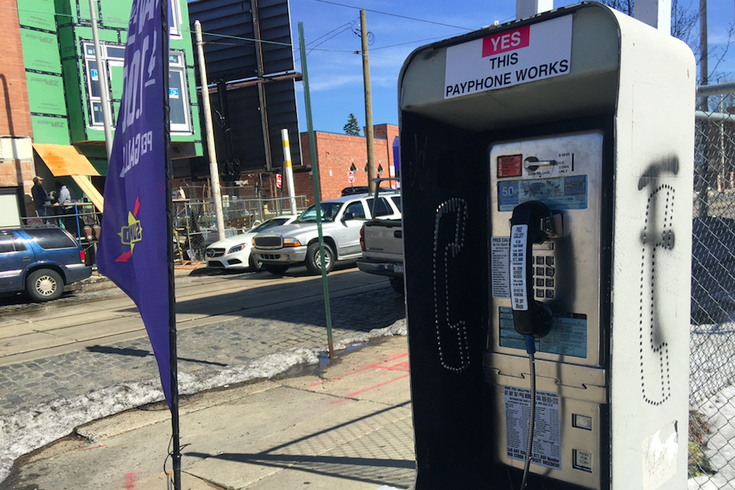 This payphone at 6240 Germantown Ave. claims to work, but would-be users say that most certainly isn't the case.

As a writer, pitches involving the quixotic pursuit of righting abhorrent wrongs always grab my eye.

That’s exactly what happened on March 15 when an email – sans subject, mind you – arrived in our inboxes over here at PhillyVoice world headquarters.

The communique was from a reader named Drewry. It detailed the steps he’s taken since waging war on a payphone outside a Germantown gas station’s mini-mart.

Drewry explained his beef thusly: the “crappy, jalopy” phone is stealing quarters from unwitting passersby who are inclined to use what may be one of the last remaining payphones from sea to shining sea.

(Fine, Siri steered my iPhone to a link claiming some 1.7 billion calls are made on the fewer than 500,000 remaining in the United States, but the point remains that there are fewer payphones out there. #TheMoreYouKnow)

I tried to make a phone call to someone and you can't even hear the dialtone.

I put quarters in and dialed a local number in Germantown not far from where the phone is and though the call did go through and the person wasn't home, I hung up the phone to find out I never got my quarters back.

I tried to push the coin return handle and no change ever came out.

That’s right. The dang phone stole 50 cents. That is emblematic of everything that’s wrong with America.

Drewry posted a YouTube video of the phone – its title is “Shady Acting Payphone in #GermantownPhiladelphia" but doesn’t include footage of someone trying to use it – and wrote a blog post imploring folks to “avoid putting coins” therein.

“Normal pay phones have a dial tone after the person picks up the headset to either call collect or make a local call. This is not the case with this phone on Washington Lane,” Drewry wrote. “Sunoco should be ashamed of themselves for not removing this phone because it negatively impacts their business character.”

Drewry then threw down a challenge that the media should look into the affront against decency and spread the word far and wide. It went a little something like this:

If you take a quick stroll by Germantown & Washington Ln., you'll see the phone up close & personal Robin Leach style. Put a few quarters in it and see for yourself if it returns the quarters after the call not going through.

On Tuesday, I accepted this challenge and approached the “YES THIS PAYPHONE WORKS” kiosk with a handful of quarters.

I picked up the handset and heard no dial tone. (Point, Drewry).

I entered my mobile phone number and was told to deposit 50 cents, which I did. One quarter slid right through the mechanism and the other stayed in the phone. A voice said, “Thank you,” indicating that the call would soon go through.

Well, it didn’t. There was no ringing. When I tried to get my quarter back, the phone did not respond in an appropriate fashion.

Drewry was right! This phone is a non-sentient scam artist!

I scribbled down the phone number for “NewTel Payphone Operations,” listed as the company behind local calls in pursuit of further investigation. (It has many in Philadelphia, apparently.)

This mission would be for naught.

The number listed on the phone merely led to a voicemail to report phones that weren’t working.

Another number I found for the company led to a recording that the number I had dialed was not exactly working. (I left a message so if NewTel responds, I will most certainly update the world on Drewry’s behalf.)

I then took my queries to the Sunoco gas station located at the corner of West Washington Lane and Germantown Avenue near where Germantown and Mt. Airy meet.

A manager identifying himself by first name alone – Solomon – didn’t quite know what to make of it all. He said the phone has been there since before new ownership took over nearly a decade ago.

“Nobody even uses that anymore. I don’t think they come in to check it. They just let it go,” he said of the phone company. “I’m surprised it’s still there. The owner wanted them to get rid of it a long time ago.”

Which brings us back to Drewry’s windmill-tilting post which concludes with the lines, “When will Sunoco on Washington Ln. get rid of this payphone and install an honest one?”

The answer, apparently, is whenever the phone company finally takes it away since the Sunoco folks have no interest in it being there but lack the legal standing to tear it out of the ground.

The moral of this story, folks?

Drewry is right: don’t use the payphone at Germantown Avenue and Washington Lane.