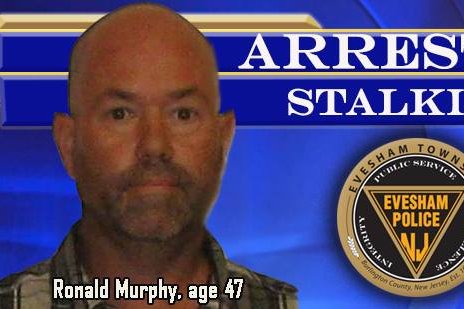 A decade-long nightmare for a South Jersey woman has finally ended.

The Evesham Township Police Department announced Tuesday the arrest of Ronald Murphy, 47, of Philadelphia, for allegedly stalking a woman for the past 10 years.

Authorities said the woman showed up at the police department on May 18, saying she had been repeatedly harassed by an unknown person for several years.

She said the man had sent gifts and cards a few times every year. Recently, however, the alleged creepy behavior had increased. The man set up fake Craigslist ads, left gifts in her home mailbox, and sent inappropriate gifts to her work, police said.

According to the Courier Post, those Craigslist ads were placed on the "women seeking women" section and included the woman's cell phone number.

She had no idea who the person might be. Police served subpoenas to several websites and service providers and were able to track down Murphy, who graduated high school with the victim in 1988.

Police told the Courier Post that Murphy allegedly held a grudge against the victim:

Murphy claimed he was "bullied" by the woman during high school and "has a hatred towards her, which has led him to conduct all of the acts of stalking," according to a probable cause affidavit filed by police.

Murphy was arrested after an interview with investigators. He has been charged with stalking and was placed in Burlington County Jail without bail.