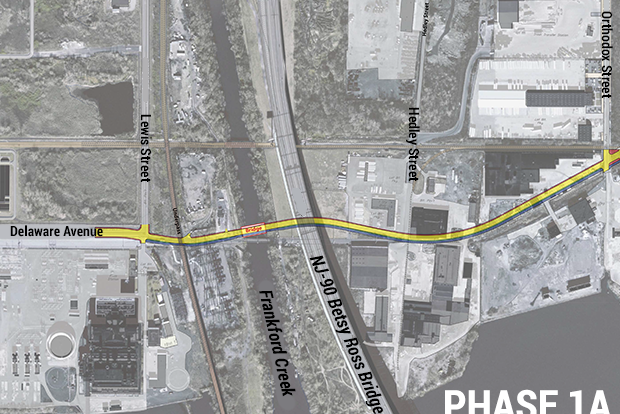 An aerial view of phase one of the Delaware Avenue Extension Project, which opened Tuesday, Dec. 8.

The extension connects Port Richmond to Bridesburg, stretching Delaware Avenue from Lewis Street across the Frankford Creek to Orthodox Street. A map of the extension can be seen below, via the Philadelphia Streets Department: 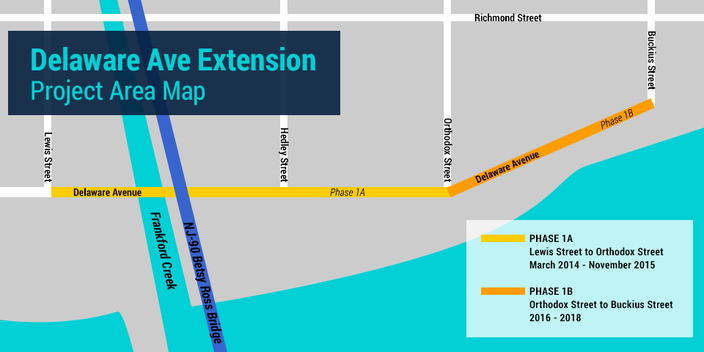 It also includes a multi-use trail along the new 0.6-mile roadway. The project has been years in the making and serves as an important connector to the two communities, according to city officials.

“Philadelphia’s Streets Department and Delaware River City Corporation have led this effort which has been in the works for more than 15 years, and today, with the dedication of this new, critical link, we begin to reshape transportation and recreation in these historic neighborhoods," Mayor Michael Nutter said in a news release following a ribbon-cutting ceremony at the new roadway.

The ribbon has been cut on the Delaware Avenue Extension! pic.twitter.com/wyVIArLE9p

The completion of the roadway marks a historic occasion, according to Curbed Philly, as this is the first major roadway opened in the city in years:

Philly's roads have been re-surfaced, re-paved, and re-directed, but it's been almost three decades since the city has constructed a new major roadway.

The roadway was $14.5 million and federally funded.

Tuesday's opening, which started in March 2014 and was designed by Urban Engineers, Inc. and constructed by Buckley Company, Inc., is the first of two phases in the Delaware River Extension.

The second phase, expected to begin in 2016 and be completed by 2018, will extend the Avenue from Orthodox Street north to Buckius Street, adding a six-foot-wide sidewalk on one side and a 12-foot wide shared use path for cyclists and pedestrians on the other side. It will also include storm-water inlets and pipes, street lights and new a water main.

More details on the project can be found here.