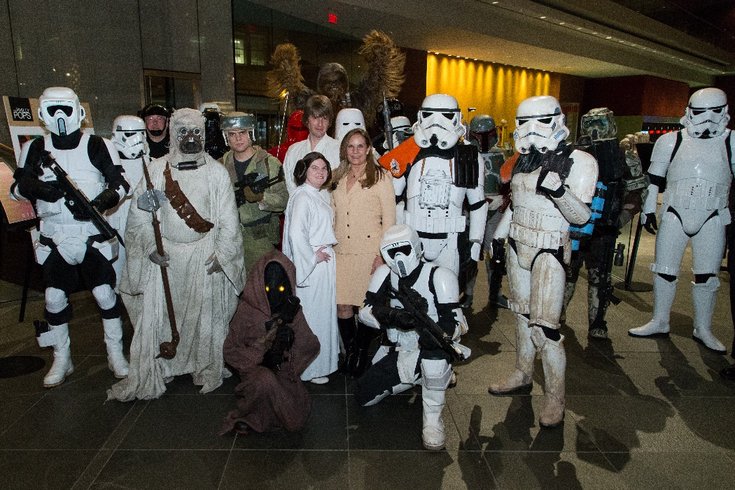 Courtesy of The Philly POPS/PhillyVoice

There will be costumed members of Garrison Carida of the 501st Legion recreating the 'Star Wars' galaxy of characters at the concert. They will pose for photos in the lobby before the concert and during intermission.

A trailer for "Star Wars: The Last Jedi" was recently released during "Monday Night Football" and featured impressive visuals, tons of tension, familiar faces and an adorable bird-like creature called a Porg.

The latest installment in the "Star Wars" franchise is set to hit theaters in December. It's soon, but not soon enough.

Ease the wait by watching The Philly POPS open the 2017-2018 season with a "Star Wars" tribute in honor of the first film's 40th anniversary year. The 65-piece orchestra, led by Music Director Michael Krajewski, will be joined by the POPS Festival Chorus on Oct. 20-22.

The concert will feature the music of John Williams, who composed some of the most popular and recognizable film scores in cinematic history. Besides the "Star Wars" series, he created music for the first three "Harry Potter" films, "Jurassic Park," "Jaws" and "E.T."

In the first half of the concert, the POPS will perform songs from every movie score for which Williams won an Academy Award.

The second half of the show will be fully devoted to the music from "Star Wars."

Adding to the experience, there will be costumed members of Garrison Carida of the 501st Legion recreating the "Star Wars" galaxy of characters.

They will pose for photos in the lobby before the concert and during intermission. Audience members are encouraged to dress up, too.

Tickets start at $35. There will be only three shows.