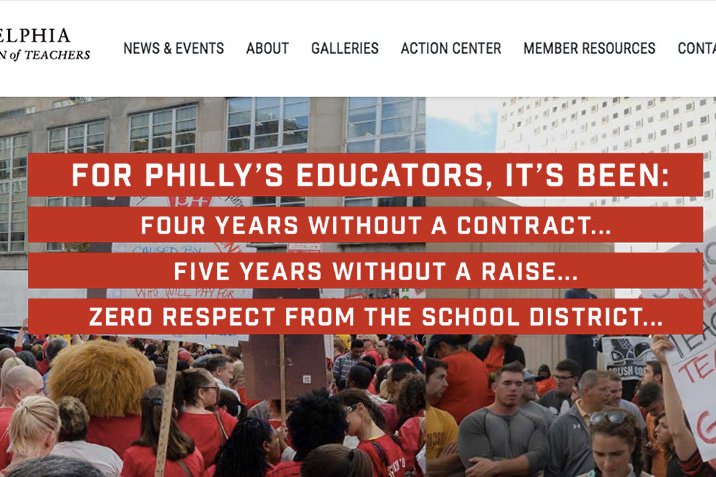 The Philadelphia Federation of Teachers union had stepped up efforts in recent months to put pressure on the school district for a new contract. The union's website was still featuring this image as news broke Friday afternoon of a new pact.

After more than four years of operating without a contract, the School District of Philadelphia and its largest teachers' union have agreed to a tentative agreement for the next three years.

District officials announced the agreement with the Philadelphia Federation of Teachers on Friday afternoon, but said they would not release further details until the state School Reform Commission ratifies the deal.

"We are hopeful that putting this contract in place will mean improved stability for our members and our schoolchildren, and enable Philadelphia to more effectively recruit and retain educators," PFT President Jerry Jordan said in a statement Friday.

Jordan said union members plan to meet and vote on the contract.

District officials did not say when the state may ratify the agreement.

“My top priority this school year has been to get a contract with the [union] that recognizes the hard work of teachers and school staff," District Superintendent William Hite said in a district press release. "Teachers and school staff are at the heart of our work to create great schools close to where children live. They have supported students through the district’s difficult financial times and they are crucial to the progress we are making in schools across the city.”

“The teachers of Philadelphia have gone long enough without a contract and this contract is one that benefits our teachers, our students and the entire School District of Philadelphia,” Joyce Wilkerson, chair of the SRC, added in a statement.

The tentative agreement could mark the beginning of the end to a bitter dispute that culminated in recent months with a teacher's blistering billboard on I-95 South and roughly 1,000 teachers protesting outside city schools last month on May Day.

On Friday, Mayor Jim Kenney said operating for so long without a contract put the district's stability in jeopardy and made it difficult for the city to attract business and families.

"Schools that attract and retain quality teachers are essential to the success of the district and of Philadelphia," he said in a statement. "Today we are taking an important step for students, teachers and Philadelphians.”