July Fourth shooter was 'quite a distance away' from Ben Franklin Parkway, Philly police say 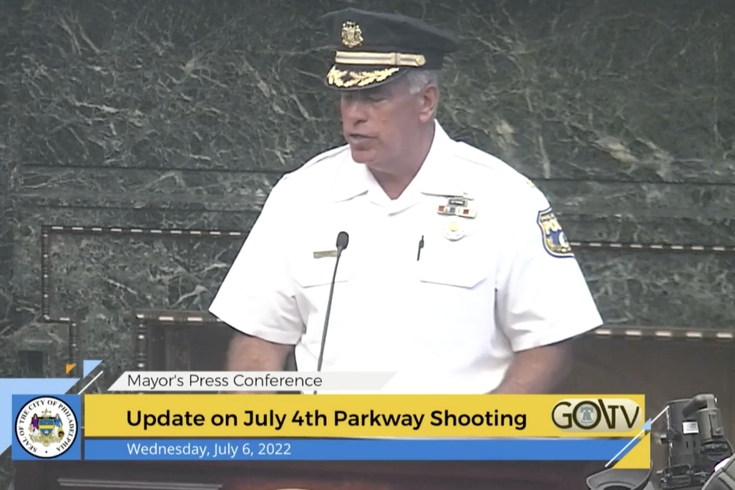 Philadelphia Police Chief Inspector Frank Vanore says the person who shot two officers during the city's Fourth of July fireworks celebration likely was far away from the Benjamin Franklin Parkway. No arrests have been made.

The gunshots that injured two police officers during Philadelphia's Fourth of July celebration appear to have been fired from above and "quite a distance away" from the Benjamin Franklin Parkway, police said Wednesday.

Investigators are still attempting to piece together evidence that will help find the shooter. Both of the 40-caliber bullets that struck the officers came from the same weapon, investigators said. The two rounds collected appeared to be in "pristine" condition. No other bullets have been found at this time.

Identifying the shooter is expected to be an especially difficult task given the long range of the gunshots, Chief Inspector Frank Vanore said.

"Because the bullets were moving so slow and didn't have much momentum left – a 40-caliber round can travel unimpeded ... over 2,200 yards," Vanore said. "Then it's going to stop and come down based on what other variables there are – wind and weather and anything else that's going on. It's going to also depend on the way the person ... fired it."

The shooting happened at 9:47 p.m. Monday, just as the Welcome America fireworks were beginning. A group of police officers were moving into position to form a line separating pedestrians from the Philadelphia Museum of Art. Police stood along the 2500 block of Spring Garden Street, near where the Spring Garden Bridge crosses the Schuylkill River.

Sergio Diggs, a Philadelphia police officer, and John Foster, a Montgomery County Sheriff's Office deputy, suffered graze wounds. They were working security near the south side of the art museum steps.

There were no gunshots heard at the scene, investigators said.

"We have no video evidence that there's muzzle flash or anything from that area," Vanore said.

Diggs, 36, had just thrown out some trash and was walking back to the police line when he was shot. He felt the bullet strike the top of this head and then noticed he was bleeding, Vanore said. Foster, 44, was about 20 feet away from Diggs when he was struck in the shoulder and then saw he was bleeding, too.

The police response to the officers being shot caused more than 1,000 people to flee from the parkway as the fireworks began. Three people suffered minor injuries in that chaos, police said.

Diggs, a 13-year veteran and member of the Philadelphia police's highway patrol unit, and Foster, a member of the Montgomery County bomb squad, were taken to Thomas Jefferson University Hospital. The two men have since been released and are recovering at home.

Vanore displayed the police cap Diggs had been wearing Monday night, showing a hole in the top of the hat. He emphasized how challenging it will be to trace the bullets to a shooter based on current evidence.

"(The shooter) could have been anywhere," Vanore said, adding that some detectives have speculated that the shots could have come from as far away as the Schuylkill Expressway or beyond.

Vanore addressed suggestions from some officials that the gunshots may have been "celebratory" in nature.

"I would be speculating, but like I explained, if you're over a mile away and you're aiming for the officers, that would be almost impossible – because they shot into the air and it's falling down in the wind. It doesn't work that way," Vanore said. "I mean, I fire a gun (and) it's hard enough to hit a target when I was trained to do it, so you're going to fire over a mile and have it come down in an area to hit two police officers. That would be hard, but right now, that's based on the evidence and the interviews we have."

Vanore stressed the importance of collecting as much video evidence as possible from around the time of the shooting.

"This is why we're asking people, anybody that (has video) from the fireworks, if you have video, send it to us," Vanore said. "We'll analyze it. If it's not relevant, we won't use it, but we'd love to see it."

The Philadelphia Fraternal Order of Police Lodge 5 has offered a $20,000 reward for information leading to arrests in the case.

District Attorney Larry Krasner said Wednesday that the investigation will likely be lengthy and warned that firing weapons in this manner can result in serious charges.

"Celebratory gunfire on any occasion or gunfire not aimed at another individual that nonetheless harms others is a very serious crime," Krasner said.

Cell phone footage taken from above the parkway on Monday night showed people rushing away from the festival grounds.

People run for blocks from the Welcome America Festival on the Ben Franklin Parkway after two police officers were shot while working in the area of 2500 Spring Garden Street. A truly terrifying scene on what was supposed to be a night of celebration. @CBSPhilly pic.twitter.com/Bye1OEzQmF

The incident was one of several shootings in the U.S. on July Fourth, including a deadly rooftop rampage in the Highland Park section of Chicago. Seven people were killed and 47 others were injured. A man has since been charged with murder there.

In the aftermath of Monday's incident on the parkway, Philadelphia Mayor Jim Kenney vented about the chronic problem of shootings in the city, and said he looks forward to the end of his second mayoral term in January 2024.

"I'm waiting for something bad to happen all the time. I'll be happy when I'm not mayor and I can enjoy some stuff," Kenney said.

One reporter followed up, asking, "You're looking forward to not being mayor?"

"Yeah, as a matter of fact," Kenney said.

Kenney's off-the-cuff remarks were met with calls for his resignation, prompting the mayor to issue an apology Tuesday.

He repeated Wednesday afternoon that he is committed to his job, and said he spoke in frustration and anger after leaving the hospital, where he met Diggs and his family.

"I'm not a robot. I'm a human being. It's not an accurate statement until I actually retire," Kenney said.

The mayor added that he believes preventing gun violence is attainable, but not without reform.

"We are expected to solve a problem where all the tools to solve the problem have been systematically taken away by the legislature," Kenney said.

In the days since the shooting, city councilmembers have called for more drone and surveillance technology to provide police with more tools to investigate shooting incidents. Council President Darrell Clarke mentioned reintroducing some stop-and-frisk interactions to recover illegally owned weapons. The law enforcement tactic has been largely scaled back by police reforms in the last several years.

"That's a conversation that we're going to have to have," Clarke said Tuesday. "You can't have an environment where everyone is carrying an illegal gun."

On Wednesday, police said they will evaluate all of their security protocols for special events in the city and may expand their coverage zones at future events.

Anyone with information about Monday night's shootings can call 911 or the Philadelphia police tip line at (215) 686-8477. The city also has a resource page where video evidence from the parkway can be uploaded. That page also has information about how spectators who fled the parkway, leaving behind their belongings, can collect their items.