'A Philly Special Christmas' hits No. 1 on Billboard compilations chart 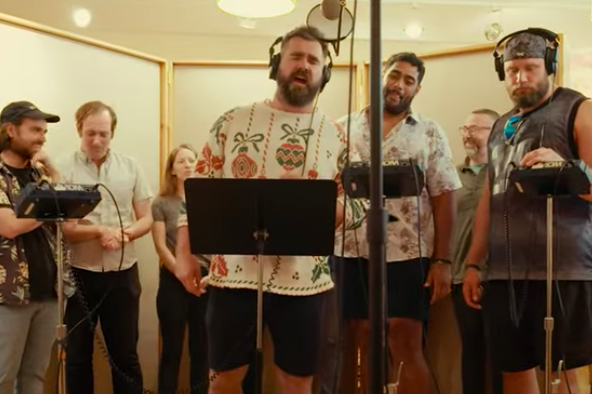 A few Eagles players just scored a huge win off the football field.

MORE: 'Most famous Philadelphian who never lived': Podcast will explore cultural legacy of the 'Rocky' statue

The seven-track album also reached the top 10 on three other Billboard charts – No. 4 on top current album sales, No. 8 on independent albums and No. 9 on top album sales. It was at No. 26 on the top holiday albums chart and No. 80 on the Billboard 200.

"A Philly Christmas Special" was released as a digital download album for purchase and through streaming services on Dec. 23. Six days later, the album had sold nearly 11,000 copies in the U.S., mostly through digital downloads.

The last time a non-soundtrack compilation album sold more in one week was more than two years ago, when the charity album, "Good Music to Avert the Collapse of American Democracy, Volume 2," sold 13,500 copies in October 2020.

Before being released digitally, "A Philly Christmas Special" was released on vinyl, and sold 3,000 copies between the weeks ending Dec. 1 and Dec. 22. The first vinyl pressing sold out instantly, prompting two more sold-out pressings.

"Do not worry: we are coming back next year, bigger and better," executive producer and former Eagles linebacker Connor Barwin tweeted in response to the album's success.

According to Barwin, the team hoped to raised $30,000 for charity through album sales, with all proceeds benefitting Philadelphia's Children’s Crisis Treatment Center. As of Dec. 20, the tally was more than $250,000.

The Eagles also released a mini-documentary about the making of the album.

The album features the players' renditions of classic hits like "White Christmas," "Christmas (Baby Please Come Home)" and "Merry Christmas Baby." On "Blue Christmas," the players offer their finest Elvis impressions, and during "Santa Claus is Coming to Town," they shout out various Philly neighborhoods.

The Silver Ages, a Philadelphia men's choir contributes a rendition of "Silent Night" that spells out "E-A-G-L-E-S." Beloved Eagles play-by-play announcer Merrill Reese lends his voice to a reading of "The Night Before Christmas."

Stream "A Philly Special Christmas" through the embedded Spotify album below, or on Apple Music.

What do the Billboard charts mean?

The Billboard 200 chart uses a methodology that blends album sales with track equivalent album units and streaming equivalent album units. The independent albums chart reveals the week's most popular albums, by units, released by independent record labels, and the top holiday albums chart ranks the most popular seasonal albums of the week, in units.