'Most famous Philadelphian who never lived': Podcast will explore cultural legacy of the 'Rocky' statue

The six-part series from WHYY debuts Jan. 10 and delves into stories of real-life Philly boxers, examining what it takes to make a monument 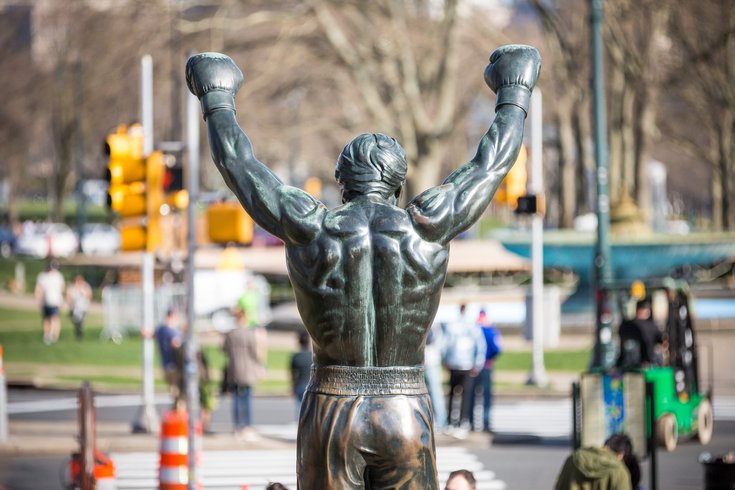 The lasting cultural legacy of the 'Rocky' statue is the subject of an upcoming podcast from WHYY Studios. 'The Statue,' hosted by Monument Labs co-founder Paul Farber, examines the 'Rocky' franchise and tells the story of the monument, its history and its relevance to visitors.

Of all celebrities and artists who have called Philadelphia home, none are as entangled with Philly's cultural identity as Rocky Balboa, the fictional boxer whose series of rises and falls from from obscurity to champion are told in the course of eight films – with a ninth on the way.

In the 46 years since the first "Rocky" movie premiered, it has become one of the most popular franchises in film history. Each year, more than 4 million people make the journey to Philly to visit a destination unlike any other — the "Rocky" statue, a 8 1/2-foot bronze monument near the base of the Philadelphia Museum of Art's steps on the Benjamin Franklin Parkway.

That statue — its history and lasting cultural legacy — is the subject of "The Statue," an upcoming podcast from WHYY Digital Studios. Set to premiere on Tuesday, Jan. 10, "The Statue" examines the "most famous Philadelphian who never lived," exploring the stories of real-life Philly boxers and discussing the importance of the distinct and unique monument to the fictional fighter.

"The Statue" is hosted by Paul Farber, director and co-founder of Monument Lab, a public art and history studio based in Philly.  The organization researches the connections between monuments and the public memory they serve. Though much of the production took place in 2022, Farber began the project just before the COVID-19 pandemic caused shutdowns across the city.

After his mom — herself a native of Northeast and South Philly — advised him to look at the "Rocky" statue as a way to understand the city, Farber took a deep dive into the "Rocky" franchise. He watched every film, as well as any documentary he could find that involved the character in some way. He also read whatever writing about "Rocky" he could find, and looked at artwork that inspired the story.

Each week, he visited the statue, observing how tourists interacted with the monument, and spoke to visitors about why they chose to focus on this statue, out of hundreds installed throughout the city.

"There is a reason why the Art Museum steps are the place of gathering," Farber said. "(Sylvester) Stallone is not alone in believing that, and he really amplified that site. The Art Museum steps have been a place of vigil, uprising, labor strikes, celebrations — it's the ultimate people's pedestal. It's the place to see and be seen. Although there's meaningful art inside, it's the outside that has become really profound. The 'Rocky' statue and the 'Rocky' story are part of that, and when you look at the story, you understand what people bring there and what they take away."

The statue was built by A. Thomas Schomberg in 1981, and debuted a year later with the premiere of "Rocky III." Initially designed to be a movie prop, backlash from the Philadelphia Museum of Art moved it to the outside of the former Spectrum arena. It would return to the Art Museum several times for film production, and again in 2006 following a series of petitions and city hearings.

"There is something particular about the life of a statue that entered the world as a movie prop," Farber said. "They could have made a styrofoam version, something that was meant to be much more ephemeral, but the filmmakers and (Sylvester) Stallone worked with a sculptor to make something in bronze. This monument is both a triumphant and humble symbol. His head is facing down in part because that's the way the film was shot."

"Think about how many monuments replicate paintings and look outward — and therefore are just above us," Farber said. "They're not meant to speak to us on the ground, and this is one that people find immense connection with."

Over the course of six episodes, Farber speaks with Philly residents, tourists, art historians, film crew members and researchers about the history and legacy of "Rocky," the infamous statue on the Parkway and what it means to be a monument.

Farber also discusses the impact the franchise had on film, including its pioneering use of the Steadicam, featured in the iconic scene where Rocky runs up the Art Museum steps, looks out at the skyline and points his fist up at the sky.

The podcast dedicates an entire episode to Joe Frazier, the real-life heavyweight boxing champ who fought in Philly from 1965 to 1981. The first boxer to defeat Muhammad Ali, he actually ran up the Art Museum steps and boxed raw meat at a slaughterhouse long before Balboa.

"There's something going on at the 'Rocky' statue that is profound," Farber said. "People from many backgrounds and political affiliations go to the statue to look for meaning. At the same time, the story of a fictional white, working-class hero in a city of real-life Black boxers is not lost on us, and it wasn't lost on many of the people we spoke to. Joe Frazier was part of the legend."

The podcast pays particular attention to Joe Frazier's Gym, at 2917 N. Broad St., where the heavyweight champ trained for his 1971 fight against Ali. Though the building now operates as a furniture store, it was added to the National Register of Historic Places in 2013. Farber seeks out places — even those far away from the statue itself — in order to paint a broader picture of Philly's boxing legacy and Frazier's story.

"The Statue" premieres on Jan. 10, and new episodes will be released each Tuesday. The podcast will be available through Apple Podcasts, Spotify and NPR One. Listeners can check out the podcast's trailer here.