Sales of the limited-run physical copy, benefitting the Children's Crisis Treatment Center, were cleaned out in two minutes online on Friday 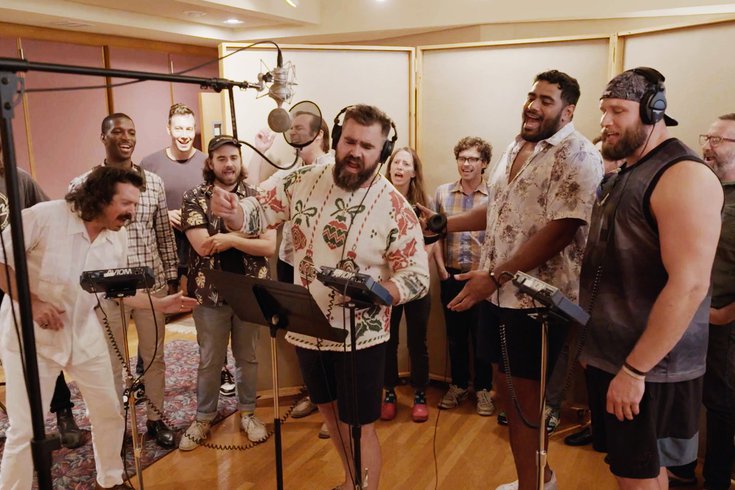 Probably safe to say that the Eagles' offensive line is the hottest act in town right now.

On Friday morning, the limited-run vinyl edition for the much-anticipated "A Philly Special Christmas," the album by Eagles linemen Jason Kelce, Lane Johnson and Jordan Mailata, went on sale for $75 and sold out almost immediately, raising over $100,000 for the Children's Crisis Treatment Center, per former Eagle and the album's executive producer Connor Barwin.

"Your support is helping thousands of children have a Philly Special holiday season," Barwin said in a tweet after the sale ended. "We could not have done this without you."

As soon as sale went live on the album's website, the queue clogged up, and many never even had a chance to click checkout before the inventory was wiped clean. Copies of the album already have been listed on eBay at asking prices upwards of $250. Two listings are selling what appear to be albums with covers autographed by Kelce, Johnson and Mailata, priced at $2,300 and $4,300. And another listing – for $595 – promises the sale "benefits charity" but does not indicate any connection to Barwin of the Children's Crisis Treatment Center.

Some who missed out, understandably, weren't happy, and many made their complaints known over social media.

All I want for Christmas is A Philly Special Vinyl, I missed the preorder and couldn’t make it this past weekend 😭😭 Look at the resellers ! @JasonKelce @LaneJohnson65 @jordan_mailata pic.twitter.com/vshbdfiIHU

"To those who logged on today and tried unsuccessfully to make a purchase, we are so sorry," Barwin tweeted. "No one likes this, and we do care. But we want to make it up to you. We are releasing additional behind the scenes footage of the album recording, which will be available in the coming weeks on our website and Instagram.

"We ended up selling six times the number of albums originally anticipated, and this final batch sold out in 120 seconds. Unfortunately, due to timing and production reasons, we are unable to make any more albums before the holidays."

Barwin also added that digital copies can be purchased through Apple Music with the proceeds still benefiting Children's Crisis Treatment Center, which provides behavioral health services to children who have been abused and neglected.

He also promised that the group would be back for another holiday collection of songs next year, "bigger and better," but "until then, we have eight more games to win."