Blast of arctic air, snow will make its way to Philadelphia this week 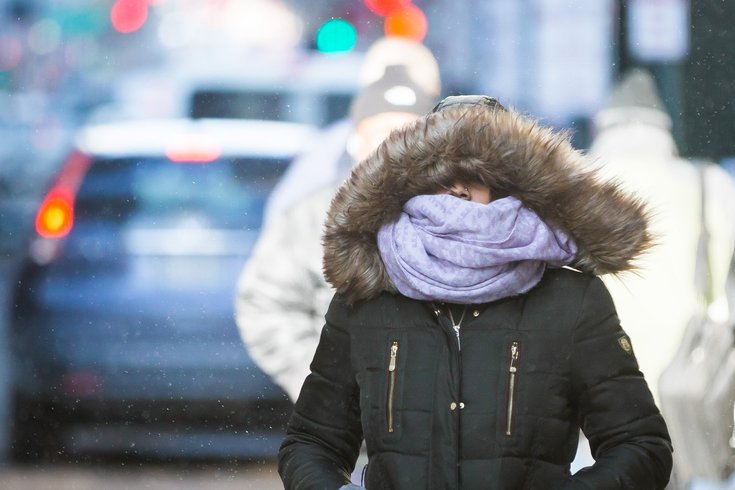 A blast of arctic air is expected to make its way through to Philadelphia. The temperature will drop from a high of 42 in the early morning hours on Tuesday to a low of 22 by night. A wintery mix of snow and rain is expected after 11 a.m.

Snow, freezing rain, and some of the coldest temperatures we've seen since last winter are heading toward Philadelphia starting Tuesday, according to the National Weather Service.

Tuesday will begin with a high of 53 in the early morning hours, but it will end with a bitter low of 22 degrees as a blast of arctic air makes its way from the plains of the Midwest to the East Coast. This surge of cold weather that will extend as far as the deep South could bring snow and wind gusts to Philadelphia.

Rain will begin in the early morning hours of Tuesday before shifting around 11 a.m. to possible mix of rain and snow. Winds between 10-14 mph from the northwest are expected to hit Philly with gusts as intense as 26 mph. Thankfully, the snow is not expected to accumulate (yet ... we all know it's coming).

The rest of the week will remain chilly, especially on Wednesday, when the high will barely top freezing at 33 degrees. It'll get warmer Thursday and much more seasonable Friday when there will be a break from the arctic air with a normal autumn high of 51 degrees.

This arctic blast will blanket Philly 10 days earlier than it had in 2018, when the region experienced the coldest Thanksgiving in two decades.

Here's a look at the full NWS weather forecast for the rest of this week:

MONDAY: Partly sunny, with a high near 61 and a low of 51. There will be a southwest wind around 5 mph in the afternoon.

TUESDAY: Chance of rain between the morning hours of 2 a.m. and 4 a.m. Rain is likely after 4 a.m and will continue throughout the morning. A wintery mix of rain and snow is expected to begin just before 11 a.m. Temperatures will fall to around 35 degrees by 5 p.m. Northwest wind gusts are expected between 10-14 mph, with some gusts as high as 26 mph. Little or no snow accumulation is expected. The low will reach 22.

WEDNESDAY: Sunny but cold, high temperature around 33 degrees. There will be a lingering northwest wind between 9-13 mph. Nighttime will mostly be clear with a low of 25.

THURSDAY: Partly sunny, with a high temperature near 43 degrees. Thursday night will be mostly cloudy with a low of 33 degrees.

FRIDAY: Sunny, with a high around 51. Friday night will be mostly clear with a low around 32.

SATURDAY: Sunny, with a high temperature around 44 degrees. Saturday night will be partly cloudy with a low around 31.

SUNDAY: There will be a 30% chance of rain. Sunday will remain partly sunny, with a high around 50 degrees.