'It is very hard to do science when some of the data you need might be on a CD in someone’s backpack or on someone’s hard drive,' says the company's CEO

For those who suffer from recurrent epileptic seizures – caused by abnormal bursts of electrical activity in the brain – those symptoms can be frightening.

Imagine not knowing when your next seizure will hit.

One of the world's largest medical technology companies is trying to take the guesswork out of epilepsy treatment and care.

An estimated 3 million Americans and 65 million people worldwide live with epilepsy, according to the Epilepsy Foundation. It is the fourth most common neurological problem with 1 in 26 people in the United States developing it during their lifetime. At least 200,000 people receive the diagnosis each year.

But Medtronic is developing a next-generation neurostimulation device to reduce the frequency and severity of epileptic seizures. The hope is that with the right tools, the device could track a patient’s seizure frequency and clinical conditions enabling a more personalized therapy.

The medical device manufacturer has turned to a Philadelphia tech startup to help manage the whirlwind of data that can lead to such medical breakthroughs.

Blackfynn, based in Center City, was founded in 2015 by a multidisciplinary team of experts in neurology, neuroscience, computer science, medicine and engineering from the University of Pennsylvania. In collaboration with the Mayo Clinic, Penn and Medtronic, the company is managing pilot test data in real-time and developing an "interactive seizure diary" for the investigational, implanted RC+S device.

The work has been funded by a five-year grant from the National Institutes of Health. The goal is "programmable, rechargeable, therapeutic neurostimulation" for epilepsy patients, according to Blackfynn, which will track patients’ seizure frequency and clinical condition. Ultimately, the data will lead to better patient outcomes via personalized therapy for individual patients.

“By individualizing the device for each patient, we can offer better quality of life and better therapeutic outcomes,” Amanda Christine, M.D., president and co-founder of Blackfynn says.

The partnership is just one of the ways Blackfynn is trying to use advanced computer technology to improve treatment and care of patients with neurological diseases. Worldwide, one in seven people has a neurologic disease without any effective treatment. 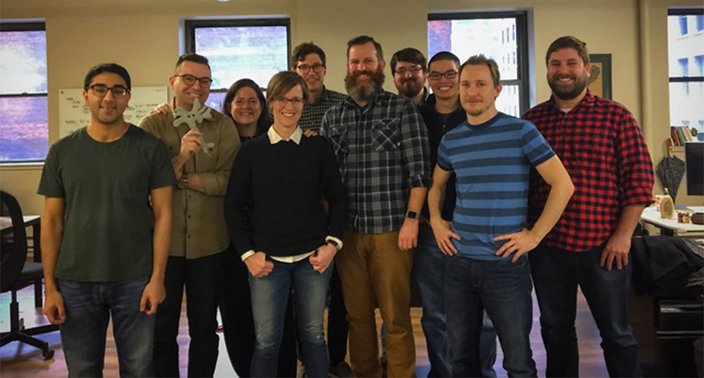 HELPING TO FIND PATTERNS IN DATA

For Christini and her co-founders, Brian Litt, a Penn professor of neurology and biomedical engineering, Zack Ives, a Penn professor of computer science, and Joost Wagenaar, an engineer and neuroscientist who left Penn to join Blackfynn, one of the biggest challenges faced by scientists studying human disease is the management of large, complex datasets generated in labs and clinical settings. Typically, all that valuable information tends to get stuck in silos or locked away in proprietary formats, making collaboration and analysis difficult.

“It is very hard to do science when some of the data you need might be on a CD in someone’s backpack or on someone’s hard drive,” she says.

“Until we use all the data that we throw away, we will never solve fundamental challenges in health care.” – Amanda Christini, CEO and co-founder, Blackfynn

Blackfynn's principals believe strongly that the ability to find patterns in complex data is central to improving therapeutics for human disease.

The lack of centralized, accessible data is a broad problem in medical research, Christini says. “It is a need that is felt every day not just by our founders but the entire community."

Blackfynn's founders, led by Litt, did early work on a related platform under an NIH grant which led to ieeg.org, a platform to share EEG data.

To ease access to neurological research data, Blackfynn developed an open architecture platform to act as a central hub for all of its partner organizations. The platform integrates the partners’ complex neurological data in one place, facilitating the sharing of that data, tools and expertise between researchers.

The platform converts data into a format than can be viewed, annotated and analyzed by authorized users. Partners and users pay for access to their own data on the cloud-based platform, which is accessible from anywhere.

Blackfynn, named one of Philly Mag’s Top 10 tech companies to watch in 2017, is making a name for itself not only in the tech world but in neurology as well. It has raised more than $3.5 million of funding and was awarded a $1.4 million contract by the Defense Advanced Research Projects Agency (DARPA). Meanwhile, it has grown to a staff of 11 that includes scientists and data and software engineers.

Blackfynn has also partnered with the Children’s Brain Tumor Tissue Consortium (CBTTC) led by Children’s Hospital of Philadelphia (CHOP), which is using the platform to access data and conduct analyses related to the study of pediatric brain tumors.

It is also part of the Epilepsy Study Consortium (ESC), a group of scientific investigators from academic medical research centers working to accelerate the development of new therapies to improve patient care.

Blackfynn and CHOP recently announced they are expanding their relationship. The Blackfynn data platform will be used by CHOP and the CBTTC to bring together non-identifiable patient data, including pathology, imaging, genomics, EEG, and other clinical data, for collaboration and analysis.

It is also working with Persyst, a developer of clinical electroencephalogram software, on creating better EEG-data sharing tools.

“Data can crack open the science if you have the right tools,” Christini said. “Until we use all the data that we throw away, we will never solve fundamental challenges in health care.”