Fact check: Are there more 'cuck' video searches in red or blue states?

The term is wielded as an anti-liberal insult, but who is watching more of it online? 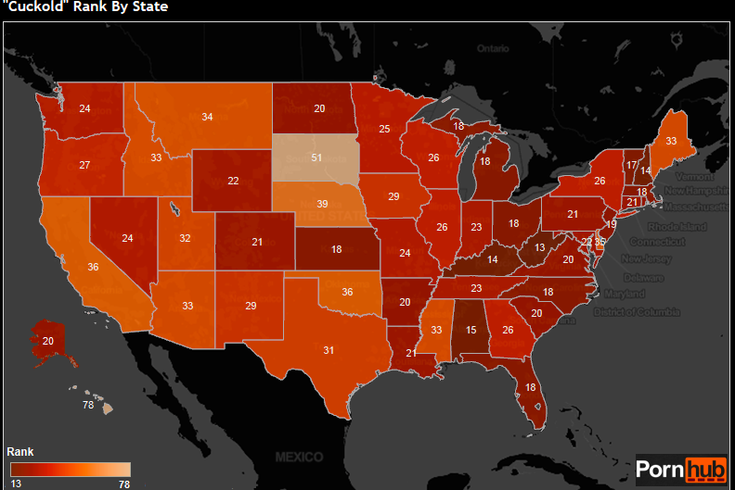 A website tracked how many people searched for a certain type of pornography by state.

Through the course of the always-enlightening political discourse that’s swept America this presidential-election cycle, you may well have seen and/or heard the word “cuck” wielded as an insult.

If you haven’t, consider yourself lucky. If you have, you know it’s a term of emasculation, primarily meant to insult the machismo of men who fall on the liberal side of the political spectrum by those who fall on the right (and, to a lesser extent, vice versa).

This is a family website, so I won’t embed a video of cuck’s pornographic underpinnings. If you’re so inclined, add “old” to the end of the word and roll the NSFW dice.

The site established numbers of searches for said content, and then broke it down by state.

From there, I checked out Gallup tracking data released in February which tracked which states are solidly red, leading red, solidly blue and leaning blue.

The purpose of this scientific analysis was to determine whether those who called others “cucks” were from places aligned with a political-leaning demographic more prone to, you know, watching that kind of salaciousness.

And what did I find?

Of Pornhub’s top five “cuck states,” three were red (West Virginia, which led the search list; New Hampshire and Alabama), one blue (Vermont) and one somewhere in between (Kentucky).

When you crunch the numbers of all red states vs. blue states (strong or leaning), it seems that users in red states are more inclined to search for cuck videos. Overall, on average, it was the 26th most popular search in red states while in blue states, it came in 29th. So, glass houses and all that, I guess.

And that’s all for today in how pornographic-search trends align with politically charged insults in this crazy election year.