Playing the long game: Eds and meds development in Camden 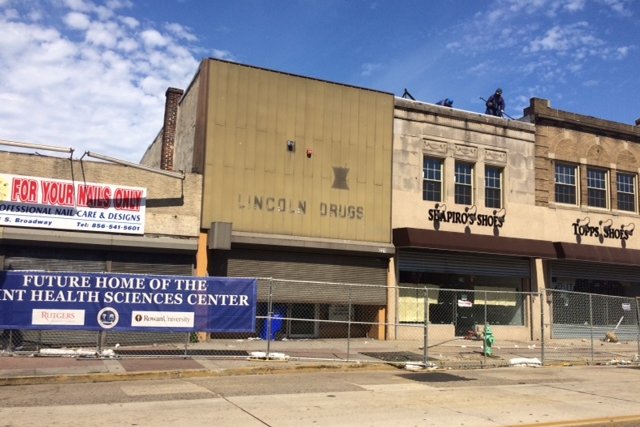 Demolition of a block of Broadway is beginning with the goal of constructing a 65,000 sqare foot center that serves the community and educates in the medical field, the fastest growing segment of the economy.

At Broadway and Stevens Street in Camden this week, there was no ribbon cutting. No golden shovels. No TV cameras.

But the signs of progress were obvious.

A crew diligently worked on the roofs of a row of vacant stores lining Broadway, preparing an entire block of scrubby downtown Camden for demolition – and rebirth.

Instead of a press conference, their presence was instead only alluded to in a matter-of-fact report.

The document, “Eds and Meds as an Economic Engine for the City of Camden and the State of New Jersey,” – a familiar stanza in Camden – laid out plans for a Joint Health Science Center.

It’s one of the tangible results of the Rowan University/Rutgers-Camden Board of Governors, which was created in 2012 with the goal of leveraging the strengths of each institution to create an “eds and meds” zone in the poorest urban center in America.

Kris Kolluri, the CEO of the board for the past two years, explained to PhillyVoice Wednesday that the combined board is looking for ways to benefit the city that go beyond 9 a.m. to 5 p.m. business, with development aimed only at jobs held by suburban commuters to the city.

“We’re playing the long game in a challenging environment. We want to do what is measurable and accountable and want to go back and look at what we are doing and see what worked – and what didn’t,” Kolluri said.

As an example, he pointed to a medical assistant program created by the board.

In its first run, there were 10 students. Five dropped out, even though it was just a three-month accreditation program, which could have led to almost-for-sure job offers, a livable wage and health benefits, all in scant supply for Camden residents.

After a year working as a medical assistant, there’s even a supported-pathway to a college degree – and yet 50 percent of the students fell out of the program.

Re-evaluating the program’s results, there is now a social worker assigned to the program and two days a week are now devoted to the educational and life-skill basics, said Kolluri.

“It’s an academic challenge,” he said of the students in Camden’s pipeline.

When the joint board’s new center is completed and opened in 2018, an expanded medical assistant program will be a keystone of the 65,000-square-foot center, built with $50 million from New Jersey and $2 million from Rutgers and Rowan.

Kolluri said the center will mean change for Camden, but not an overnight transformation – the unmet promise repeatedly ballyhooed in the city.

“It is incremental,” he said of the program and center. “We’re playing the long game.”

He said creating a way for Camden residents to train for decent jobs in the growing medical field could mean building demand for homeownership in the city.

But that will only come over time.

'IT WILL CHANGE OVER TIME'

Clearing the parcel between Martin Luther King Boulevard, Broadway and Stevens and 5th street will take about five weeks.

Design work is underway. That means constructing a visually striking science building that still fits and interacts with the neighborhood, Kolluri said.

Construction will likely start in February.

Other programs at the center will include: a diabetes research project, a doctoral program in occupational therapy, and medical outreach to the community.

A second phase including research, training and, potentially, business incubation and conference spaces is set for an adjoining block on Broadway.

From a window seat facing Broadway on that block, Dina Lopez has watched the flow of humanity wash by for 10 months.

Many of those passing are either drug-addicted or drug-addicted sex workers, heading to a methadone clinic or a transportation center a few blocks away

A retail clothing store worker, Lopez said her store gets no traffic from the nearby Cooper Medical School of Rowan University or Camden Community College.

Those students just aren't her store's market. "They walk straight to Barnes & Noble," she said.

But she thinks her store could draw clients from students involved in the programs planned for the center, programs focused on job opportunities for locals.

“It will change over time,” she said, echoing Kolluri’s promise of incremental change. “Not right away."

“And then the drama will calm down,” she said, gesturing toward the street outside.