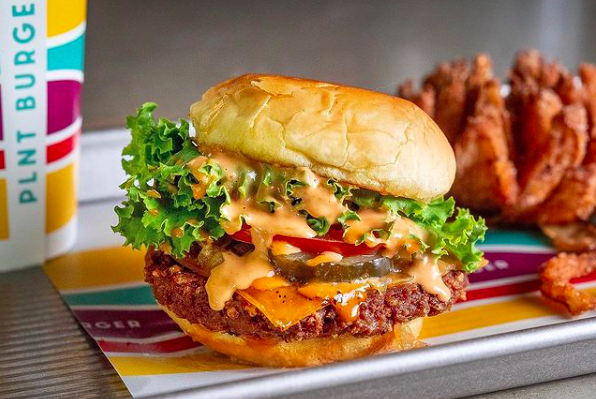 PLNT Burger opens May 14 inside the Whole Foods Market in Jenkintown, Pennsylvania. The restaurant features a menu of plant-based burgers and sandwiches that use Beyond Meat products.

Jenkintown will soon have a new plant-based restaurant inside the local Whole Foods Market with the arrival of PLNT Burger, a concept from restaurateur and former "Top Chef" competitor Spike Mendelsohn.

The Jenkintown location is the rising startup's eighth restaurant and second in Pennsylvania after another PLNT Burger opened at the Whole Foods Market in Wynnewood last July.

Pronounced "Planet Burger," the restaurant features a menu built around Beyond Meat patties and sausages used on burgers and sandwiches, along with other plant-based snacks, shakes and cookies.

The location in Jenkintown will offer outdoor patio seating as well as delivery and take-out options available through the PLNT Burger website and app.

Mendelsohn, a Canadian chef based in Washington, D.C., has opened several popular restaurants in the nation's capital and hopes to see PLNT Burger expand across the region. He has said the restaurant is targeted to anyone who might want an alternative to red meat to enjoy classic comfort foods, not just vegans and vegetarians.

The company recently announced the hire of its first CEO, Ben Kaplan, who co-founded PLNT Burger.

"Our vision has been to create the best burgers on the planet and for the planet," Kaplan told QSR Magazine. "By creating delicious food that will satisfy even the most discerning carnivores, we are changing the way people eat their veggies. And we’re helping people reduce their carbon footprint and improve their health one bite at a time."

The PLNT Burger in Jenkintown, located in Whole Foods Market at 1575 The Fairway, is set to open May 14. The restaurant will be giving away 100 free burgers to the first people who attend the grand opening.