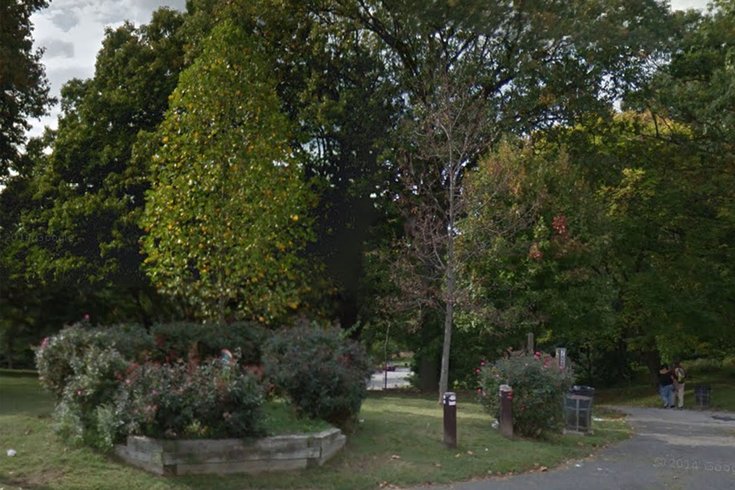 The wooded area at Cobbs Creek Parkway and Catharine Street in West Philadelphia.

Read More
A West Philadelphia woman accused of abandoning her quadriplegic son in the woods of the Cobbs Creek park for multiple days is currently in a Maryland hospital for undisclosed reasons.
An arrest warrant for 41-year-old Nyia Parler has been signed, however police in Montgomery County, Maryland must wait for doctors to clear her before they can make an arrest, NBC 10 reports. Following her arrest, she will be taken to court for an extradition hearing.
Police say Parler's 21-year-old son, who was discovered on Friday night, has cerebral palsy and is confined to a wheelchair. Without verbal communication skills, he  had been left with no means to alert passersby of his whereabouts since at least Monday.
A man walking along a trail at 59th Street and Cobbs Creek Parkway noticed the victim's wheel chair and contacted police. Authorities say that his mother laid him on the ground in the woods, about 100 feet off the roadway, with nothing more than a blanket and a Bible.
Concerns about the young man first arose when officials at the special needs School of the Future, located on 40th Street and Parkside Avenue, noticed his absence and called his mother. Unable to reach her, they then called his aunt, who got in touch with the mother in Silver Spring. She had left to visit a boyfriend there.
Parler lied to both her family and police, saying her son was with her in Maryland.
Parler is expected to be charged with aggravated assault, simple assault, and reckless endangerment, among other charges.
The victim was taken to Children's Hospital of Philadelphia, where he is in stable condition and receiving treatment for dehydration, malnutrition, a cut on his back, and exposure to the weather.
According to police, the mother also has a 16-year-old child who is now staying with other members of her family. The victim's relatives are reportedly being interviewed about his medical history and his mother.
Check back for updates on this developing story.