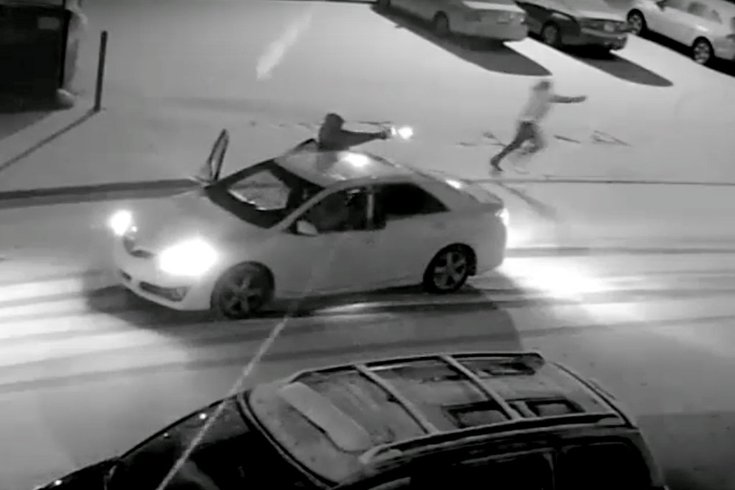 Police are searching for suspects in a shooting on Sunday n the 200 block of East Armstrong Street. The occupants of a 2012-2015 white Toyota Corolla were captured on video surveillance firing multiple times at an unknown victim, police said.

Police are searching for four men who shot up an Northwest Philadelphia street overnight Sunday.

While snow fell on the 200 block of East Armstrong Street in East Germantown at about 1 a.m. Sunday, the occupants of a 2012-2015 white Toyota Corolla were captured on video surveillance firing handguns multiple times at an unknown victim, police said.

The video footage show four suspects firing shots at an unknown victim, police said. One suspect chases the victim down the street on foot toward Baynton Street, firing the entire time. The offenders then fled in the Toyota toward Rubicam Street.

Numerous residents of the area called police the next morning to report bullet holes in homes and vehicles, police said.

A victim was not located and Northwest Detectives is also attempting to identify the individual who was being shot at.

The suspects were male, apparently about 20 years old, wearing dark-colored clothing and blue jeans, according to police. The vehicle is possibly a 2012-2015 white Toyota Corolla sedan.

If you have any information about the crime or suspects, please contact the Northwest Detective Division at 215-686-3353/3354.